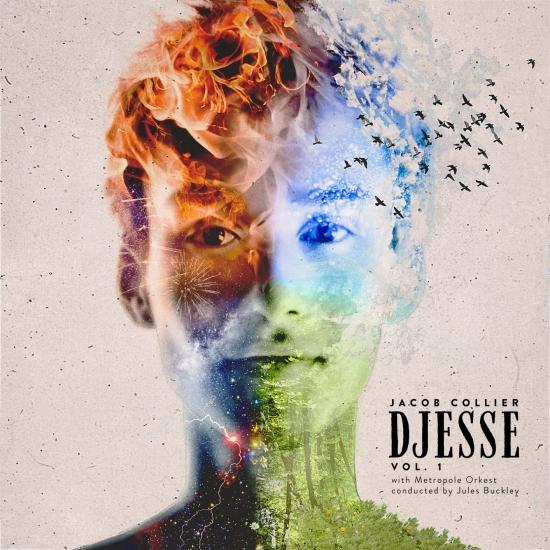 Multi-instrumentalist, singer, composer, arranger, producer and 2-time GRAMMY winner Jacob Collier is embarking on a journey that few musicians have attempted. The follow-up to his 2016 debut album is Djesse, a 40-song, 4-volume exploration of the mind of one of music’s finest young talents that traverses different musical worlds in astonishing ways. Djesse (Decca/Geffen/Universal Music Canada, the country’s leading music company) was written, produced and engineered by Collier, composed entirely during 2018, and features contributions from a global cast of his musical inspirations.
Volume 1 is ecstatic and whimsical, a dazzling collaboration with storied Dutch ensemble Metropole Orkest under the direction of Jules Buckley. Collier began this project in earnest on New Year’s Day, 2018. He awoke and Djesse began with Collier capturing the feeling of dawn and a new year with the limitless possibilities of orchestral music. It features Voces8 (on the opening track, “Home Is”), Take 6, Laura Mvula and the Moroccan gnawa musician Hamid El Kasri.
“Everlasting Motion” features Hamid El Kasri, a master of gnawa: an ancient form of Moroccan street music with a hypnotic rhythm. After learning about El Kasri, and a significant search for his contact information, Collier emailed him. Nearly three months later he received a response, then booked a flight to Morocco to meet and record with him. Collier’s curiosity and openness to seek out these musical relationships and enable them to seep into his singular vision is central to the project.
Djesse is a celebration of the imagination, a lushly vivid snapshot of Collier’s musical mind as he’s experienced the world in 2018. This project brings Collier’s bedroom, where he’s lived since age one and created and recorded most of his music, to the globe. In making it, he recorded in his bedroom as well as in NYC, Los Angeles, Nashville, Abbey Road, Holland, Morocco and Japan. Pre-order Volume 1 HERE.
As the volumes are revealed, different textures, themes and sounds will be explored. Collier imagined Djesse as a grand journey through space and time, and each volume follows along this path. In addition, across the quartiles nearly two-dozen collaborators will be featured, from pop stars and folk songwriters to guitar wizards and soul singers. Collier stands at the centre of it all, putting himself in conversation with the musical world at large.
Jacob Collier, vocals
Metropole Orchestra
Metropole Orkest
Jules Buckley, conductor