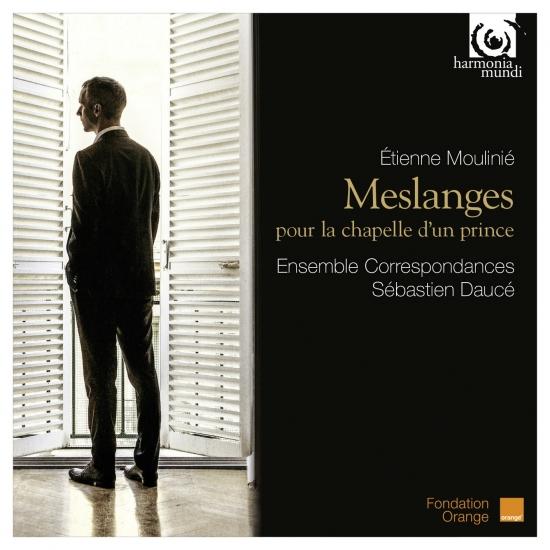 For more than 30 years, the career of composer Étienne Moulinié was inseparably linked with the patronage of Gaston d'Orléans (1608-60), brother of Louis XIII. Moulinié provided the music for the prince’s family from 1627 to 1660, leaving a varied and original oeuvre. Although his secular music is well known, his sacred output, most of it contained in a collection published in 1658 from which this recording presents some of the finest pieces, is still neglected, despite its great beauty, its individuality, and its importance for the development of mid 17th-century French music.
Despite several announcements, Moulinié was never to carry out his intention of publishing further volumes, probably hindered from doing so by the death of his patron in 1660. 'The Mélanges de sujets chrétiens' (Anthology of Christian subjects, canticles, litanies, and motets, set to music in two, three, four, and five parts, with a figured bass) is therefore all the more precious in the insight it gives into the music of one of the most original composers of the Grand Siècle at the height of his artistry.
Excellent booklet note by Thomas Leconte of the Centre de Musique Baroque de Versailles.
„Assured soloists are drawn from the ranks of the dozen-strong choir, and their fluent solo passages and glorious choral textures combine sumptuously with a compact yet sonorously varied instrumental group of recorders, viols, lute, theorbo and organ...such miniature pieces are capable of real grandeur in the right hands.“ (Gramophone Magazine)
„The performances are of breathtaking beauty. As a group, the Ensemble is lithe and supple, reacting sympathetically to every nuance of Moulinie’s expressive, text-driven writing. Individually, its 12 voices are remarkably fresh and secure…this disc presents a perfect marriage of sublime music and outstanding musicianship“ (International Record Review)
„this may seem to be obscure repertoire but it is significant in the overall development of the French motet which was to culminate in those huge settings by Rameau. With such cultured, sensitive and beautifully moulded performances this is a notable and delightful disc that is well worth investigating.“ (MusicWeb International)
Ensemble Correspondances
Sébastien Daucé, harpsichord, organ. direction