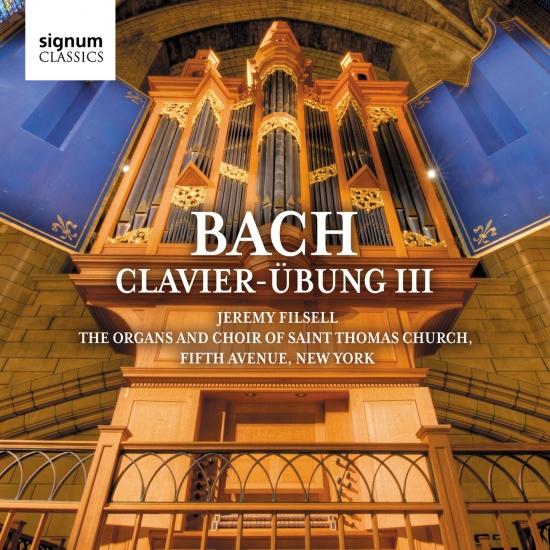 The monumental third part of the Clavier-Übung (1739) is perhaps one of J S Bach’s greatest musical sequences with its explorations into both Lutheran hymnody and the ‘German Organ Mass’. As a didactic work, it also pursues virtually every contrapuntal device and structure. In giving voice to this immensely varied work, fascinating, inspiring and spiritual in equal measure, it seems particularly apt to make through it an ‘organ tour’ of Saint Thomas Church, with its rich and rewarding instrumental resources.
The Clavier-Übung (‘keyboard practice’) is the third of four volumes similarly entitled, yet is the only one conceived for organ, the other three being for harpsichord. Bach’s title page reads: 'Third Part of Keyboard Practice, consisting of various preludes on the Catechism and other hymns for the organ. Prepared for music-lovers and particularly for connoisseurs of such work, for the recreation of the spirit, by Johann Sebastian Bach, Royal Polish and Electoral Saxon Court Composer, Capellmeister and director of the chorus musicus, Leipzig'. Between the opening and closing Prelude and Fugue in E flat major (BWV552), there are 21 chorale preludes (BWV669-689), forming the Lutheran Mass and catechism, succeeded by four ‘duets’, BWV802-805. Clavier-Übung III is extraordinarily wide-ranging and demanding in its expression, extending from stile antico modal creations (harking back to the music of Frescobaldi and Palestrina) through extended chromatic pieces, daunting six-part contrapuntal edifices, to progressive mid-18th-century galant styles, evident in the more dance-like chorales.
Although Clavier-Übung III is not simply a miscellaneous collection of works, there has always been speculation as to whether or not it forms a genuine cycle. Bach’s references to Italian, French and German music within the collection seem to indicate a tradition of the Tabulaturbuch, of which there is an earlier example by Elias Ammerbach, one of Bach’s predecessors at the Thomaskirche in Leipzig. Moreover, his immediate musical precursors Buxtehude, and in France, Couperin and de Grigny, all collated series of individual pieces within similar compendia.
The Mass and Catechism settings of Clavier-Übung III correspond to parts of the Sunday worship in contemporaneous Leipzig, found in the morning Mass and then in the afternoon Catechism. This liturgical progression centred on the Ten Commandments, the Creed, Prayer, Baptism, Penitence and Communion. Luther’s hymn book (originally published in 1526) contains all the hymns found here, some of them Gregorian in origin, and Bach adopted them in Clavier-Übung III as a musical homage to the principles of Lutheranism.
It was Christian Wolff (Bach: Essays on His Life and Music, 1991) who identified a clear cyclic order to Clavier-Übung III, where the prelude and fugue frame three groups of pieces: the nine chorale preludes based on the Kyrie and Gloria of the Lutheran mass are followed by six pairs of chorale preludes on the Lutheran catechism, followed by the four duets. Each group possesses its own internal structure; the first is made up of three groups of three (in stile antico), succeeded by three short versets on the Kyrie. In the third group, three trio sonatas are based on the German Gloria with a progression of keys through F major, G major and A major. Each pair of the catechism chorales then has a setting for two manuals and pedal followed by a smaller-scale manualiter fugal chorale. The group of 12 catechism chorales is further broken up into two groups of six, arranged around the pivotal plenum settings of Wir glauben all an einen Gott and Auf tiefer Not. The four two-part duets are then related by successive key progressions E minor, F major, G major, and A minor. Thus, Clavier-Übung III comprises a complex structure of triptychs and pairs, creating an elaborate but perhaps perceptible symmetry. There is also an overarching numerological symbolism; the nine mass settings (3 × 3) can be seen to attest to the Trinity with references to Father, Son and Holy Ghost in the corresponding texts. The number twelve (the catechism chorales) arguably represents the number of disciples (12 being a common Ecclesiastical number), and the whole compendium comprises 27 pieces (3 × 3 × 3).
Peter Williams in The Organ Music of J S Bach (2003) suggests the presence of the golden ratio in Clavier-Übung III; the division of bars between the prelude (205) and fugue (117) being just one example. In the fugue itself, its Trinitarian division falls into 36, 45 and then 36 bars (the golden ratio being that found between the middle and outer portions). Moreover, the midway point of the central section is characterized by the initial appearance of the first subject against a veiled form of the second. There are further golden section ratios to be found in Vater unser in Himmelreich, BWV682.
The Saint Thomas Choir of Men and Boys
Fifth Avenue, New York
Jeremy Filsell, organ, conductor 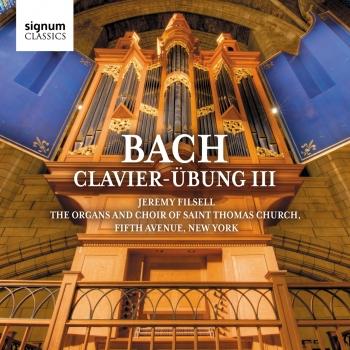 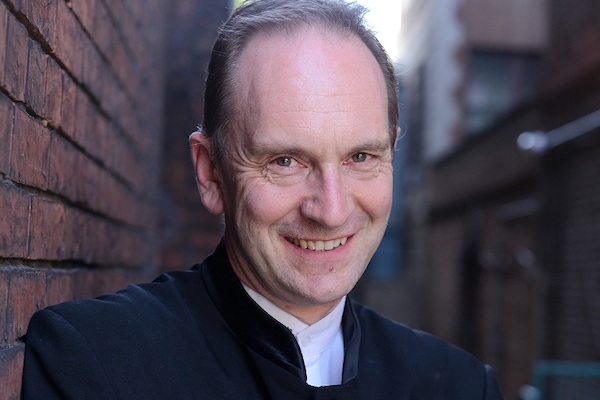 Jeremy Filsell
is one of only a few virtuoso performers as both pianist and organist. He has appeared as a solo pianist in Russia, Scandinavia, New Zealand and Australia and throughout the USA and UK. His concerto repertoire encompasses Bach, Mozart and Beethoven through to Shostakovich, John Ireland, Constant Lambert and the Rachmaninov cycle. He has recorded the solo piano J&R 99 (2)music of Herbert Howells, Bernard Stevens, Eugène Goossens and Johann Christoph Eschmann and recent releases include discs of Rachmaninov’s solo piano music (Signum), the first two Rachmaninov Concerti (Raven) and the piano music of Francis Pott (Acis).
Jeremy is on the international roster of Steinway Piano Artists and has recorded for BBC Radio 3, USA, and Scandinavian radio networks in solo and concerto roles. His discography comprises more than 35 solo recordings. Gramophone magazine commented on the series of 12 CDs comprising the premiere recordings of Marcel Dupré’s complete organ works for Guild in 2000 that it was one of the greatest achievements in organ recording. In 2005, Signum released a 3-disc set of the six organ symphonies of Louis Vierne, recorded on the 1890 Cavaillé-Coll organ in St. Ouen, Rouen. He has taught at universities, summer schools, and conventions in both the UK and USA and has served on international competition juries in England and Switzerland. Recent solo engagements have taken him across the USA and UK and to Germany, France, Finland, Sweden, Norway, Australia and New Zealand. In North America, he concertizes under the auspices of Philip Truckenbrod Concert Artists.
As a teenager, Jeremy Filsell was a Limpus, Shinn & Durrant prizewinner for FRCO and was awarded the Silver Medal of the Worshipful Company of Musicians. As a student of Nicolas Kynaston and Daniel Roth, he studied as an Organ Scholar at Keble College, Oxford before completing graduate studies in piano performance with David Parkhouse and Hilary McNamara at the Royal College of Music in London. His PhD in Musicology from Birmingham City University/Conservatoire was awarded for research involving aesthetic and ATH 20interpretative issues in the music of Marcel Dupré. Before moving to the USA in 2008, he held Academic and Performance lectureships at the Royal Academy of Music in London and the Royal Northern College of Music in Manchester, and was a lay clerk in the Queen’s choir at St. George’s Chapel, Windsor Castle. He combined an international recital and teaching career with being director of music at the Church of the Epiphany and then of St. Alban’s in Washington DC, Artist-in-residence at Washington National Cathedral, and Professor of Organ at the Peabody Conservatory (Baltimore), before moving to New York in April 2019 to become Organist & Director of Music at the Church of St. Thomas, 5th Avenue.