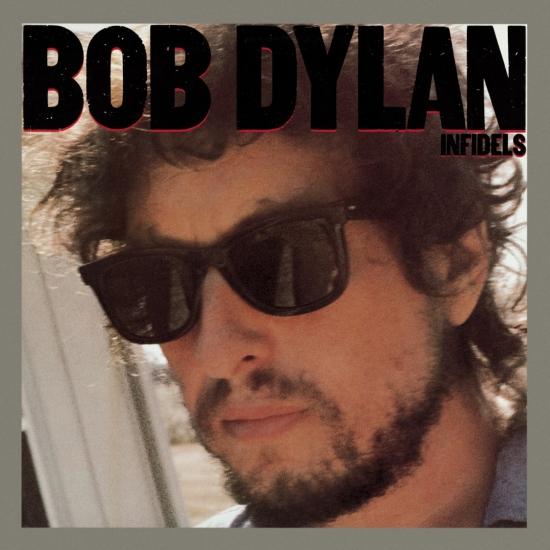 After using "Slow Train Coming", "Saved" and "Shot Of Love" as sounding boards for his born-again Christianity, Bob Dylan took a trip to Israel amidst rumors that he was repudiating his new faith and embracing his Judaic roots. Upon returning from his overseas excursion, Dylan went straight into the studio with co-producer Mark Knopfler and emerged with "Infidels", a record that found the legendary singer-songwriter recording songs that were more of a political nature than a religious one.
Backed by a band that includes Knopfler and ex-Stone Mick Taylor on guitar and the legendary reggae rhythm section of Sly Dunbar and Robbie Shakespeare, Zimmy's biting songs don't lack for solid musical support. Speaking out with conviction, Dylan uses the hard-driving "Neighborhood Bully" to praise Israel's fortitude amidst a sea of hostile Arab relations, while the feisty troubador rips into corporate greed within the barrage of twangy country guitar that defines "Union Sundown." "Jokerman," one of Dylan's most enduring songs, offers a flirtation with reggae, with Dylan blowing away on harmonica as Knopfler provides the perfect accompaniment with his distinctive guitar work.
"Infidels was the first secular record Bob Dylan recorded since Street Legal, and it's far more like a classicist Dylan album than that one, filled with songs that are evocative in their imagery and direct in their approach. This is lean, much like Slow Train Coming, but its writing is closer to Dylan's peak of the mid-'70s, and some of the songs here -- particularly on the first side -- are minor classics, capturing him reviving his sense of social consciousness and his gift for poetic, elegant love songs. For a while, Infidels seems like a latter-day masterpiece, but toward the end of the record it runs out of steam, preventing itself from being a triumph. Still, in comparison to everything that arrived in the near-decade before it, Infidels is a triumph, finding Dylan coming tantalizingly close to regaining all his powers." (Stephen Thomas Erlewine, AMG)
Bob Dylan, guitar, harmonica, keyboards, vocals
Additional musicians:
Alan Clark, keyboards
Sly Dunbar, drums, percussion
Clydie King, vocals on "Union Sundown"
Mark Knopfler, guitar, production
Robbie Shakespeare, bass
Mick Taylor, guitar
Recorded at the Power Station, New York, New York Produced by Bob Dylan, Mark Knopfler
Digitally remastered
Please Note: We offer this album in its native sampling rate of 48 kHz, 24-bit. The provided 96 kHz version was up-sampled and offers no audible value! The source files come from an extracted SACD.