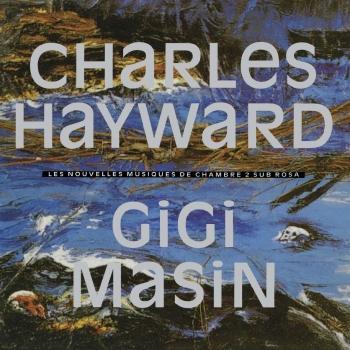 Charles Hayward
is known as the pioneering drummer with This Heat ("Out of cold storage" cd boxset recently released) and Camberwell Now, an ever growing list of solo concerts and cds [most recent release "Abracadabra Information" on Locus Solus label], special collaborative performances, and is in Massacre with Bill LASWELL and Fred FRITH.
Committed to song 'but the shapes have to change', his current one-man show is an intoxicating mix of percussive attack, swirling electronics and lyrical fragment collage.
Charles Hayward (born 1951) is an English drummer and was a founder member of the experimental rock group THIS HEAT.
He also played with Mal Dean's Amazing Band, Radar Favourites, Dolphin Logic, and gigged and recorded with Phil MANZANERA in the group QUIET SUN project as well as a short stint with GONG.
In 1976, Hayward and fellow Radar Favourites and Dolphin Logic member, Charles BULLEN began practising with bassist Gareth WILLIAMS under the name This Heat. They began to experiment with tape loops, found sounds and keyboards on several sessions (recorded from 1976 to 1978, but not released until 1979). Finally, in 1979, This Heat released their self-titled debut album. 1981's Deceit marked the final new album from This Heat, Williams leaving just after its release.
While Bullen began working as a studio engineer, Hayward did sessions for Lora Logic, the Raincoats and Everything But the Girl before forming CAMBERWELL NOW with bassist Trefor GORONWY and tape manipulator Stephen RICKARD. The trio released several albums through the Swiss Recommended label.
When Camberwell Now disbanded in 1987 Hayward embarked on a solo career which has continued to the present day. He debuted with Survive the Gesture (1987), Skew-whiff (1989) Switch on War (1991) and My Secret Alphabet (with Nick DOYNE-DITMAS) in 1993.
In 1998, he joined MASSACRE with Fred FRITH and Bill LASWELL.
Throughout the 90's up to the present he has initiated a bewildering array of events and performances , including the widely acclaimed series Accidents + Emergencies at the Albany Theatre, Out of Body Orchestra (too much sound, not enough space, not enough time), music made from the sound of the new LABAN dance centre being built which was choreographed for the official opening, music for a circus (part of the National Theatre's 'Art of Regeneration' initiative), the full-on installation/performance Anti-Clockwise (with Ashleigh MARSH and David AYLWARD) for multiple strobes, maze structure of diverse textures, 2 drummers, synthesizers and your nervous system. Recent developements include the Continuity evenings as part of Camberwell Arts.
Gigi Masin
born in Venice, Italy on 24th October 1955, has been part of the music scene since the early 70’s and a radio dj with the most important radio stations. From 1978 he has been establishing a collaboration with poet/writer Massimo Palladino, a venture that had been permitting to carry out many and wonderefull pieces for theatre, television, radio broadcasting, where music and voice walk hand in hand, challenging and provoking themselves as well. Sounds, tapes, turntables, live electronics are the ground where scene music moves. As musician/director Gigi Masin had a lot of theatrical, cinema and musical collaborations. First solo album 'WIND' has been published in 1986. “LES NOUVELLES MUSIQUES DU CHAMBRE” for the belgian label Sub Rosa (1989) with Charles Hayward, “WIND COLLECTOR” (1991) with Alessandro Monti. Recent works include “LONTANO” (2001) and “MOLTITUDINE IN LABIRINTO” (2003, with Giuseppe Caprioli) produced by Giovanni Antognozzi for Ants Records. Many musicians covered or sampled his music and among the others there's the singer BJORK (the track 'It's In Our Hands' from her Greatest Hits album), german band TO ROCOCO ROT, pianist LUCA MITI and others. New cd will be published (2007/2008) with Diplodisc -Stella*Nera. After that little jewel ('Fricke Out') in ALESSANDRO MONTI first cd 'Unfolk', the collaboration will continue with a new piece in MONTI second cd, out in 2008. In 2008 will be finally released a dvd (title 'ILUSTRAT') of unpublished illustrations, designed for publishing and multimedia purposes, created by painter/designer LUIS FILIPE CUNHA, with the music of Gigi Masin. New tunes (‘The Last Dj’) are now available for free download from italian net label LAVERNA