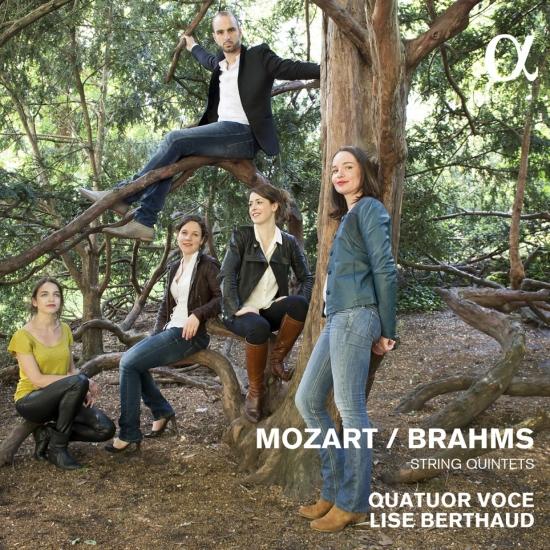 After its first two recordings, devoted to Schubert then Beethoven, highly praised and recommended by the critics (both ffff in Télérama, recommended by The Strad...), this eclectic, innovative quartet is now celebrating its tenth anniversary by tackling the string quintets of Mozart and Brahms.
These two scores, representative of the culmination of a career in the case of Brahms and, for Mozart, the end of a life, are sustained by vigorous inspiration and frothing energy. Whereas the Brahms Quintet, both brilliant and highly moving, recalls some of his best known themes (including that of the Sextet, Op. 18, used by Louis Malle in his film The Lovers), Mozart jotted down on paper the four movements of a work that speaks intensely about him, in the diversity of its moods and the complexity of its writing.
Named ‘Rising Star’ for the last season by the European Chamber Hall Organisation, the Voce Quartet has performed in venues the world over. For this project, it calls on Lise Berthaud, one of the most brilliant French violists, to round out the quintet.
Lise Berthaud, viola
Quatuor Voce 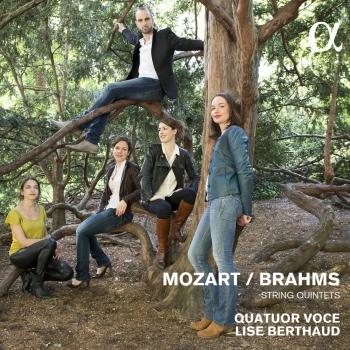 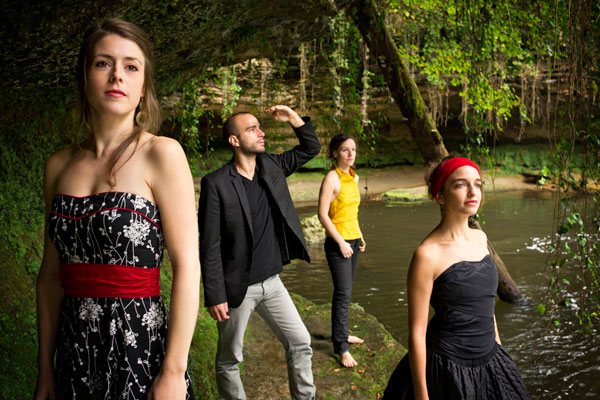 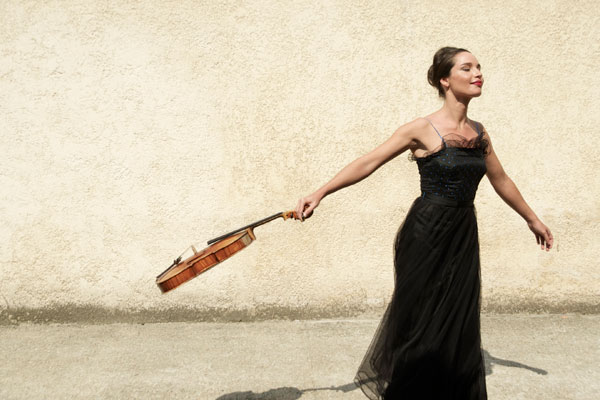 Quatuor Voce
“One of the best French quartets I have heard for some years (...). The Quatuor Voce has every quality that goes to make a good quartet: refinement, beautiful tone, excellent ensemble, precise chording, fine rhythm and loads of character.” Tully Potter, The Strad
In only a few years the Quatuor Voce has received numerous prizes in international competitions, most notably Geneva, Cremona, Vienna, Bordeaux, Graz, London and Reggio Emilia. Giving concerts worldwide, the quartet also works regularly with many outstanding artists such as Yuri Bashmet, Gary Hoffman, Nobuko Imai, Bertrand Chamayou, David Kadouch, Juliane Banse...
Following a nomination from the Cité de la Musique in Paris, the European Chamber Hall Organisation (ECHO) has named the quartet as Rising Stars for the 2013-2014 season.
Since its debut in 2004, the Quatuor Voce has been committed to championing the great repertoire for string quartet, seeking guidance from some of its leading exponents (the Ysaÿe Quartet, Günter Pichler, Eberhard Feltz).
Dedicating its first CD release to the music of Schubert, the recording was the critic’s choice in The Strad and was given 'ffff' in Télérama.
Open to the diverse influences of the world which surrounds them, the Voce regularly work closely on new commissions from modern day composers - Bacri, Cresta, Finzi, Markéas, Mantovani, Moultaka, Looten... Their curiosity has lead them to experiment with different forms of concert performance : they give their voice to silent movies from W. F. Murnau to B. Keaton, and share their universe with such diverse personalities as the musicologist Bernard Fournier, the singer and guitarist -M-, the Canadian singer Kyrie Kristmanson, and choreographer Thomas Lebrun.
At the heart of the quartet is a strong desire to transfer their experience, be it teaching younger quartets or encouraging amateur players on music courses.
Since its creation the Quatuor Voce has benefited from the support of numerous organisations, most notably ProQuartet CEMC, the Théâtre de la Cité Internationale, the Fondation Banque Populaire, the Académie Musicale de Villecroze, the Instituto Albéniz in Madrid, and the Fondation Charles Oulmont.
Sarah Dayan plays on a violin by Stefano Scarampella (1888), Cécile Roubin a violin by Francis Kuttner (2010), Guillaume Becker a viola by Aymeric Guillard (2005) and Lydia Shelley a cello by Bernard Simon Fendt (1830).
Lise Berthaud
is unanimously praised as an outstanding rising figure on the music scene. She is a guest of various prestigious concert venues and festivals throughout Europe (Wigmore Hall, Théâtre du Châtelet, Théâtre des Champs-Elysées, Salle Pleyel, Festival de Montpellier-Radio France, Festival Berlioz de la Côte Saint-André, Festival de la Roque d’Anthéron, Davos Festival, Cheltenham Festival, Cork Festival, Moritzburg Festival, Louisiana Museum in Denmark, Sunmore Festival, Korsholm festival, Palazzetto Bru Zane in Venice) with such artists as Renaud Capuçon, Eric Le Sage, Augustin Dumay, Pierre-Laurent Aimard, Emmanuel Pahud, Gordan Nikollich, Martin Helmchen, Marie-Elisabeth Hecker, Alina Ibragimova, Veronika Eberle, Christian Poltera, David Kadouch, Daishin Kashimoto, Quatuor Ebène, the Modigliani Quartet.
In September 2013, she was selected to be part of BBC Radio 3’s New Generation Artists Scheme and is invited to perform with the BBC Symphony Orchestra, the BBC Philharmonic, the BBC National Orchestra of Wales. She performs recitals at the Wigmore Hall, Kammermusikfest Lockenhaus, Auvers-sur-Oise, Renaud Capuçon’s Festival de Pâques in Aix-en-Provence and makes her debut at the BBC Proms in September 2014 with BBC Symphony and Andrew Litton at the Royal Albert Hall.
In October 2013, Leonard Slatkin invited Lise to play and record Berlioz’ Harold in Italy with the Orchestre National de Lyon as part of the orchestra’s Berlioz cycle for Naxos.
That same month, her first CD as a soloist with pianist Adam Laloum was released and awarded several prizes including the most sought after Diapason d’Or.
As a soloist, Lise has also been a guest of the Orchestre National de Belgique, the Düsseldorfer Symphoniker, the Iceland Symphony Orchestra, the Hong Kong Sinfonietta, les Musiciens du Louvre, the Wroclaw Philharmonic Orchestra, the Sao Paulo Philharmonic Orchestra, the Ensemble Orchestral de Paris, the Orchestre de Chambre de Wallonie, and various major orchestras in France, with conductors like Emmanuel Krivine, Sakari Oramo, Fabien Gabel, Paul Mc Creesh, Marc Minkowski. In 2010 she was invited to play Harold en Italie with Marc Minkowski and Les Musiciens du Louvre for the opening night of the prestigious Berlioz Festival at La Côte Saint-André in France. In 2011 and 2012 she took part in Eric Le Sage’s recording of Schumann’s and Fauré’s complete works getting rave reviews and varied prizes including Choc de l’Année by Classica Magazine (Paris) and a Jahrespreis der deutschen Schallplattenkritik in Germany). …
Lise has worked with several major contemporary composers, including Philippe Hersant, Thierry Escaich, Henri Dutilleux, Gyorgy Kurtag, Guillaume Connesson.
Lise Berthaud was born in 1982 and started studying the violin at the age of 5 before shifting to viola. She studied with Pierre-Henry Xuereb and Gérard Caussé at the Conservatoire National Supérieur de Paris and was a prize winner of the European Young Instrumentalists Competition in 2000. In 2005, she won the Hindemith Prize at the Geneva International Competition. She was short listed by the Victoires de la Musique Classique 2009 as “Révélation de l’Année” (Revelation of the Year).