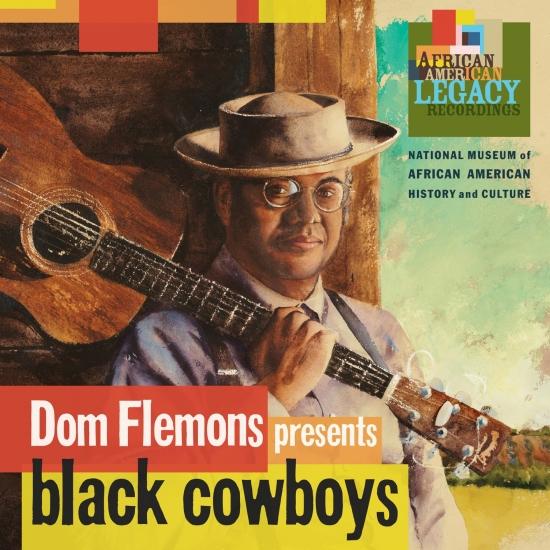 Dom Flemons presents Black Cowboys pays tribute to the music, culture, and the complex history of the golden era of the Wild West. In this single volume of music, the first of its kind, Flemons explores and re-analyzes this important part of our American identity. The songs and poems featured on the album take the listener on an illuminating journey from the trails to the rails of the Old West. This century-old story follows the footsteps of the thousands of African American pioneers who helped build the United States of America.
"You have people coming from slavery and emancipation and then, through their hard work and perseverance, in spite of the obstacles they had, they were able to create a new social order that still influences us to this day," Flemons explains.
The cowboy is one of the premier icons of American cultural identity. Yet the lack of substantial images of black cowboys has limited the public’s perception of these incredible pioneers of the Old West. The acknowledgment of black cowboys through the songs and poems featured on this album helps to create a more diverse picture of the American West after the Civil War. As professor and author Mike Searles stated in a 2010 NPR interview, “Many people see the West as the birthplace of America. If they only see it as the birthplace of white America, it means basically that all other people are interlopers—they’re not part of what makes an American. But if they understand that African Americans were cowboys, even Native Americans were cowboys, Mexicans were cowboys, it really opens the door for us to think about America as a multiethnic, multiracial place. Not just in the last decade or century, but from the very beginning.” ...
Dom Flemons, guitar, banjo, resonator guitar, vocals, pan-pipes
Alvin “Youngblood” Hart, guitar, 12-string guitar, backing vocals
Brian Farrow, fiddle, bass, backing vocals
Dan Sheehy, guitarrón
Dante Pope, backing vocals, bones
Jimbo Mathus, guitar
Stu Cole, snare drum
Produced by Dom Flemons and Dan Sheehy 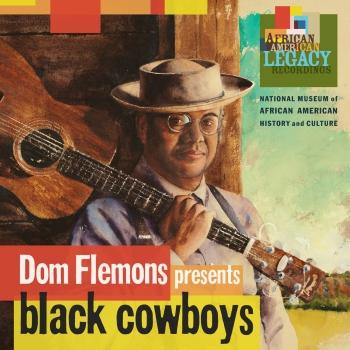 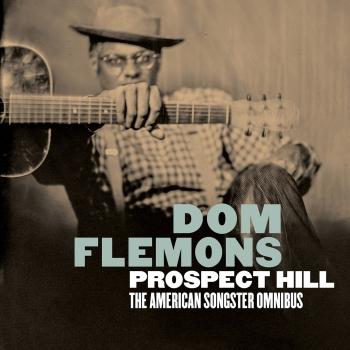 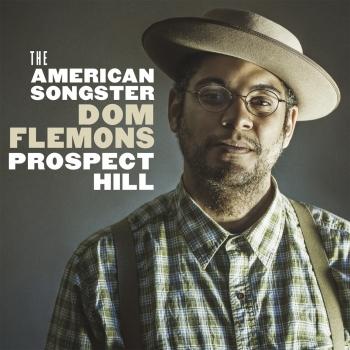 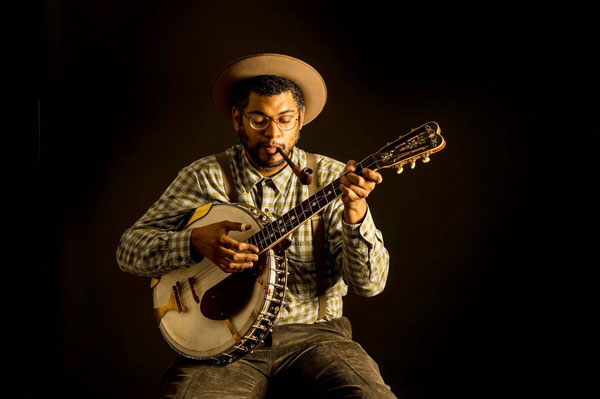 Dom Flemons
is the "American Songster," pulling from traditions of old-time folk music to create new sounds. Having performed music professionally since 2005, he has played live for over one million people just within the past three years. As part of the Carolina Chocolate Drops, which he co-founded with Rhiannon Giddens and Justin Robinson, he has played at a variety of festivals spanning from the Newport Folk Festival to Bonnaroo, in addition to renowned venues such as the Grand Ole Opry.
Raised in Phoenix, Arizona, Dom’s involvement with music began by playing percussion in his high school band. After picking up the guitar and harmonica as a teenager, he began to play in local coffee houses and became a regular performer on the Arizona folk music scene. Dom wrote his own songs and produced 25 albums of singer-songwriters and slam poets in the Phoenix area, including six albums of his own, during this time. He took a brief break from playing music in order to pursue slam poetry (he majored in English at Northern Arizona University) and performed in two national poetry slams in 2002 and 2003. Aside from exploring slam poetry, he spent his early adulthood listening to records and discovering a love of folk music, blues, jazz, jug band music, country music and ‘50s rock ‘n’ roll. Dom became interested in folk musicians such as Phil Ochs, Dave Van Ronk and Mike Seeger, as well as musicians such as Mississippi John Hurt, Howlin’ Wolf, Hank Williams, Chuck Berry and Carl Perkins. After stepping away from the slam poetry scene, he rekindled his interest in music, this time focusing on the old-time blues music of the pre-WWII era.
A multi-instrumentalist, Dom plays banjo, guitar, harmonica, fife, bones, bass drum, snare drum and quills, in addition to singing. He says that he incorporates his background in percussion to his banjo playing. Dom’s banjo repertoire includes not only clawhammer but also tenor and three-finger styles of playing. He first picked up the instrument when he borrowed a five-string banjo from a friend who had removed the instrument’s fifth string. As a founding member of the Carolina Chocolate Drops, an African-American string band, Dom was able to explore his interest in bringing traditional music to new audiences. The band won a GRAMMY for its 2011 album Genuine Negro Jig and was nominated for its most recent album, Leaving Eden, in 2012.
Dom says he would like to use the traditional forms of music he has heard and immersed himself in over the years to create new soundscapes that generate interest in old-time folk music. Focusing very much on creating music that is rooted in history but taking a contemporary approach, Dom hopes to reexamine what traditional music can become.
In July 2014, Dom released his third solo record with Music Maker Relief Foundation, and his first since leaving the Carolina Chocolate Drops. Prospect Hill finds Flemons digging deeply into ragtime, Piedmont blues, spirituals, southern folk music, string band music, jug band music, fife and drum music, and ballads idioms with showmanship and humor, reinterpreting the music to suit 21st century audiences. He was featured on NPR's Fresh Air with Terry Gross and his new album has received praise from The Boston Globe, Paste Magazine, Living Blues Magazine, and more.