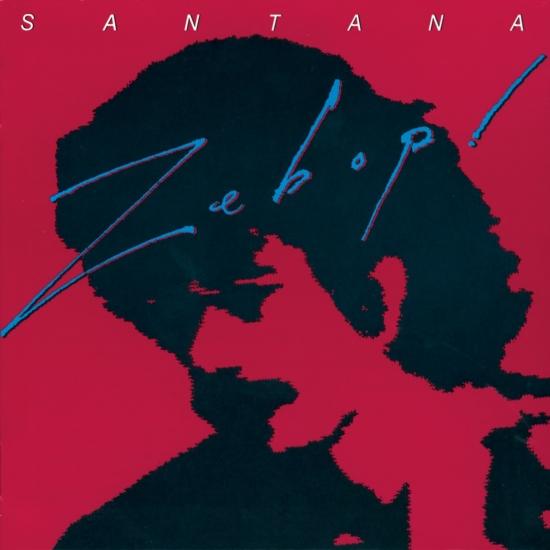 Longtime friend and promoter Bill Graham joins Devadip Carlos in the production of 1981's zestily-titled opus, Zebop!. The material makes an even navigation between radio pop and Santana's signature brand of edgy Latin rock. While Carlos' playing reaches a keen clarity throughout, nothing lets the fire loose quite like the album's instrumental numbers. Found on the previous albums Marathon and The Swing Of Delight, sessionman Alex Ligertwood is again the vocalist of the hour, turning in a strong and soulful performance.
Santana is always associated with drawing inspiration from many corners, and Zebop! is surely no exception to that tradition. The band turns Cat Stevens' 'Changes' into a salubrious piece of radio-friendly folk-pop. The brief instrumental 'Primera Invasion' certainly has the feel of a mounting attack, with piercing stacks of Carlos' overdubbed guitar riffs that quickly segue into the rolling synth-pop of 'Searchin'.' The upbeat hand-clap rock of 'Winning' makes it the shiniest outing on Zebop!, with a hearty, harmonized vocal delivery by Ligertwood as he proclaims, 'I'm winningàand I don't intend on losing again.' Based on a Yiddish melody taught to him by Bill Graham, Carlos makes mincemeat of 'I Love You Much Too Much' with his bone-chilling guitar wails.
„After teaming up with Herbie Hancock for the jazz-flavored The Swing of Delight album, Carlos Santana reentered the pop/rock realm with the rest of his band for 1981's Zebop!. He still managed to include a little bit of his famed Latino sound into a few of the tracks ('E Papa Re,' 'American Gypsy'), albeit only slightly, but Zebop!'s overall feel is that of commercial rock, with the guitar arriving at the forefront through most of the cuts. Santana does a marvelous job at covering Russ Ballard's 'Winning,' taking it to number 17 on the charts, while 'The Sensitive Kind' is built around the same type of radio-friendly structure yet it stalled at number 56. Zebop!'s formula is simple, and all of the songs carry an appeal that is aimed at a wider and more marketable audience base, with 'Changes,' 'Searchin,' and 'I Love You Much Too Much' coming through as efficient yet not overly extravagant rock & roll efforts. The album's adjustable rhythms and accommodating structures kept the band alive as the decade rolled over, peaking at number 33 in the U.K. but cracking the Top Ten in the United States, which eventually led to Zebop! going gold. Actually, 'Winning' followed in the same footsteps as Santana's last couple of Top 40 singles in 'You Know That I Love You' from 1980 and 'Stormy' from 1979. Shango, the album that came after Zebop!, gave them another hit with 'Hold On,' sung by bandmember Alex Ligertwood.“ (Mike DeGagne, AMG)
Carlos Santana, guitar, percussion, vocals, background vocals
Alex Ligertwood, vocals, background vocals
Chris Solberg, guitar, keyboards, vocals, background vocals
Alan Pasqua, keyboards, vocals, background vocals
Richard Baker, keyboards, organ, piano, synthesizer
David Margen, bass
Graham Lear, drums
Armando Peraza, bongos, percussion, vocals
Raul Rekow, congas, percussion, background vocals
Orestes Vilató, percussion, timbales, background vocals
Recorded at the Automatt, San Francisco, California
Engineered by Keith Olsen, Fred Catero
Produced by Carlos Santana, Bill Graham
Digitally remastered