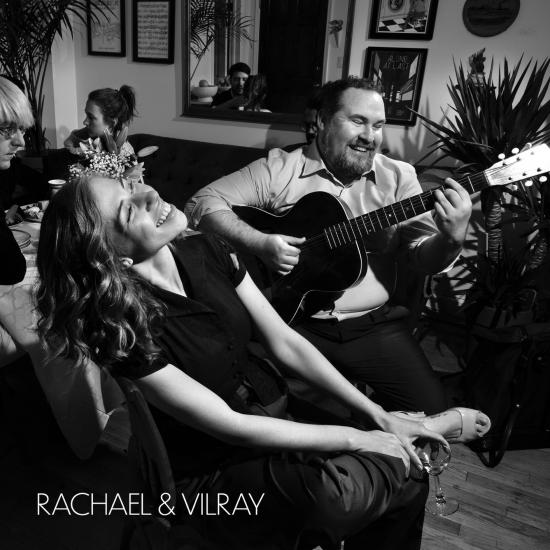 With simple arrangements and only a guitar for accompaniment, this duo performs original works, and revives forgotten gems of radio's golden age.
Rachael & Vilray—the debut album by Lake Street Dive singer-songwriter Rachael Price and composer, singer, and guitarist Vilray—features ten original songs by Vilray, plus two covers from the era that inspired him: Cuban composer Pedro Junco Jr.'s 1943 "Nosotros" and Drake/Atler's "I Love the Way You're Breaking My Heart," first popularized by Peggy Lee. "The voices of acoustic duo Rachael & Vilray are magical enough on their own," says Chronogram, "but when they blend in song the results are utterly sublime."
"It's a special kind of magic when two voices meet and immediately sound like they've never been apart," says Chronogram. "The voices of acoustic duo Rachael & Vilray are magical enough on their own, but when they blend in song the results are utterly sublime."
Price and Vilray, who began performing together in 2015, recorded the album with Lake Street Dive pianist Akie Bermiss, a rhythm section, and a small complement of horns, plus a guest performance from pianist Jon Batiste on "Go On Shining." Dan Knobler, who had worked with Lake Street Dive on the Free Yourself Up album, produced.
The duo first met in 2003 as students at the New England Conservatory of Music. Vilray formed a couple of bands with Price's soon-to-be bandmates in Lake Street Dive, Mike Calabrese and Mike "McDuck" Olson. Even then, Price recalls, he had a nimble mind and quick wit when it came to lyrics: "They would do random clicks on Wikipedia and when they found something interesting, they would write a song about it—say, the cold-blooded rat of Somalia. Vilray was able to take any subject and write excellent poetry about it, funny rhymes, and he would sing the songs. I thought he was so good—he could just apply himself to anything."
But at school, says Price, "I didn't know that Vilray and I shared a love of this particular time period of jazz. It was all I liked to listen to before I got there and everyone at school was listening to more avant garde, free stuff that I had yet to be exposed to. So I hid my love of traditional jazz music. I didn't know then that he played it perfectly."
It was more than a decade later that Price and Vilray began to collaborate. She had been on the road much of each year with Lake Street Dive and he had been developing his own solo act, just voice and guitar. Though Vilray had kept up with his composing after graduating from the conservatory, he had fallen out of performing and playing his guitar. But when he broke a finger at his day job he realized what had been lacking in his creative life: "That slapped me awake and made me realize I only had so long on planet Earth with ten fingers. A friend ran into me on the street when I was in the cast and said to me, 'You seem really bummed.' I talked to him a little bit about not playing guitar. He said, 'I'm going to book you for a show a month or two after you are out of the cast so start thinking about the music now. Once you are out of the cast, you can reclaim that part of your life.' So I played a couple of shows at this series he was running at Bar Below Rye in Williamsburg, and Rachael came to one of them."
Price remembers that night vividly: "It was a very moving show. There was dead silence while Vilray was playing. It really tugged at my heart because I missed singing this style of music. I had never really even performed it, even though I was a jazz singer. My repertoire was from a bit later. But I was obsessed with the big band singers of the thirties and forties. I asked Vilray if he would let me do that gig with him, and then he gave me one of his songs to learn. No one knew it wasn't a standard. That got the ball rolling for him on the writing. He started sending me songs constantly. We quickly went from peppering in his songs with obscure ones from the thirties and forties to all Vilray songs."
Rachael Price, vocals
Vilray, guitar 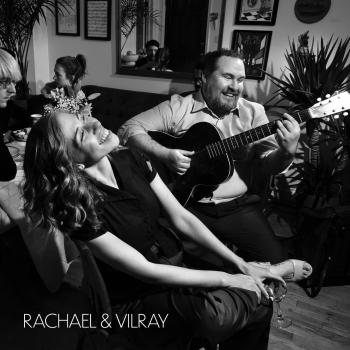 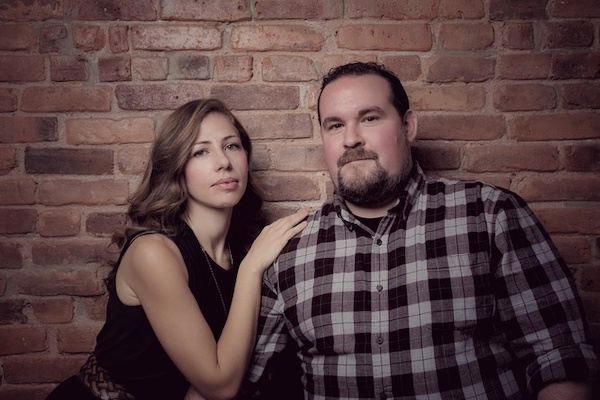 Rachael Price & Vilray
met at the New England Conservatory of Music in the Fall of 2003 and became fast friends. Their duo grew from a shared reverence for the pop music of the 1930s and 40s and its wide range of emotions. With simple arrangements and only a guitar for accompaniment, they perform original works, and revive forgotten gems of the great jazz big bands and western swing small ensembles. Their sound recalls both the warmth of radio's golden age and the intimacy of parlor concerts in a time before recordings.