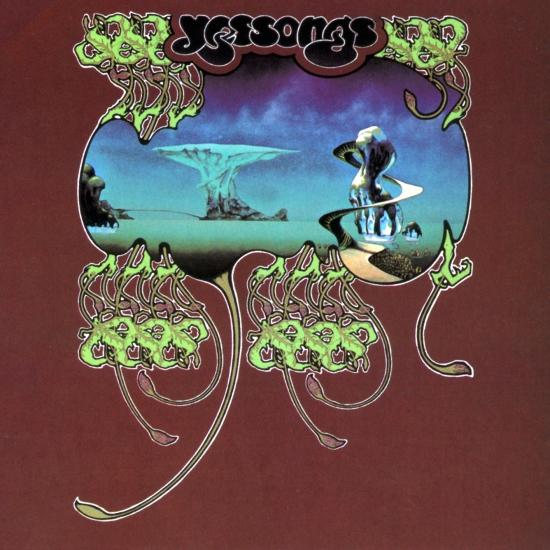 In 1972, Yes's brand of classically influenced, larger-than-life progressive rock had not yet been supplanted by the vitriol of punk, and concert-going kids would still greet 20-minute songs performed in their entirety with shrieks of delight and up-raised lighters. „Yessongs“ captures the group at the height of both its musical power and popularity. Perhaps surprisingly for such a progressive band, Yes uses the live setting to its advantage, finding musical space to explore even within its complicated arrangements. In some cases, these versions make the album versions sound a bit subdued.
Especially compelling is "And You and I" from „Close To The Edge“, and a smoking rendition of "Roundabout", which one imagines the band wasn't totally sick of playing yet. „Yessongs“ serves as a compelling showcase for the guitar heroics of Steve Howe, from his intimate solo-acoustic "Mood for a Day" to his scintillating solo on "Yours is No Disgrace," which seems to float in the air and uncoil like a snake. The playing of the rest of the group is equally impressive, particularly the classically inclined keyboard excursions of Rick Wakeman. „Yessongs“ contains many of the band's finest compositions, and is one of the definitive live documents of the progressive rock genre.
„In many ways, the extravagance of this package equates the profligacy of the prog rock combo themselves. After all, how else but on a triple-LP collection could one hope to re-create (and/or contain) an adequate sampling of Yes' live presentation? Especially since their tunes typically clocked in in excess of ten minutes. Although they had turned in five studio long-players, the vast majority of Yessongs (1973) is drawn from their three most recent endeavors The Yes Album (1970), Fragile (1971), and Close to the Edge (1972). There are two exceptions, the first being the "Opening (Excerpt from "Firebird Suite")" -- which comes from the 1969 Boston Symphony Orchestra's recording, conducted by Seiji Ozawa. The other is Rick Wakeman's keyboard solo "Excerpts from 'The Six Wives Of Henry VIII'." Yes had just undergone a personnel change shortly after concluding work on Close to the Edge as Bill Bruford (percussion) left to join King Crimson in July of 1972. Bruford can be heard on "Perpetual Change," as well as the medley of "Long Distance Runaround" and "The Fish (Schindleria Praematurus)." Enthusiasts keen on various and arguably irrelevant minutia should note the spelling of "praimaturus" as credited on Yessongs. It is slightly different from Fragile, which is denoted as "praematurus." That bit of trivia aside, the new lineup finds Alan White (drums), quite ably filling Bruford's shoes, alongside Jon Anderson (vocals), Steve Howe (guitars), Chris Squire (bass/vocals), and Rick Wakeman (keyboards).
One of their trademarks has always been an ability to re-create their often densely layered sound in concert. They effortlessly pull off the tricky chord progressions and changes in time signatures of "Siberian Khatru" and a sublime "Heart of the Sunrise," which unquestionably bests the dexterity of its carefully crafted studio counterpart. Both Howe and Squire's respective solos during "The Fish (Schindleria Praematurus)" are highlights as they give the entire unit an opportunity to show off their capacity for dramatic dynamics. The remainder of Yessongs is similarly strong, particularly the note-perfect "Close to the Edge," and the inspired concluding instrumental jam during "Starship Trooper." However, one criticism that can be leveled at the entire Yessongs release is the less than optimal audio quality throughout. The sound is generally muddy with no real fidelity to speak of and an even less precise stereoscape. But until someone goes back to the multi-tracks and remixes them for 21st century ears, this is as good as it gets when documenting Yes during this seminal transition period.“ (Lindsay Planer, AMG)
Jon Anderson, vocals
Chris Squire, bass, backing vocals
Steve Howe, electric and acoustic guitars, backing vocals
Rick Wakeman, keyboards
Bill Bruford, drums on "Perpetual Change" and "Long Distance Runaround"/"The Fish (Schindleria Praematurus)"
Alan White, drums (all other tracks)
Recorded in February, November & December 1972
Engineered by Geoffrey Haslam
Produced by Yes, Eddie Offord
Digitally remastered