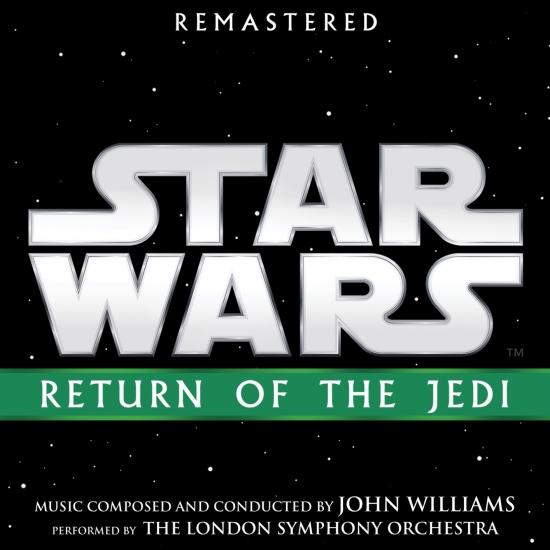 40th Anniversary-Edition: Walt Disney Records releases for the first time a 192kHz, 24bit edition of the remastered original motion picture soundtrack for Star Wars: "Return of the Jedi".
The "Return of the Jedi" score was recorded at the Abbey Road studios in January and February 1983 by the London Symphony Orchestra. The score won another Oscar nomination for John Williams. Because of the decrease of popularity for the vinyl format, Return of the Jedi, which has the longest score of the original trilogy, was only released on one LP instead of two like the scores for its predecessors, A New Hope and The Empire Strikes Back.
"The original intent behind the release of the three Special Edition soundtracks was to place all of the available Star Wars music on the market and in the hands of fans. Though this collection includes new music from the Special Edition of the film -- previously unreleased music, a concert suite, and an alternate version of the music for the assault on Jabba the Hutt's sail barge -- it unfortunately doesn't include the original Sy Snootles track or the original Ewok celebration track. The music for Return of the Jedi is presented chronologically, with source music and alternate cues tucked away at the end of each disc, making those particular cuts easier to ignore (highly recommended in the case of the overbearing "Jedi Rocks," a new song composed for the Special Edition). Alas, ignoring John Williams' insipid, Yanni-like new addition to the score, "Victory Celebration," is only possible if you also manage to ignore the end title music. While the original celebration music, with its chorus line of demented Ewok voices, was no great joy, at least it had some interesting musical qualities. Despite its uninformative sleeve notes, this collection has a lot going for it. Musically, it sounds gorgeous; Williams turned in a score incorporating layer upon layer of thematic elements, risking a tendency toward composing music that was too ornate. Frills and trills abound, but Williams avoided allowing the score to be buried in them. Having the music assembled as a continuous master provides the listener with a more organic flow and a better listening experience overall, while the remixing and remastering have improved the sound and dynamic range enormously. Despite the missing music, this is definitely the version to have." (Steven McDonald, AMG)
Digitally remastered