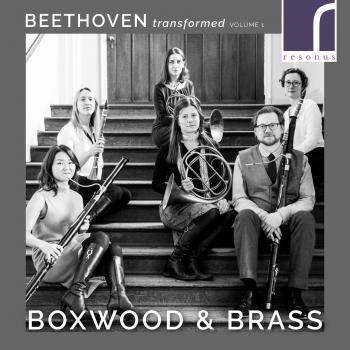 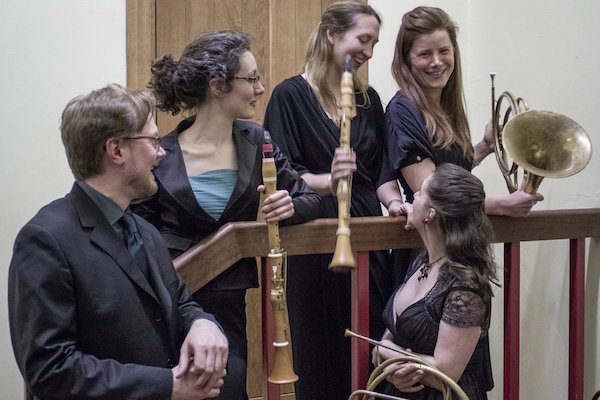 Boxwood & Brass
Founded in 2013, Boxwood & Brass brings together leading period-instrument specialists in an ensemble dedicated to the performance of harmoniemusik, the wind ensemble music of the late-eighteenth and early-nineteenth centuries. The group’s repertoire ranges from the military band music of England, through the virtuosic chamber music of the Parisian salon, to the vast libraries of music created for the harmonie ensembles of the central- European nobility, as well as new arrangements by bassoonist Robert Percival.
The musicians of Boxwood & Brass combine instrumental and scholarly virtuosity and are committed to placing music unheard since the eighteenth century in an illuminating historical and cultural context that furthers understanding of the historical activity of harmoniemusik.
Emily Worthington
specialises in playing period clarinets from the eighteenth to early-twentieth century. She has performed with orchestras across the UK and Europe, including The Gabrieli Players, Spira Mirabilis, Le Cercle de l’Harmonie, the Orchestra of the Age of Enlightenment, Academy of Ancient Music, and Le Concert Spirituel. Emily’s musicological research, which concentrates on late-eighteenth to early-twentieth-century performance practice, was supported by an AHRC Doctoral Award and an Edison Research Fellowship. Emily is Lecturer in Music Performance at the University of Huddersfield and a member of the HuCPeR, the Huddersfield Centre for Performance Research.
Fiona Mitchell
completed her Masters in 2010 at the Royal Academy of Music having already completed her undergraduate studies at the Royal College of Music. She now pursues a busy professional career, performing in orchestras, playing in chamber groups and teaching. A member of Sir John Eliot Gardiner’s orchestras the English Baroque Soloists and Orchestre Révolutionnaire et Romantique since 2009, Fiona has performed in world- famous venues including Carnegie Hall, Amsterdam Concertgebouw and at the BBC Proms in the Royal Albert Hall. Fiona also performs with other period orchestras in the UK and abroad including the Orchestra of the Age of Enlightenment, Academy of Ancient Music and Pygmalion Orchestre, and as a modern clarinetist plays regularly with Birmingham Royal Ballet, London Concert Orchestra and BBC Concert Orchestra. As a chamber musician she has played at festivals such as Harrogate, Cheltenham, Cambridge Arts and further afield at such venues as Saintes, France and the Utrecht Festival in Holland.
Anneke Scott
is principal horn of many ensembles including Sir John Eliot Gardiner’s Orchestre Révolutionnaire et Romantique and The English Baroque Soloists, The Orchestra of the Sixteen, Europa Galante, The Avison Ensemble, Irish Baroque Orchestra, Dunedin Consort and The Kings Consort. Anneke enjoys a highly active solo and chamber music career and has appeared internationally as a soloist in repertoire from Bach through to Britten. Her solo discography includes Voices from the Past featuring instruments from Oxford’s Bate Collection, Sonatas for Horn and Fortepiano with fortepianist Kathryn Cok and a trilogy of albums featuring the work of the virtuoso horn player Gallay. With ensembleF2 she has recorded both the solo horn sonatas and chamber music of Danzi and with Ironwood has explored repertoire surrounding Mozart’s Horn Quintet.
Kate Goldsmith
Former Principal Horn of the Cyprus Chamber Orchestra, Kate Goldsmith has played period horns with The Kings Consort, Il Complesso Barocco and Haydn Sinfonietta Wien. As a chamber musician, she has performed with Spira Mirabilis and been a Chamber Fellow of the Royal Academy of Music. She occasionally plays with the Royal Philharmonic and BBC Concert Orchestras, the London Mozart Players and English Touring Opera. Other notable performances include the première of Stockhausen's Opera ‘Sonntag aus Licht’ with musikFabrik in Cologne, performance art in Trafalgar Square and a live televised gig with rap/hip-hop artist Kanye West.
Robert Percival
Following studies on modern instruments at the Birmingham Conservatoire and at the Royal Northern College of Music, Robert Percival began playing historic bassoons and contrabassoons in 2001, and now performs repertoire ranging from Bach to Brahms and Mahler with many leading early instrument groups, including the Orchestra of the Age of Enlightenment in London and the Orchestre des Champs-Élysées in France. Away from playing Robert is busy as a freelance music copyist and editor of eighteenth and nineteenth century wind music, which also forms the basis of his on-going doctoral research.