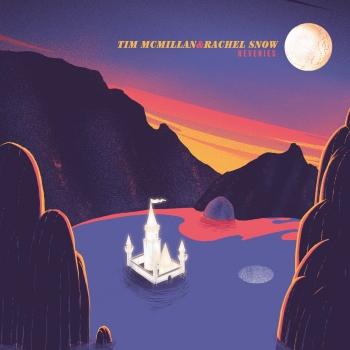 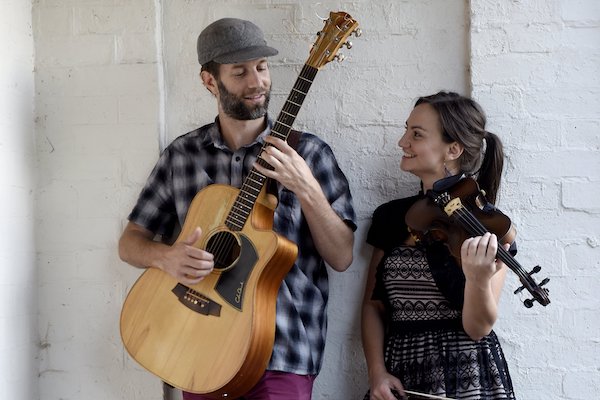 Tim McMillan & Rachel Snow
are a duo from Melbourne, Australia, based in Germany and currently immersed in an endless tour entertaining and delighting audiences across the world. Tim is a percussive fingerstyle guitarist and outlandish storyteller and Rachel an exceptional violinist and accomplice in Tim's whimsical narrative.
With over 120 concerts delivered every year across Europe, Japan and Australia, the duo's thirst for exploration and inspiration is growing. Their lust for travel seeps into the soundscapes of their live shows with some imagining the music as a moving soundtrack. Along with emotive moments the audience is captivated by athletic guitar stunts, interwoven violin antics and a magical blend of vocals. Tim's psychedelic and sometimes true stories of life on the road and tales from the Australian bush become increasingly eccentric and outrageous as the show unfolds. The audience leaves feeling that they have themselves been on a wonderful and colourful adventure. Tim and Rachel are versatile and perform an inventive mix of styles including Celtic rock, folk, metal & jazz. They accept the challenge of any stage and can be found performing at festivals, clubs, theatres and living rooms. They have opened up for fusion guitar legend Al Di Meola at the Dachauer Sommerfest in Germany and have also supported hard rock band Ugly Kid Joe on European and Australian tours in 2016/2017. They were main support for Motorhead's Phil Campbell tour in Germany in November 2018.
"Their instruments and voices blended perfectly... as well as being extremely talented musicians, the duo were quite the storytellers and had the punters in stitches with their wild tales and musical mash-ups" - Silver Tiger Media, Australia
"Tim displays a virtuosic tapping technique with percussive guitar alongside Rachel who merges classical violin with a Celtic flavour. The duo blend together folk, Latin, jazz and rock elements to create a bright and fun performance" - Acoustic Guitar World, Japan
"Brilliant and haunting" - Frankfurter Allgemeine, Germany
REVERIES: After many years performing and touring together, Tim and Rachel recently made their way into the studio to capture their entrancing style. In five days working with Arno Jordan of Castle Studios at Schloss Rohrsdorf, outside Dresden, their first fully collaborative work 'Reveries' came to life. The album features songs with beautifully fused vocal harmonies floating amidst a vibrant array of sound. Instrumental pieces reveal intricate and expressive guitar techniques embraced by stirring violin melodies that sing with a hint of Celtic lilt. 'Reveries' represents the beginning of a new and exciting partnership of music and songwriting for Tim and Rachel. 'Reveries' will be released in March 2020.
HIRAETH: Along with a brief appearance on Tim's first album 'Afterparty', Rachel also features on Tim's fifth album 'Hiraeth', which is a collection of instrumental pieces and songs composed and recorded while on tour throughout Europe. Hiraeth (Welsh) is a feeling of homesickness for a place or time to which you cannot return, or which maybe never was. The compositions on the album reflect on endless travel and distance from home, changing landscapes, changing feelings and acknowledgment that nothing ever remains the same. The future is full of endless opportunities and hazards.
The music is shaped by Tim's distinctive guitar and the first song 'Ecdysis' (meaning: the process of shedding the old skin) is immediately a trip to folklore with the introduction of Rachel's captivating melodies. Graceful and complex interplay between guitar and violin remains throughout the album. The blend of Tim and Rachel's vocals is placed somewhere in the sixties, with harmonies reminiscent of songs of the Byrds, especially the element by David Crosby.
Peaceful moments are found in songs like 'Owl Dance' and a wilder mood emerges in 'Zaxo' which features a variety of guest musicians from the rock world including members of Motörhead, The Sisters of Mercy, Ugly Kid Joe, Ghost and Mr Bungle.