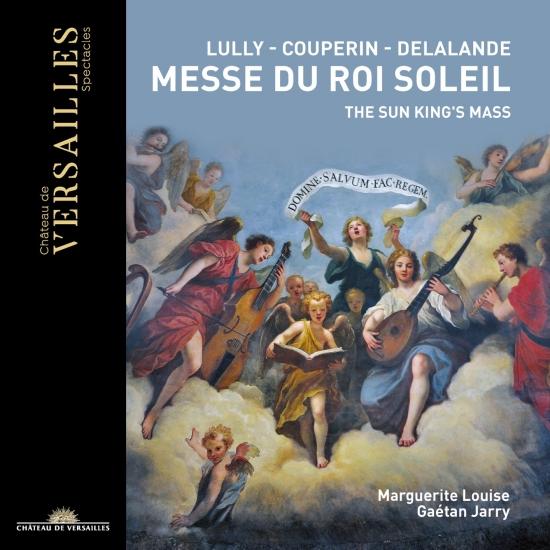 The Sun King’s Mass was without doubt one of the privileged rites for the standing glory of the sovereign, as much because of its splendour, as for its ceremonial aspect, which brings time to a halt, solidifying the eternal image of royal power. The greatest composers of the kingdom distinguished themselves by making the holy service a veritable heavenly concert. The bell rang, the fifes and drums announced the arrival of the king in the gallery, the organ burst forth, the Grands Motets by Lully and Delalande enthralled under the golden vaults, the delicate and intimate petits motets by Couperin appear with grace in the alcoves of the Royal Chapel…
"One expects better of Versailles. Although the performances are quite decent, the programme is rather a rag-bag and very short and the booklet (Eng/Fre) poorly designed. Why not all the French essays together, then all the English, rather than interleaving them? And the notes, once found, aren’t that great either – whether in French or English. A case of trying too hard, rather than incompetence, but either way the reader loses out.
The Sun King heard various types of mass in his chapel, most famously the ‘solemn low mass’ which consisted of a grand motet, a petit motet and a Domine salvum fac regem, all sung while the priest quietly spoke the liturgy. On other occasions, he heard organ music and chant and here we get a bit of everything, sometimes a very short bit. So the overall effect is rather unsatisfying even though the major works – psalm settings by Delalande and Lully – are splendid pieces, worthily sung. Indeed, the soprano solos and duets are some of the best I’ve heard for a long time. Nonetheless, the overall verdict has to be ‘could do better’." (David Hansell, earlymusicreview.com)
Choeur Marguerite Louise
Gaetan Jarry, direction