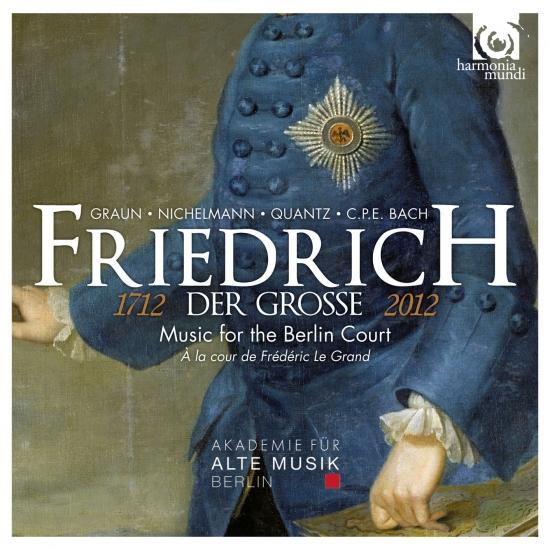 The year 2012 marks the tercentenary of the birth of Frederick the Great, whose political and military glory has often relegated his musical talent to the status of a mere hobby. But Frederick II was not only the key personality of Berlin musical life for the whole of the 18th century – as is shown by the works of the composers presented on this CD, all of whom worked at his court at some point in their careers – but also an excellent flautist who left posterity a number of fine flute sonatas from his own pen.
The Akademie für Alte Musik Berlin celebrates its 30th anniversary in 2012. Formed in East Berlin in 1982, Akamus can pride itself on an outstanding reputation and an exceptional career: it has been a welcome guest in all thegreat musical institutions of Europe, Asia and North and South America. In 2011, the ensemble took in its stride operatic productions in nine European countries, an extended tour of the USA and its first tour to China.
The group gives around one hundred concerts a year, with varied forces, under the direction of its different Konzertmeisters: Midori Seiler, Stephan Mai, Bernhard Forck, Georg Kallweit; or guest conductors such as Marcus Creed, Daniel Reuss and Hans-Christoph Rademann. The Akademie’s collaboration with René Jacobs, which started almost 25 years ago, has turned into a genuine artistic partnership. The productions resulting from their work together have been enthusiastically acclaimed both on stage and on record: their recording of 'Die Zauberflöte' was distinguished with an Editor’s Choice in Gramophone and BBC Music Choice. More recently 'Agrippina' has been shortlisted for a BBC Music Award in April 2012.
Since 1994, the Akademie für Alte Musik Berlin has recorded exclusively for harmonia mundi.
“the Akademie für Alte Musik Berlin offers a chance to experience what his chamber concerts might have been like, in period pieces by court composers, with one of more than 100 hundred of the king's flute sonatas...C P E Bach's 'Sinfonie No 1' is the standout, performed with gusto.” (The Independent)
“There is no need to say much about the Berlin Akademie fur Alte Musik's performances; they show all the urgent intent, vibrant sound and expert ensemble playing we have come to expect from them. What better outfit could there be to celebrate Frederick's 300th anniversary year, and what better repertoire to mark their own 30 years together?” (Gramophone Magazine)
“the Akademie plays most sensitively, wind colouring unobtrusively...The best playing, of the most inspired piece, is Bach's Sinfonie...Its fire and fury is breathtaking - and superbly played. Most warmly recommended.” (BBC Music Magazine)
Die Akademie für Alte Musik Berlin

Die Akademie für Alte Musik Berlin (short vor Akamus)
Founded in Berlin in 1982 and recognized today as one of the world's leading chamber orchestras, the Akademie für Alte Musik Berlin, or Akamus, enjoys an unprecedented history of success. The ensemble, which performs regularly in Europe's leading musical centers, has toured Asia, North America, and South America.
Ever since the reopening of the Berlin Konzerthaus in 1984, the ensemble has enjoyed its own concert series in Germany’s capital, and since 1994 has been a regular guest at the Berlin Staatsoper Unter den Linden and at the Innsbruck Festival of Early Music. Starting with the 2012-13 season Akamus also has an own concert series at Munich’s Prinzregententheater. Each year Akamus gives circa 100 concerts, ranging from small chamber works to large-scale symphonic pieces, and performs under the artistic leadership of its concertmasters Midori Seiler, Stephan Mai, Bernhard Forck, and Georg Kallweit
Numerous guest conductors and soloists have worked with the Akademie für Alte Musik Berlin as well. For over 25 years the partnership with the Belgian countertenor and conductor René Jacobs has produced many celebrated opera and oratorio productions. One of the most recent of these is the release of the recording of Mozart’s opera The Magic Flute, which the BBC has hailed as “spine tingling”: “Jacobs is all about excitement and making the most of orchestral detail: the breakneck overture only manages to stay on the rails thanks to stunning playing from the Akademie für Alte Musik Berlin.”
The ensemble has also worked with the conductors Marcus Creed, Peter Dijkstra Daniel Reuss, and Hans-Christoph Rademann, who currently leads the RIAS Kammerchor, as well as with Andreas Scholl, Sandrine Piau and Bejun Mehta. Moreover, Akamus has extended its artistic boundaries to work together with the modern dance company Sasha Waltz & Guests for innovative productions of Henry Purcell’s Dido and Aeneas and Medea (music: Pascal Dusapin). And, with its visually dramatic performance of 4 Elements - 4 Seasons, a “staged concert,” Akamus has demonstrated yet again its international reputation for being a creative and innovative ensemble.
The international success of the Akademie für Alte Musik Berlin is highlighted by well over a million recordings sold to the public. Recording exclusively for harmonia mundi France since 1994, the ensemble’s CDs have earned many international prizes, including the Grammy Award, the Diapason d'Or, the Cannes Classical Award, the Gramophone Award and the Edison Award. For its DVD production of Purcell's opera Dido and Aeneas with Sasha Waltz & Guests, Akamus received the German Record Critics’ Award in 2009. For its recording of Telemann's Brockespassion, the ensemble was awarded the MIDEM Classical Award 2010 and the Choc de l’Année. In 2011 the recording of Mozarts Magic Flute was honoured with the German Record Critics' Award. The CD Friedrich der Grosse. Music from the Berlin Court has been awarded with the Diapason d’Or in 2012. The orchestras recording of Handel’s opera Agrippina has been nominated for a Grammy Award 2013 as Best Opera Recording. The world premiere recording of Pergolesi’s oratorio Septem Verba a Christo with René Jacobs is praised all around as an important rediscovery.