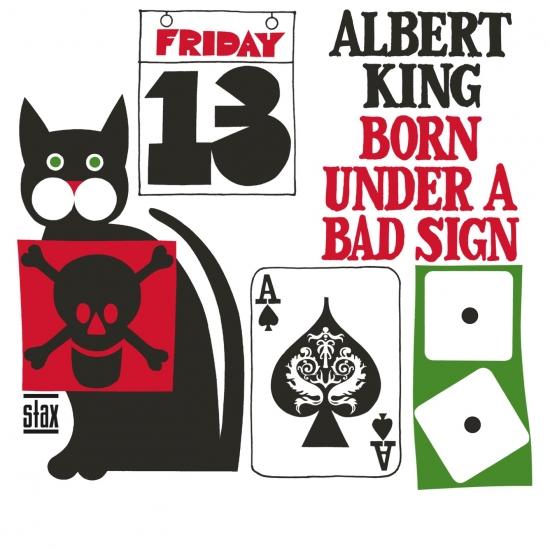 Simply one of the greatest blues choruses ever. It’s screaming: “Life don’t get much harder than this!” The funky, swinging bass line, perforated with defiant, almost haughty guitar licks, is a legendary piece of music. It’s one of those songs that people know as soon as they hear the instantly recognisable introduction – but it’s more likely to be the Cream version that they’ll have in mind. The band transformed the title track from Albert King’s Born Under A Bad Sign into a huge hit, helping the album Wheels Of Fire to the No.3 and No.1 chart positions in the UK and US, respectively, and producing the first ever Platinum-selling double-album.
Born Under A Bad Sign is Albert King’s legendary first album for Stax Records, and features Booker T. & The MGs and the Memphis Horns. The Indianola, Mississippi-born “King of the Blues Guitar,” cemented his legacy with this debut set. While he’d recorded for labels like Vee-Jay, Parrot and Bobbin, it was his chemistry with the Stax team — label executives Al Bell, Jim Stewart and Estelle Axton, songwriters Booker T. Jones and William Bell, and backing from Booker T. & the MGs and the Memphis Horns — that put King on the blues map. King’s first Stax recording was “Laundromat Blues,” included on this album. Booker T. Jones and Stax soul singer William Bell came up with the thundering bass riff that defined the title track “Born Under a Bad Sign.” The song notched #49 on the R&B chart in 1967. The album has been inducted into the Grammy Hall of Fame and included in Rolling Stone’s “500 Greatest Albums of All Time.” This ALL-ANALOG reissue has been mastered from the original mono tapes by Kevin Gray at Cohearent Audio and pressed on 180-gram vinyl at Memphis Record Pressing. The mono mix of this album has been unavailable on vinyl since the album's original 1967 release.
"Albert King recorded a lot in the early '60s, including some classic sides, but they never quite hit the mark. They never gained a large audience, nor did they really capture the ferocity of his single-string leads. Then he signed with Stax in 1966 and recorded a number of sessions with the house band, Booker T. & the MG's, and everything just clicked. The MG's gave King supple Southern support, providing an excellent contrast to his tightly wound lead guitar, allowing to him to unleash a torrent of blistering guitar runs that were profoundly influential, not just in blues, but in rock & roll (witness Eric Clapton's unabashed copping of King throughout Cream's Disraeli Gears). Initially, these sessions were just released as singles, but they were soon compiled as King's Stax debut, Born Under a Bad Sign. Certainly, the concentration of singles gives the album a consistency -- these were songs devised to get attention -- but, years later, it's astounding how strong this catalog of songs is: "Born Under a Bad Sign," "Crosscut Saw," "Oh Pretty Woman," "The Hunter," "Personal Manager," and "Laundromat Blues" form the very foundation of Albert King's musical identity and legacy. Few blues albums are this on a cut-by-cut level; the songs are exceptional and the performances are rich, from King's dynamic playing to the Southern funk of the MG's. It was immediately influential at the time and, over the years, it has only grown in stature as one of the very greatest electric blues albums of all time." (Stephen Thomas Erlewine, ANG)
Albert King, guitar, vocals
Steve Cropper, rhythm guitar
Booker T. Jones, piano
Isaac Hayes, piano
Joe Arnold, baritone & tenor saxophone, flute
Andrew Love, tenor saxophone
Wayne Jackson, trumpet
Donald "Duck" Dunn, bass
Al Jackson, Jr., drums
recorded March 1966 until June 1967 at Stax Studios in Memphis
Digitally remastered 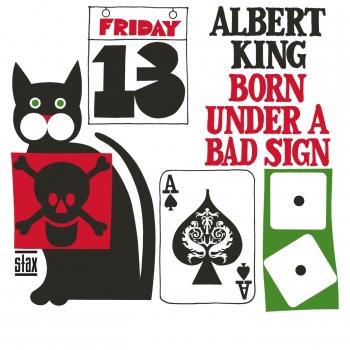 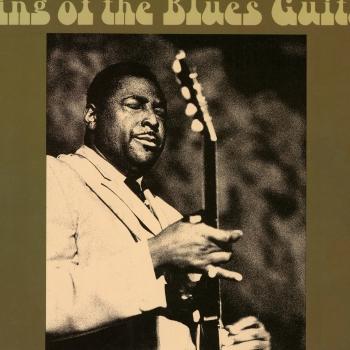 King Of The Blues Guitar 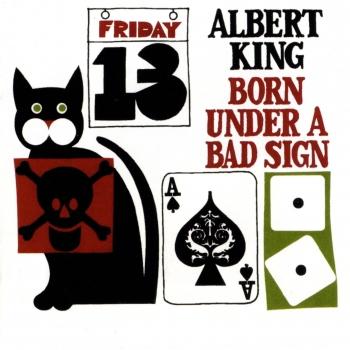 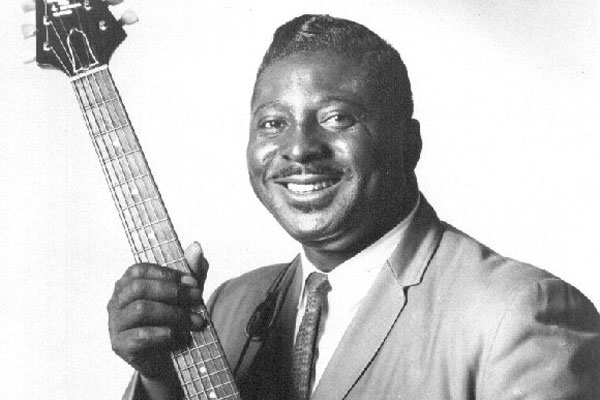 Albert King Bluesman Albert King was one of the premier electric guitar stylists of the post-World War II period. By playing left-handed and holding his guitar upside-down (with the strings set for a right-handed player), and by concentrating on tone and intensity more than flash, King fashioned over his long career, a sound that was both distinctive and highly influential. He was a master of the single-string solo and could bend strings to produce a particularly tormented blues sound that set his style apart from his contemporaries. A number of prominent artists,from Eric Clapton and Jimi Hendrix to Mike Bloomfield and Stevie Ray Vaughan, borrowed heavily from King's guitar style.
King was also the first major blues guitarist to cross over into modem soul;his mid- and late 1960s recordings for the Stax label, cut with the same great session musicians who played on the recordings of Otis Redding, Sam & Dave,Eddie Floyd, and others, appealed to his established black audience while broadening his appeal with rock fans. Along with B.B. King (no relation, though at times Albert suggested otherwise) and Muddy Waters, King helped nurture a white interest in blues when the music needed it most to survive.
King was born in Mississippi and taught himself how to play on a homemade guitar. Inspired by Blind Lemon Jefferson, King quit singing in a family gospel group and took up the blues. He worked around Osceola, Arkansas, with a group called the In the Groove Boys before migrating north and ending up in Gary,Indiana, in the early 1950s. For a while, King played drums behind bluesman Jimmy Reed. In 1953, King convinced Parrot label owner Al Benson to record him as a blues singer and guitarist. That year King cut "Bad Luck Blues" and "Be On Your Merry Way" for Parrot. Because King received little in the way of financial remuneration for the record, he left Parrot and eventually moved to St. Louis, where he recorded for the Bobbin and the King labels. In 1959 he had a minor hit on Bobbin with "I'm a Lonely Man." King's biggest release, "Don't Throw Your Love on Me So Strong," made it to number 14 on the R&B charts in 1961.
King didn't become a major blues figure until after he signed with Stax Records in 1966. Working with producer-drummer Al Jackson, Jr., guitarist Steve Cropper, keyboards ace Booker T. Jones, and bass player Donald "Duck"Dunn-aka Booker T. and the MG's, King created a blues sound that was laced with Memphis soul strains. Although the blues were dominant on songs such as"Laundromat Blues" and the classic "Born Under A Bad Sign", the tunes had Memphis soul underpinnings that gave King his crossover appeal. Not only was he the first blues artist to play the legendary San Francisco rock venue the Fillmore West, but he was also on the debut bill, sharing the stage opening night in1968 with Jimi Hendrix and John Mayall. King went on to become a regular at the Fillmore; his album Live Wire/Blues Power was recorded there in 1968.King was also one of the first bluesman to record with a symphony orchestra: in1969 he performed with the St. Louis Symphony, triumphantly bringing together the blues and classical music, if only for a fleeting moment.
During the 1970s King toured extensively, often playing to rock and soul crowds. He left Stax in 1974 to record for independent labels like Tomato and Fantasy. King was inducted into the Blues Foundation's Hall of Fame in 1983.He continued touring throughout the 1980s and early 1990s, playing festivals and concerts, often with B.B. King.
He died of a heart attack in 1992, just prior to starting a major European tour. (Source: Stax Records)