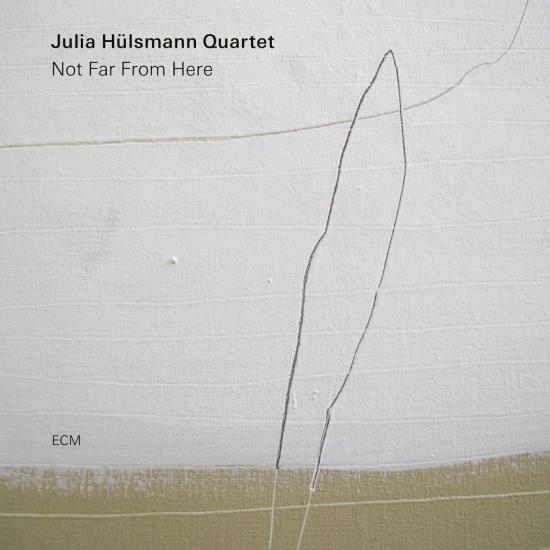 Info for Not Far From Here

Not Far From Here introduces pianist Julia Hülsmann’s new group, in which her long-established working trio with Marc Muellbauer and Heinrich Köbberling (together now for 17 years) is expanded to a quartet with the addition of saxophonist Uli Kempendorff. In Kempendorff’s playing “both suppleness and unruliness are in ample supply”, Jazzthetik has noted, and he brings a fresh energy and new perspectives to the group, while at the same time honouring the deep feeling for melody at the heart of Julia’s work. It is a development with a lengthy history. Hülsmann and Kempendorff first played together about twenty years ago – “Uli must have been around 18 at the time”, Hülsmann recalls - and have given occasional duo concerts since then. Bassist Marc Muellbauer has been a member of some of Kempendorff’s groups and played on his albums Out With It and Louise, released in 2006 and 2010. And, as musicians active on the Berlin scene, there have also been ad hoc collaborations from time to time.
“I had the growing feeling that Uli was the right player for us now,” Julia says. The four of us did a lot of rehearsing together, which was interesting in itself: the trio had never been much of a rehearsing group. We recorded and analysed the rehearsals, looked at the areas that worked best. It’s not so easy, as a player from the outside, to come into the music of this close circle of friends. But it was soon clear that Uli, by observing and listening carefully, had got the idea of the way our group functions and brought something of his own to it, in a thoughtful and sensitive way. Now, as we play concerts, there is more and more exploring, as the arrangements and material open up.”
Each member of the quartet brings in original compositions, with Julia herself contributing five pieces to the album. “Weit Weg”, “Streiflicht” and “No Game” began their life as solo piano pieces, adapted and expanded for the quartet, while title piece “Not Far From Here” was written especially for this cast of characters, adroitly integrating Kempendorff’s eloquent tenor into the Hülsmann group concept.
Drummer Heinrich Köbberling offers a pair of strikingly different pieces. The pretty “If I Had A Heart” opens almost like a Ben Webster ballad before its theme gives way to a feature for bassist Muellbauer, soloing inside the structure of the tune. “Colibri”, meanwhile, might be taken for “a characteristic drummer’s piece,” Julia suggests, “starting from the rhythmical idea, but then it goes somewhere else entirely with the swing part in the middle. We haven’t had that element on our group albums previously, though all of us have played jazz with that feeling.”
Marc Muellbauer is the author of the album’s longest pieces, “Mistral” and “Wrong Song”. “Mistral" is a very important tune for us. It’s a great example of the way in which a technical idea can evolve into something that feels very loose and open. We’ve been working on it for a long time. It was originally called ‘Thirty-Five’ because Marc is playing around with multiples of 5 and 7, but out of that rhythmic idea it developed into something where we have more freedom. We can move around inside it and it’s different every time we play it. I love that aspect.”
Uli Kempendorff’s compositional contributions are the brief “You Don’t Have To Win Me Over”, which lays out its message and departs, and the more enigmatic “Einschub”, a piece which resists swift categorization. “When he brought it to the first rehearsal, I wasn’t sure what it was. Uli has something in his writing, in his approach to harmony and melody that we – Marc, Henrich and I – don’t have. ‘Einschub’ is, I think, about the independence of the lines and of the rhythms, which become quite complex in the way they overlap toward the end.”
Julia’s musical enthusiasms have never been strictly limited to jazz sources, and previous albums have drawn on music from Kurt Weill to Kyrgyzstan folk song to pop and rock music of Seal and Radiohead. This season’s cover version is a timely interpretation of “This Is Not America”, David Bowie’s 1980s hit single (co-authored by Bowie, Pat Metheny and Lyle Mays), originally written for John Schlesinger’s spy movie The Falcon and the Snowman. Hülsmann says that her motivation for playing the song was not, at least in the first instance, political. “It’s simply one of my all-time favourite songs. We’ve tried it a number of ways, with different levels of intensity. This time it begins with us all playing softly, then Uli brings in the ‘political’ dimension with the emotion and the anger building up in his solo.” The closing solo piano variation of “This Is Not America” at the end of the album seems to shift the mood of the piece from outrage to melancholy.
Not Far From Here, recorded at Studios La Buissonne in the South of France in March 2019 is issued as the Hülsmann Quartet embarks on a European tour, with concerts in Germany, France, the UK, and Belgium. Dates include ECM50 events at the London Jazz Festival and Le Flagey, Brussels.
Uli Kempendor, tenor saxophone
Julia Hulsmann, piano
Marc Muellbauer, double bass
Heinrich Kobberling, drums

Booklet for Not Far From Here