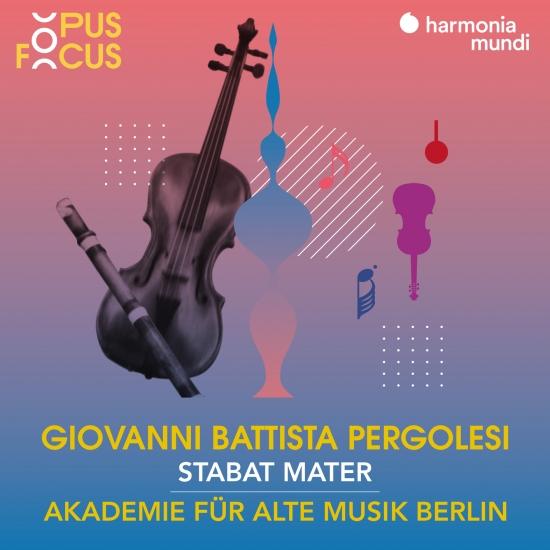 Pergolesi completed his Stabat Mater a few days before his death, on 17 March 1736, prompting comparisons with another mythical figure, Mozart composing his Requiem. It is framed here by three more masterpieces of the pianto genre in a similar spirit of bittersweet sadness. Born in Buenos Aires to Slovenian parents, Bernarda Fink studied at the Instituto Superior de Arte del Teatro Colón. Today her repertoire ranges from the Baroque to the twentieth century, and she appears regularly with such great international orchestras as the Vienna Philharmonic and Berlin Philharmonic and with celebrated Baroque ensembles. Among the conductors with whom she works are Nikolaus Harnoncourt, René Jacobs, Mariss Jansons and Riccardo Muti. Since the start of her career, Bernarda Fink has been applauded in the leading concert halls of Europe and Argentina. She was recently heard in the role of Irene (Theodora) under the direction of Ivor Bolton at the Salzburg Festival and as Idamante in Luc Bondy’s production of Idomeneo conducted by Jesús López-Cobos at the Teatro Real in Madrid; she has also recorded the latter role for harmonia mundi with René Jacobs. She gives song recitals in the principal European and American musical centres. Bernarda Fink has taken part in more than 50 recordings.
Anna Prohaska studied at the Hanns Eisler Hochschule für Musik Berlin with Norma Sharp, Brenda Mitchell and Wolfram Rieger. She has a close association with the Staatsoper Berlin where her roles have included Blonde, Oscar, Tebaldo, Poppea (Agrippina), and Anne Trulove, with such conductors as Daniel Barenboim, Philippe Jordan, Ingo Metzmacher, and René Jacobs. Her work at the Salzburg festivals includes concerts with the Berlin Philharmonic and the Cleveland Orchestra as well as Don Giovanni (Zerlina) and Luigi Nono’s Al gran sole carico d’amore. She has also appeared at the Lucerne and Aix-en-Provence Festivals and in concert with Claudio Abbado (Berlin Philharmonic and Orquesta Sinfónica Simón Bolivar), Sir Simon Rattle (Berlin Philharmonic and Vienna Philharmonic), and Pierre Boulez (Symphonieorchester des Bayerischen Rund-funks). In recital she can be heard with Eric Schneider, with whom she recorded her first solo recital album.
"While Pergolesi s Stabat mater is the main item, its sorrowful mood is anticipated in Vivaldi s instrumental sinfonia Al Santo Sepolcro and Locatelli s concerto Il pianto d Arianna, as well as in Pergolesi s own Salve regina. The Akademie establishes the poignancy of atmosphere at the start, and all the performances are stylish and emotionally in keeping." (Geoffrey Norris)
"Bernhard Forck and the orchestra balance the various emotions with skill...[the Salve Regina] is an attractive piece of no great profundity." (Gramophone Magazine)
"This latest recording is notable for Bernarda Fink’s rich, velvety singing of the alto solos, although “historically aware” fanatics may now find her plush timbre a shade too fruity for a sacred work...This is an attractive programme and Fink fans won’t be disappointed." (Sunday Times)
"Anna Prohaska's bright-to-the-point-of-glaring soprano contrasts well with Bernarda Fink's dark alto in the solos...[Forck] does remind you how forceful its confrontation with mortality is, and how much is gained when sentiment is stripped away." (The Guardian
Anna Prohaska, soprano
Bernarda Fink, mezzo-soprano
Akademie Für Alte Musik Berlin
Bernhardt Forch, conductor