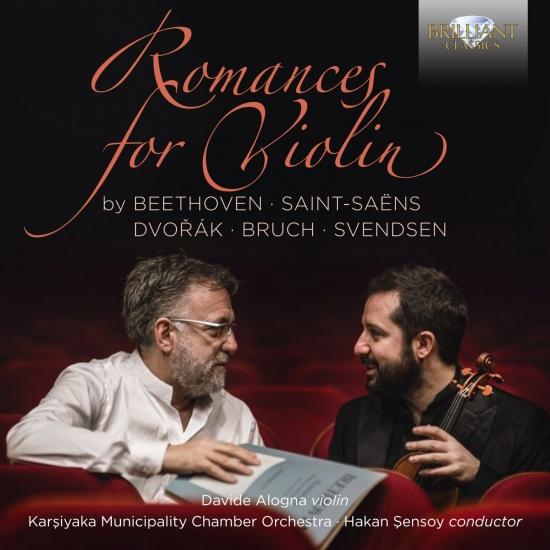 An accomplished young Italian violinist with an appealing collection of concertante romances by great composers from Beethoven to Bruch.
The romance in music is an often-overlooked, independent genre. Vocal romanzas were popular from the 15th century onwards, with their roots in the songs of medieval troubadours. Many slow concerto movements carry the subtitle, too, with its implication of softness, gentleness and melodic beauty. But more and more composers through the 19th century grasped the possibilities of the Romance as an instrumental song without words and a form in its own right. They had before them a growing audience of non-connoisseur listeners and amateur performers who would take delight in accessible but touching music: these are the origins of the music on this album.
From an extensive field, Davide Alogna has constructed a beautifully varied sequence of Romances by celebrated and lesser-known composers. The two best examples of the genre remain those composed on the cusp of the 19th century by Beethoven, though they are little heard in concert these days. Seventy years later, Saint-Saëns enriched the repertoire with his own pair of Romances, more richly expressive compared to Beethoven’s delicacy and restraint. From later still the mood changes again, with the fresh Slavonic rhythms of Dvořák’s F minor Romance, the cool beauty of Svendsen’s G major Romance and the ripe sentimentality of Bruch’s F major Romance (originally for viola and orchestra).
Having completed his studies at the Accademia Chigiana of Siena, Davide Alogna was acclaimed by his teacher Giuliano Carmignola as ‘an amazing talent’. A previous recording was praised for its virtuosity and brilliance by the Italian Musica magazine, and his partnership with the veteran pianist Bruno Canino has delighted audiences throughout Europe.
This new recording presents a delightful program of Romances for Violin and Orchestra, a quintessentially romantic genre of a one-movement work of average length (ca 10 minutes), characterized by long-spun lyrical melodies for the violin against the warm and harmonious support of the orchestra.
Presented are the famous Romances by Beethoven (the Op. 40 and 50), Saint-Saëns (the Op. 37 and 48), Svendsen, Dvořák and Bruch.
Beautifully played by Davide Alogna, one of Italy’s best known violinists. Alogna was soloist with conductors like Riccardo Muti, Eliahu Inbal, and Zubin Mehta. The Turkish Karsiyaka Municipality Chamber Orchestra conducted by Hakan Şensoy offers stylish and generous support.
Davide Alogna, violin
Karsyiaka Chamber Orchestra
Hakan Sensoy, conductor 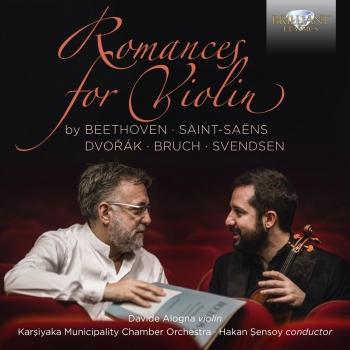 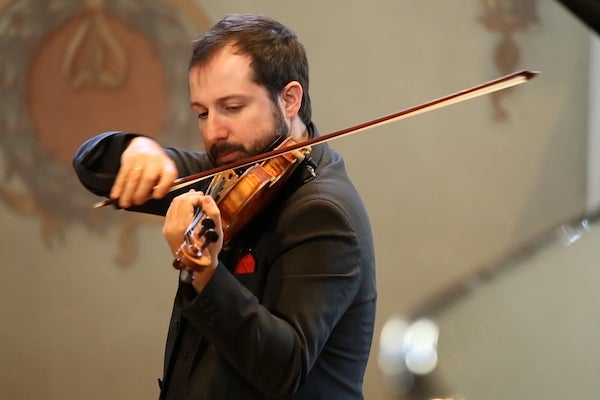 Davide Alogna
He graduated both in violin and piano with honour at Conservatorio “G. Verdi” in Como and he obtain his master diploma in solist violin and chambre music at the Conservatoire Superieur Paris with a “Premier Prix a l’Unanimitè”.
He also studied composition and graduated with a special mention at Accademia Chigiana of Siena with Giuliano Carmignola that describes him as “an amazing talent”.
In 2017, Davide was invited by La Scala Orchestra to play concerts as guest soloist in Europe and on the 29th of October debuted at the Teatro Alla Scala of Milan with the La Scala Chamber Orchestra.
Davide has already debuted in many important halls such as Carnegie Hall (Stern Hall), Teatro alla Scala, Berliner Philarmonie, Suntory Hall of Tokyo, Smetana Hall of Prague, Grand Theatre of Shangai, Salle Cortot of Paris, Gasteig and Herkulesalle in Germany, Palacio de Bellas Artes in Mexico City, Mahidol Hall of Bangkok and the Verdi Auditorium of Milan.
He has been accompanied by some of the world’s leading orchestras, including La Scala Chamber Orchestra, Arturo Toscanini Philarmonic, Orchestra da Camera di Mantova, Orchestra Filarmonica Italiana, Sanremo Symphony, Thailand Philarmonic Orchestra, Munich Kammerphilharmonie, Tchaikovsky Philarmonic, Northern Czech Philharmonic, Chamber Orchestra of New York, New England Symphony, Mexico State Symphony Orchestra, Bellas Arte Chamber Orchestra, Monterrey Symphony, Istanbul Philarmonic, Adana State Symphony Orchestra, Kalisz Philharmonic and the Lutowslasky Filarmonic Orchestra, alongside great soloists and conductors including Natalia Gutman, Eliso Virsaladze, Bruno Canino, Roberto Prosseda, Roberto Plano, Lior Shambadal, Dariusz Mikulski, Giulio Tampalini, Hakan Sensoy and Francesco Lanzillotta.
His solo career began in 2009 with the Prix d’Interprétation Musicale de la Citè Universitaire de Paris, and in 2010 he was awarded the Excellence Prize in Music in Milan.
In 2009 he has given a Stradivari for different exhibitions for RAI 1, for the Council of Ministers, and a tournée with Brahms Sonatas in U.S.A.
On May 2019 has released his debut album for Warner Classics.
Davide has recorded for different labels including Naxos, Brilliant Classics, Amadeus, Velut Luna, Phoenix Classics. His recordings have aired on radio stations such as RAI Radio 3, Radio Classica, Swiss Italian Radio, Venice Classical and Radio France. Amadeus Magazine chose Davide twice as “Artist of the Month” and published articles on his recordings of Schubert violin sonatas and Respighi’s violin concertos. In September 2016 Davide released a CD of music for violin and piano with the pianist Bruno Canino for the national magazine Suonare News.
In 2018 he recorded for Naxos a CD with 3 “world premiere” of Mario Castelnuovo Tedesco violin works as the 3rd Concerto for violin and piano dedicated to Jascha Heifetz that received 5 stars from many international musical magazine as “Musica” and BBC Magazine.
Davide Alogna is Professor of Violin at the ‘F. Cilea’ Conservatory of Music in Reggio Calabria (Italy).
He performs on his precious Giuseppe Fiorini violin (Munchen, 1906) and Carlo Antonio Testore /Ex Wilhelmj violin (Milan, 1715).