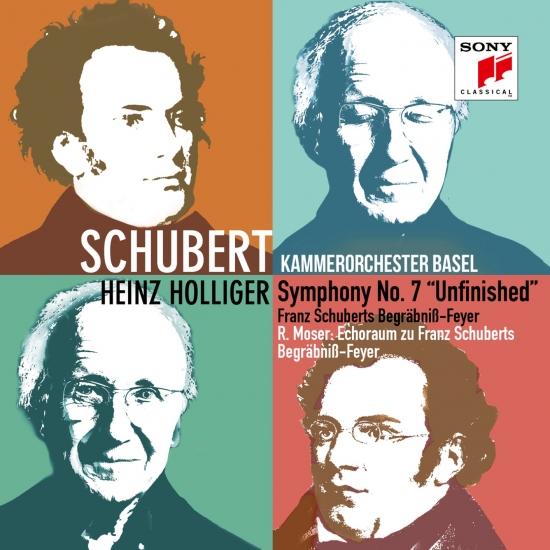 All previously published recordings of the symphonies and other orchestral works by Franz Schubert with the Basel Chamber Orchestra under the Swiss oboist, composer and conductor Heinz Holliger received brilliant reviews.
Heinz Holliger conceived the last recording of his Schubert cycle 'as a Schubert life portrait that spanned sixteen years of composing. The closeness to death is present in all works. The Andante B flat minor, which Schubert drafted in the last days before his death, forms the beginning; The funeral march that Schubert wrote for his own funeral when he was sixteen and in the middle of his life, which lasted just under 32 years, marks the end.
Kammerorchester Basel
Heinz Holliger, conductor 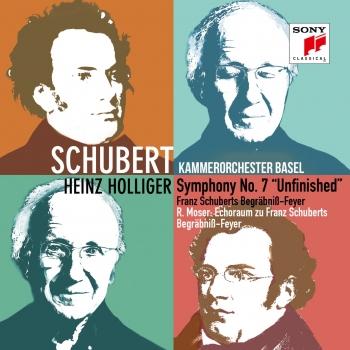 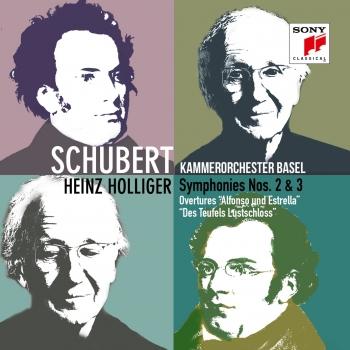 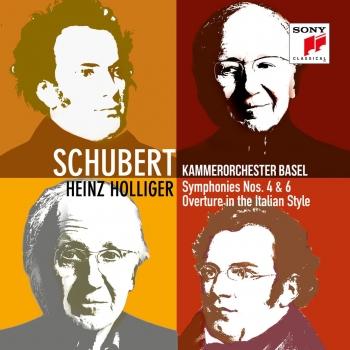 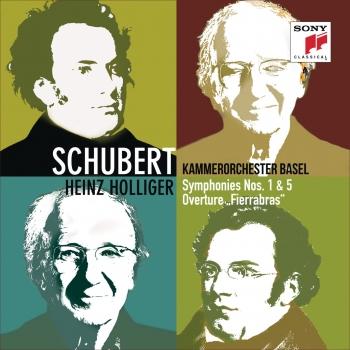 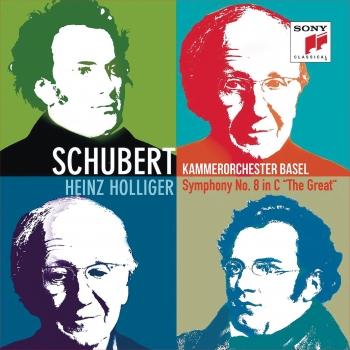 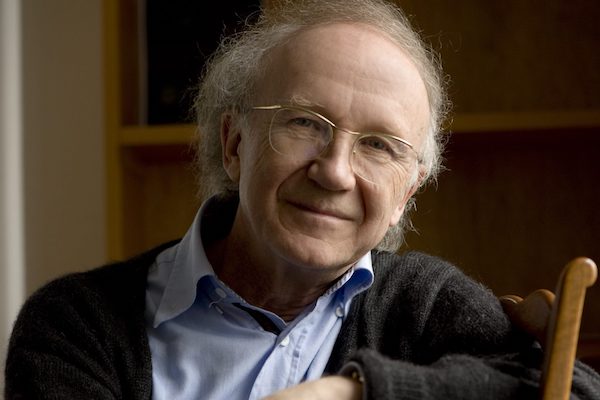 Heinz Holliger
was born in Langenthal (Switzerland, canton of Berne) on 21 May 1939. During his grammar-school education he already studied oboe with Emile Cassagnaud at the Conservatoire of Berne and composition with Sándor Veress. From 1958 he continued his studies with Yvonne Lefébure (piano) and Pierre Pierlot (oboe) in Paris. Between 1961 and 1963 he studied composition with Pierre Boulez at the Music Academy of Basel. After winning first prizes at international music competitions (Geneva 1959, International Music Competition of the ARD 1961), Holliger began to give worldwide concert performances as an oboist. Contemporary composers such as Hans Werner Henze, Krzysztof Penderecki, György Ligeti, Elliott Carter, Witold Lutoslawski, Karlheinz Stockhausen, and Luciano Berio wrote compositions specially for him. Among his outstanding achievements is the rediscovery of forgotten works by 18th-century composers such as Jan Dismas Zelenka and Ludwig August Lebrun.
Holliger's oeuvre covers all genres – from stage works via orchestral, solo and chamber music works to numerous vocal pieces. Almost all compositions bear testimony to a tireless search for the limits of sound and language. His music is often preceded by an intensive examination of artists' or poets' lives and lyrical texts. He has always been fascinated by artists living on the edge of society or at the edge of life. At this point, the Scardanelli Cycle (1975-85) has to be emphasized, in which Holliger turns the last poems of Friedrich Hölderlin into a cycle of 2.5 hours duration for different instrumentations. For this work, the composer was awarded the Premio Abbiati of the Biennale di Venezia in 1995. In Gesänge der Frühe for choir, orchestra and tape, premiered in 1988, Heinz Holliger combined poems by Friedrich Hölderlin with music by Robert Schumann. In the two song cycles Drei Liebeslieder (1960) and Fünf Lieder (1992-2006) for contralto voice and orchestra, he concentrated on poems by Georg Trakl. In the cycle Glühende Rätsel for contralto voice and 10 instrumentalists (1964) Holliger set verses by Nelly Sachs to music. Even poems by Christian Morgenstern were set to music by Heinz Holliger (Sechs Lieder for soprano and orchestra, composed in 1956/57, orchestrated in 2003).
For the stage, Holliger wrote the opera Schneewittchen which was premiered at the Zurich Opera in 1998. The composer adapted the text from the work of Robert Walser in which, in contrast to Grimm's fairytale, the shadows of the characters meet after the actual story. The ECM recording of Schneewittchen won a Grammy Award in 2002. The examination of texts by Samuel Beckett resulted in the composition of three other short stage works: Come and go (1976/77), Not I (1978-80), and What Where (1988).
Holliger's concert pieces too often refer to biographies or literary works: Concerto 'Hommage à Louis Soutter' for violin and orchestra (1993-95, revised 2002) portrays the life of the Swiss painter. In Siebengesang (1966/67) for oboe, orchestra, singing voices and loudspeaker, he incorporates a poem by Georg Trakl. Holliger has composed numerous chamber music works, including the early wind quintet h (1968), Romancendres for violoncello and piano (2003), Contrechant sur le nom de Baudelaire for (bass) clarinet (2008) as well as two string quartets and solo pieces for almost every instrument.
Holliger has been awarded many awards and prizes: the Frankfurt Music Award 1988, the Ernst von Siemens Music Award 1991, the Prix de Composition Musicale de la Fondation Prince Pierre de Monaco for (S)irató 1994, to name but a few. In 2007 Holliger was the first to receive the Zurich Festival Award, in 2008 he received the Rheingau Musikpreis, and will be awarded the Robert-Schumann-Preis of the City of Zwickau in 2017. He was composer-in-residence of the Orchestre de la Suisse Romande and the International Music Festival in Lucerne. In April 2003 the Cité de la Musique in Paris dedicated a whole concert week to the composer, conductor and oboist Holliger. With projects such as the Basler Musikforum cofounded by him in 1987 and cooperations with the Junge Deutsche Philharmonie and the Ensemble Modern, Holliger is particularly involved in the presentation of new music.