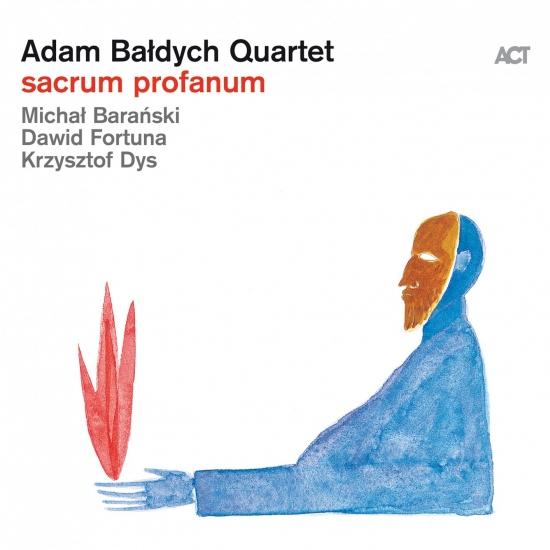 "Sacrum Profanum" represents a new beginning for Polish violinist Adam Bałdych – but also a look back into his past. He was once a sixteen-year-old firebrand who set out to conquer the jazz world. And when his ACT debut album "Imaginary Room" came out in 2011, he was hailed by the respected German broadsheet the FAZ as having "the finest technique among all living violinists in jazz". The audacity of Bałdych’s lines was so breathtaking, he could almost have been playing a wind instrument; his multi-voiced motifs were more like chord-playing by pianists, and over and above these aspects was the ever-present desire to experiment and to transcend genre boundaries.
And yet all of this, right up to and including two recent albums with the Helge Lien Trio, can now be seen as just a starting-point for the voyage of self-discovery that Bałdych has documented on "Sacrum Profanum". Like many other people in these manic, frenetic times, he found that he was searching more than ever for harmony, certainty, timeless values and indeed some truths about himself. I decided to reach out for sacred music, from the medieval mystic Hildegard of Bingen and the renaissance composer Thomas Tallis to the contemporary Russian avant-gardist Sofia Gubaidulina," Bałdych explains. "My goal was to capture the timeless beauty of the mystical music of these exceptional composers and interpret their work through contemporary musical language."
Alongside five pieces from this heritage (in addition to those already mentioned, there is one by Gregorio Allegri and the "Bogurodzica" – composer unknown) there are five new compositions by Bałdych himself. What unites all of them is a combination of the spirit of improvisational freedom and an inclination towards a classical sound.
"As a young violinist, I was expelled from music school for playing jazz, for improvising and for rebelling against classical music in an attempt to redefine the sound of the violin. Now, once again, I felt the imperative to connect with my greatest inspiration at the moment – classical music," is how Bałdych explains the back-story of "Sacrum Profanum".
Together with his outstanding Polish band of Krzysztof Dys on piano, Michal Baranski on bass and David Fortuna on drums, he has been intent on exploring the possibilities in sound offered by New Music. Orchestral instruments such as the Gran Cassa, cymbals or gongs were added, and the piano was prepared for some of the pieces. And Bałdych himself drew inspiration from the unique sound qualities of the Renaissance violin.
Just in case there might be any misunderstanding: "Sacrum Profanum" is not a classical album, and certainly not a new-age album. Bałdych’s esthetic has no boundaries, blends the depth and language of new classical music and yearning to convey personalities through self-expression of jazz. His music is deeply rooted in rich European tradition, with Polish and Eastern European spices.
And quiet it is not. Yes, there are meditative passages, where the sound is shaped in a classical, form-conscious way; but these episodes stand in contrast with fast, furious and rocky outbursts (especially in “Repetition") and rhythm playing that is generally pretty forceful. Even Hildegard of Bingen's "O Virga ac diadema" acquires a fast, driving feel as it sways back and forth. And Gubaidulina's "Concerto For Viola And Orchestra" becomes a roisterous suite, somewhere between a film soundtrack and free jazz. Bałdych’s concluding solo on "Jardin" almost sounds like a pop song. He plays it without using the bow, just plucking and striking the violin strings. He has taken all the elements that have made his music so distinctive and put them into the mix on this album. Or, as he puts it: "For me, contemporary virtuosity is based on the most sophisticated and varied of sounds, full of new colours and different techniques, which I discover by experimenting on my instrument. It gives me an infinite sea of possibilities.”
Adam Bałdych went in search of his own new form of expressiveness. And on "Sacrum Profanum", he has found it.
Adam Bałdych, violin & renaissance violin
Krzysztof Dys, piano, prepared upright piano & toy piano
Michał Barański, double bass
Dawid Fortuna, drums, crotales & gran cassa
Recorded by Klaus Scheuermann at Clouds Hill Recordings Studio Hamburg, November 20 & 21, 2018
Mixed and mastered by Klaus Scheuermann at 4ohm Studio Berlin, December 4, 2018
Produced by Adam Bałdych