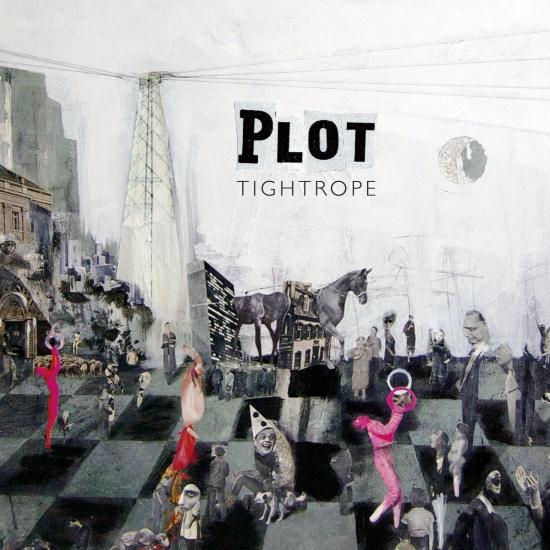 PLOT dares to dance on a tightrope, anchored to rock classics. On their new album “Tightrope” drummer Philipp Scholz, bassist Robert Lucaciu and tenor saxophonist Sebastian Wehle show their musical prowess by taking classic pieces by the Beatles, Led Zeppelin, Credence Clearwater Revival and Santana and reimagining them in such a way that they become completely their own.
Playing compositions that are so well-known that everyone considers them holy and untouchable in their original version is like dancing on a tightrope. PLOT (winner of »Junger Münchner Jazzpreis 2014«) courageously faces this high-wire act. They tighten their rope smoothly and elegantly, with great concentration and with an immense improvisational ease. The pieces are from the years 1967 to 1970 and one can immediately recognize that they have been given their own unmistakable PLOT-face. With incredible sensitivity, the musicians seize the compositions, attacking the themes with passion, bowing to the melodies and paying homage to the grooves.
“Dazed and Confused” by Led Zeppelin crackles and smokes until it finally bursts into flames. “Strawberry Fields Forever” by the Beatles is turned into an edgy hymn. “Long and Winding Road” becomes a silent meditation. PLOT bases “I Put a Spell on You” on the Credence Clearwater Revival version making it mysterious, hissing, and intense. Another CCRs tune, “Better Run to the Jungle” is a weird, crazy freak show with vocals while “Across the Universe” shows the whole range of PLOT’s sound.
PLOT was founded in 2009 by two Saxons and one Bavarian who are in their mid 20s. All of them graduated from the Leipzig Academy of Music and consider this band their “baby”, and a true labor of love.
With more than 100 concerts and three CDs under their belts, the trio has developed their own unique sound.
One can sense the atmosphere of togetherness: Wehle, Lucaciu, and Scholz can do everything, but don’t have to show everything. They have grown together and have ripened as artists. As instrumentalists, they are sought after in the German jazz scene and beyond; together they are a band where each has his own independent and supportive voice.
The sound of “Tightrope” develops a pull stemming from the voice of the instruments themselves. Bassist Robert Lucaciu, is something of an intonation perfectionist — he insists on getting a deeper undertone from his instrument by not tuning it to the standard pitch of A 440 Hz. For their latest album “Tightrope”, Lucaciu chose A 445 Hz instead. Only an expert would notice, but the fact that this recording sounds different, rounder, warmer, and earthier is not a subjective perception. PLOT dances on a tightrope and it’s an irresistible sensation!
Philipp Scholz, drums
Robert Lucaciu, double bass
Sebastian Wehle, tenor saxophone
Recorded and mixed September 2014 by Florian H. Oestreicher at realistic sound, Munich, Germany
Mastered by Christoph Stickel, Munich, Germany 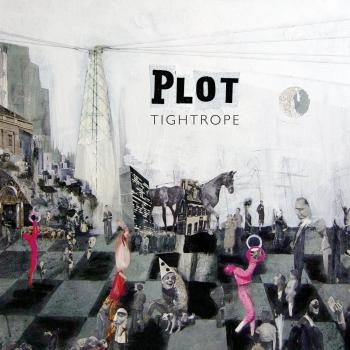 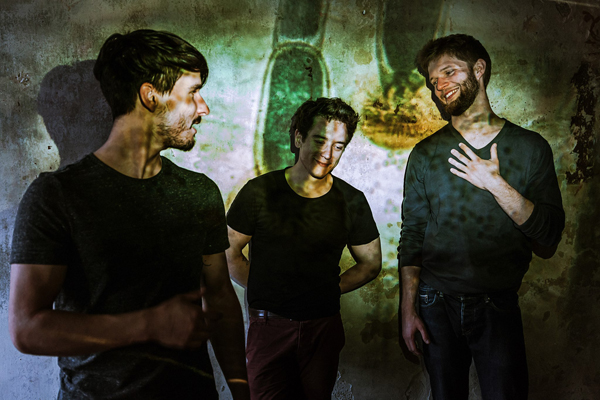 PLOT
The saxophonist Sebastian Wehle, bassist Robert Lucaciu and drummer Philipp Scholz have something to say and continuously get to the point. They do this in a fresh and yet astoundingly philosophical way. They do this with esprit, mind, and heart and they don’t get lost in verbose ramblings. Way too many stories have them. That is why their music is sparkling new, contemporary and not nostalgic, and in no way do they follow the same old worn out clichés.
Of course, they know their ancestors. They have studied and internalized. Nevertheless, now is the time for them to do their own thing. This trio swings and sways into a new jazz that has been constantly developing for more than a half a century. So it finds its own individuality that first charges the results with relevance. Plot does not deliver copies; instead they express themselves in their own constructions. They do not lead their public through a museum, rather through the streets of now. Based on their origins, they talk of here and now. They do this in poignant flights of ideas, energetic, contemplative, and it is just as witty as it is serious. New doors are constantly opening. (Ulrich Steinmetzger)