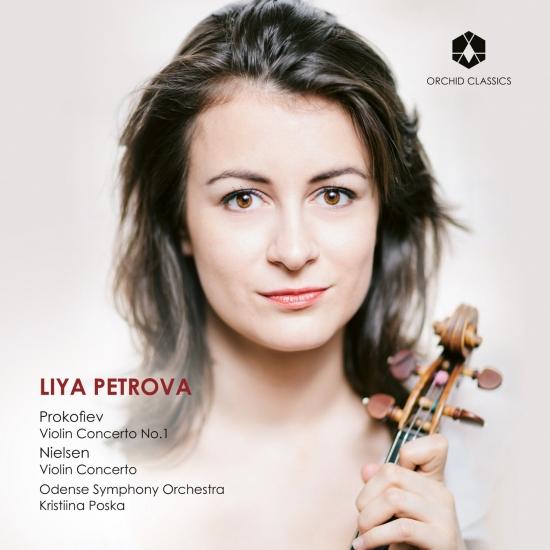 After Liya Petrova won joint first prize at the 2016 Carl Nielsen International Violin Competition, jury President Nikolaj Znaider declared he had been 'absolutely blown away by how she had absorbed the Nielsen violin concerto - how it had become hers'. From her debut album on Orchid Classics you can hear just why she made such an impression on those who heard her performance. The Strad praised the 'iron will' Petrova brought to Nielsen's concerto; a fortitude which is matched on this recording by the sensitivity in her approach to the first violin concerto of Sergei Prokofiev.
Liya Petrova, violin
Odense Symphony Orchestra and Carl Nielsen International Competition
Kristiina Poska, direction 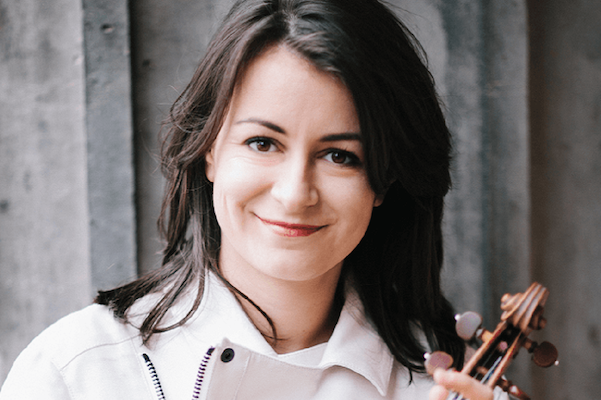 Liya Petrova
Petrova’s combination of fortitude and sensitivity has brought her competition victories in Germany, Switzerland, Croatia and Denmark. She was awarded First Prize at the 2016 Carl Nielsen International Violin Competition where she was praised by The Strad for the ‘iron will’ she brought to Nielsen’s concerto and the ‘command’ which she displayed in Tchaikovsky’s.
As a soloist, Liya has performed with the Luxembourg, Antwerp, Monte-Carlo and Kansai Philharmonic Orchestras, the Munich and Lausanne Chamber Orchestras, the Orchestre National de Montpellier, the Staatskapelle Weimar and the KlassikPhilharmonie Hamburg.
In 2016 Liya was invited to appear at the concert series Martha Argerich and Friends for the second time. As a chamber musician, she has collaborated with Argerich and with Yuri Bashmet, Mischa Maisky, Renaud Capuçon, James Ehnes, Nicholas Angelich, Yuja Wang, Antoine Tamestit and others. She has made extensive festival appearances in Germany and France.
Liya was born in Sofia, Bulgaria. She studied at the Hochschule für Musik und Theater in Rostock with Petru Munteanu, with Augustin Dumay at the Chapelle Musicale Reine Elisabeth in Brussels, with Antje Weithaas at the Hochschule für Musik Hanns Eisler in Berlin and with Renaud Capuçon at the Haute École Musique in Lausanne. She is a laureate of the Tibor Varga and Louis Spohr Competitions and has been admitted as a soloist of the Deutscher Musikrat.
Kristiina Poska
Born in the Estonian town of Türi, Kristiina Poska began studying choral conducting at the Music Academy in Tallinn in 1998 and then continued with orchestral conducting at the Music Academy Hanns Eisler in Berlin with Christian Ehwald in 2004.
Kristiina Poska has worked with the Estonian National Symphony Orchestra, the Radio Symphonies in Cologne, Leipzig, Saarbrücken/ Kaiserslautern, Frankfurt am Main and Vienna, at Vienna Konzerthaus with Camerata Salzburg, the Tonkünstlerorchester Niederösterreich, the Brucknerorchester Linz at the Oberösterreichische Stiftskonzerte, Munich Philharmonic, Kammerphilharmonie Bremen, Tonhalleorchester Zurich, Sinfonieorchester Basel, Orchestre Philharmonique de Strasbourg, Gothenburg Symphony, the Royal Stockholm Philharmonic and the Tokyo Symphony Orchestra. Opera engagements brought her to Volksoper Wien, Hamburgische Staatsoper, Finnish National Opera, Royal Swedish Opera, the Norwegian Opera and Opera Zürich.
Kristiina Poska was supported by the Conductor’s Forum of the Deutscher Musikrat and won the prestigious German Conductor’s Prize in April 2013. Before that she had already received numerous international awards including from the Dimitris Mitropoulos Conducting Competition Athens 2006, from Donatella Flick Competition conducting the London Symphony Orchestra in 2010 as well as at the renowned Malko Competition in May 2012, where she also received the audience prize following the final concert with Danish National Symphony Orchestra.
Odense Symphony Orchestra and Carl Nielsen International Competition
The Odense Symphony Orchestra – one of Denmark’s five regional orchestras – was established in 1946, but its roots go all the way back to about the year 1800. From being a theatre orchestra that also played symphonic music, the orchestra today is continuously developing and expanding its modern symphony orchestra with 72 permanent musicians and a high level of activity. Concerts and productions with Odense Symphony Orchestra vary in terms of size and genre: from symphony concerts, light classical and opera to chamber music, children/youth concerts and crossover. Odense Symphony Orchestra is the owner and host of Carl Nielsen International Competition, and the orchestra and its musicians play an important role in the competition as jury members, repertoire consultants and contact persons to many international artists.
The first of the Carl Nielsen International Competitions was held in Odense in 1980. After nearly four decades, the violin, clarinet and flute competitions have established themselves as some of the most demanding and rewarding in the world, by highlighting Carl Nielsen’s musical masterpieces, and offering each winner the chance to launch a significant international career.