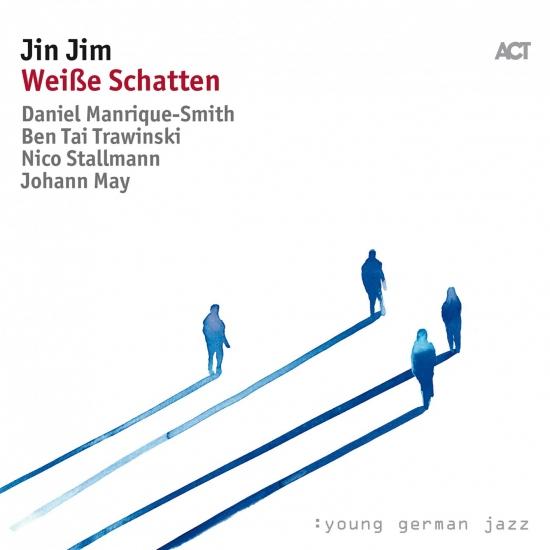 "Vertical lift-off" was how broadcaster NDR described Jin Jim’s rise on the German jazz scene. These words are justified, if one considers the relatively short backstory which now culminates in their ACT debut album “Weiße Schatten” (White Shadows).
In 2013 Peruvian-born flautist Daniel Manrique-Smith, bassist Ben Tai Trawinski, guitarist Johann May and drummer Nico Stallmann started up Jin Jim. In their first year as a band they were voted through by the public into the finals of the JazzTube Festival in Bonn. In the following year, the quartet won the “Future Sounds” competition at the Leverkusener Jazztage festival out of a field of nearly 200 entrants, and also released their first album “Die Ankunft” (The Arrival). Their meteoric ascent is based on the innovation which they bring to the music. Latin, jazz and rock all collide here with maximum impact. The group’s bassist Trawinski, who also composes most of the group’s repertoire, has set out their essential direction: “Rhythmically highly complex yet harmonically accessible, and with influences ranging from flamenco to Indian music and pop.”
This was what brought Jin Jim to the attention of the “Young German Jazz” series, ACT’s initiative dedicated to developing the talent of outstanding young German musicians and turning it into success. Meanwhile in 2016, Jin Jim set off on their first major tours with the support of Germany’s international cultural organization the Goethe Institut. They first travelled in Peru, the country of Daniel Manrique-Smith’s birth, and in the autumn toured in five countries in Africa. By 2017 their moment had come. “We were lucky enough to be in the right place at the right time,” says Manrique-Smith. That ‘right place’ was the Jazz Baltica Festival where the four performed on the main stage. “We got standing ovations. I had goose bumps for the next three days.” And among that ecstatic audience was Siggi Loch of ACT – who signed Jin Jim under contract to the label.
In February 2018 they went into the studio to record “Weiße Schatten”. Jin Jim showed once again how refined and individual their sound is. It is indeed rare for a young band to emerge which is quite so unified.
One explanation for this is that although Jin Jim was started up in 2013 when all its four members were around 30 years old, the common threads that bind them together go back much further. Trawinski comes from a music-obsessed family with ancestors in Poland and Croatia and had played guitar, flute, piano and singing before eventually the bass became his instrument. May is a musician whose deep engagement with Latin American music was intensified by spending a period of study in Havana. Stallmann has played drums in various bands from folk and rock 'n' roll to modern jazz and world music, as well as working on dance and theatre productions. All three studied at the Arnhem Conservatory in the Netherlands and have been playing together ever since. These common links explain the naturalness with which May, Trawinski and Stallmann set about preparing the rhythmic fundament for complex, rapid and tricky pieces such as “Duende” or “Mankafiza”, enabling Daniel Manrique-Smith's flute to fly free.
The flute is a rare instrument in jazz, most often just dropped in occasionally to add an additional tone-colour. In Jin Jim its function goes way beyond that; it carries the leading solistic role. Manrique-Smith, who had studied in Frankfurt and at the Musikhochschule (Conservatoire) in Cologne before appearing with such stars as Dee Dee Bridgewater, Samuel Rohrer and Lalo Schifrin, plays the instrument in an uncommonly virtuoso and versatile manner. In “Weiße Schatten” he combines a whole range of expressive possibilities, from a silvery classical tone, or the consistently yet lightly breathy attack and bright colours of Latin America, to completely untamed jazz solos. And when Manrique-Smith hums, blows and sings into his instrument, Jethro Tull’s Ian Anderson could be in the room.
And there’s more. The good old days of art rock are born again, not just with Stallmann’s weighty drum beats but also May’s anthemic core guitar sound (particularly on “Dreaming”, strengthened by singing which really works in the context, and by episodes of distortion where he nearly cranks it up into heavy metal. This is new music for the gut – and the feet – created totally in the spirit of jazz. Jin Jim are well on their way.
Daniel Manrique-Smith, C, alto & bass flutes
Johann May, guitar, electronics
Ben Tai Trawinski, bass
Nico Stallmann, drums 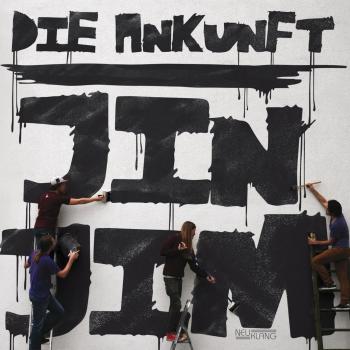 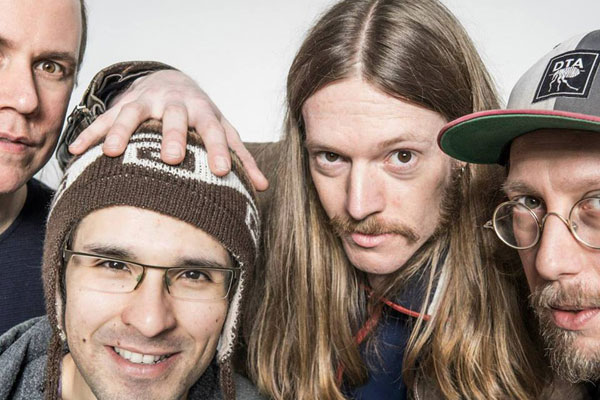 Jin Jim
is a Modern-Jazz-Rock-Band consisting of young musicians from Cologne, Bonn and Peru. Their music is like a journey through cultures and time: with Hip-Hop Beatbox Flutes, German Balkangrooves, soundscapes from Island and Spain, songs about the weather or the pompous arrival of a monarch. So many different influences come together when we hear Jin Jim's unique sound, that seeks to fuse music styles with coherence. Jin Jim’s compositions are characterized by strong rhythms and a vigorous drive, letting the energy of rock music meet the improvisation of jazz. In 2014 the quartet won the „Futuresounds“ Jazz Competition at the 35th edition of the „Leverkusener Jazztage“, selected out of more than 200 competitors.