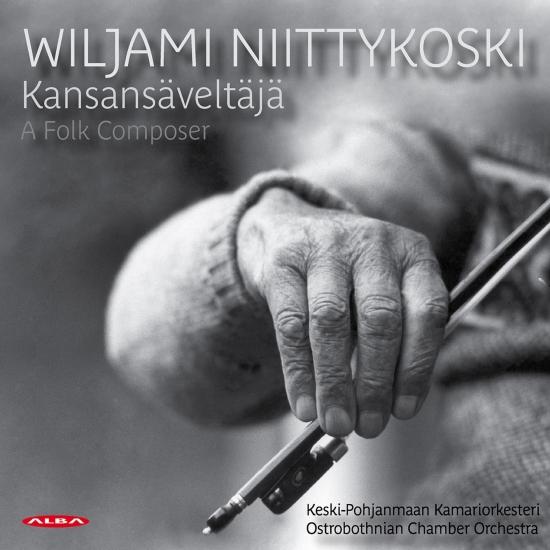 The Central Ostrobothnian Chamber Orchestra, celebrating its 50th anniversary, pays tribute to both its roots and Niittykoski's life's work with the album "Niittykoski - Folk Composer" (ABCD 468). Composer, poet and playwright Wiljami Niittykoski (1895-1985) was a native of Salonkylä in the Kaustinen municipality, known for its vibrant folk music tradition. Niittykoski composed songs, instrumental compositions and songs inspired by folk music. He also collected old pelimannis tunes and composed salon music.
Perhaps the composer's most famous piece, Leikkivät sävelet, is heard on this album in its original form, as Niittykoski himself orchestrated it for the Salonkylä orchestra. The other compositions on the album have been arranged for this recording for string orchestra. The arrangements are by Timo Alakotila, Kreeta-Maria Kentala, Iikka Kotaja and Lauri Pulakka of KPKO.
Ostrobothnian Chamber Orchestra
Juha Kangas, conductor 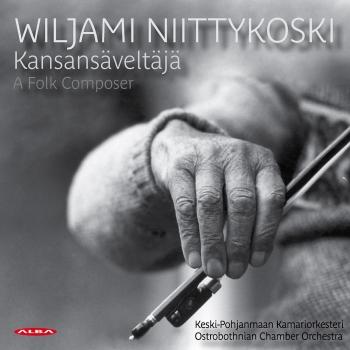 Juha Kangas
The Finnish conductor, Juha Kangas, was born in the Ostrobothnian region of Kaustinen, the centre of a strong tradition of Finnish itinerant musicians. At the age of thirteen, this son of a local organist decided he would learn the violin. From then on, not a day went by when he could not be found playing it. He studied with the composer Erik Fordell. But it was the traditional music of the itinerant players which was to captivate him. Along with his brothers Olli and Timo, he started to perform as a young boy. Later on Juha Kangas studied in Helsinki at the Sibelius Academy with well established composers such as Rautavaara, Heininen and Sallinen. But it was the legendary Professor of Violin Onni Suhonen who became his mentor.
Born in Karelia, Suhonen had himself studied with Jenő Hubay and Leó Weiner in the 1920’s in Budapest. It was not only his ability as a violin teacher which most impressed Kangas: his experiences as a member of Suhonen’s string quartet class were to remain with him for the rest of his life. It is here we must search for the sources of Kangas’ own style – a veritable confluence of melodic freedom coupled with a formal discipline, of carefully modulated elasticity and dance-like, sprung rhythm, and highly polished, alert musicality. Suhonen’s quartet class was actually a clandestine training ground for conductors, and one that also produced Okko Kamu, among many others. From 1966 to 1971 Kangas played viola in the Helsinki Philharmonic, where he got to know the repertoire from the ‘inside’. Then, suddenly, he decided to create his own musical dictates. He accepted a post as teacher of the violin at the Ostrobothnian Conservatory in Kokkola, a small town on the Bothnian coast with 36,000 inhabitants and just 50 kilometres away from his birthplace.
In 1972 Juha Kangas founded a chamber orchestra whose members, aged between 10 and 11, were all students at the Kokkola Conservatory. Over the years this ensemble grew into a student orchestra proper, and thence into a semi-professional orchestra. In 1989 the Keski-Pohjanmaan Kamariorkesteri (Ostrobothnian Chamber Orchestra) turned professional. And in 1993 it received the Nordic Council Music Prize, the most prestigious musical award of the Nordic countries. For a few years now, the orchestra has had its own guest conductor, Sakari Oramo.
Juha Kangas never actually wanted to become a conductor. He had always thought of himself of a musician’s musician. As he points out, “I really don’t have a philosophy of conducting. I just try to give of my best.” For a long time, and as a matter of principle, he declined offers to appear as guest conductor of other orchestras. The only thing that mattered to him was to promulgate music the quality of which he was entirely convinced. This, of course, turned out to be music of the Nordic countries. Kangas helped establish many Nordic and Baltic composers. To mention but a few: Pehr Henrik Nordgren, Anders Eliasson, Per Nørgård, Peteris Vasks, Erkki Salmenhaara, Kalevi Aho, Einojuhani Rautavaara, Usko Meriläinen, Lepo Sumera, Erkki-Sven Tüür, Onute Narbutaite, Ketil Hvoslef and Karin Rehnqvist.
The Ostrobothnian Chamber Orchestra
founded by its honorary conductor Juha Kangas in 1972, has been a professional orchestra since 1989. The homogeneous sound and dynamic impact of the orchestra are a result of years of playing together. Sakari Oramo served as artistic director of the orchestra between 2013 and 2019. His successor in this position is Malin Broman.
The orchestra’s repertoire covers periods in the history from the baroque to the present day. The OCO has made an outstanding contribution to the promotion of contemporary Finnish music. Many Finnish composers have written
for and dedicated works to the Orchestra. The OCO has also close contacts with composers both in Scandinavia and the Baltic countries and has premièred more than 160 works to date.
The OCO was awarded the Nordic Council Music Prize in 1993 and has since been the recipient of many other distinctions. The OCO performs regularly with top international soloists and has released more than 60 recordings. Its foreign tours have taken it to several European countries, Japan and USA.