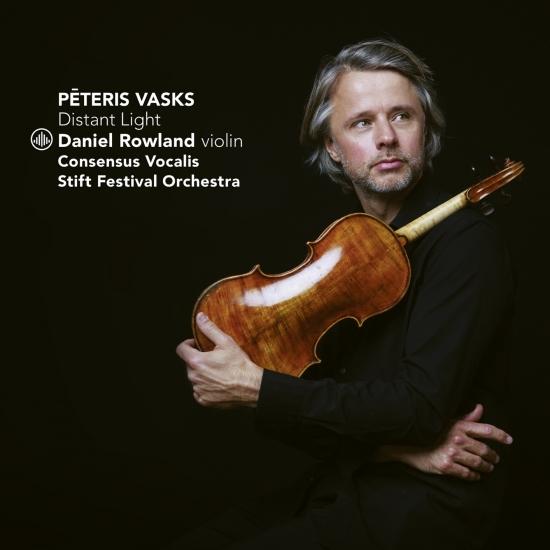 This album offers an overview of four of Peteris’s most iconic works, from the large scale, dramatic Violin Concerto ‘Distant light’, and the magically dreamy meditation ‘Lonely Angel’, to his evocation of Latvian landscape and birdsong ‘Plainscapes’ and the extatic ‘Dona Nobis Pacem’.
The recording was made live at last summer’s Stiftfestival in the Netherlands, where Daniel is Artistic Director. The trailer for the recording was shot during the rehearsal, and can be seen in the header to this post, or by following this link. Daniel comments:
“Peteris Vasks ‘Lonely angel’, recorded live last August in the beautiful Sint-Plechelmusbasiliek in Oldenzaal (The Netherlands), with the Stift Festival Orchestra, full of amazing musicians and friends. Pēteris Vasks was with us for the rehearsals and the concert and the experience was inspirational and unforgettable.”
Daniel is well-versed in, and a great admirer of, the music of Vasks, having performed and filmed his first concerto ‘Distant Light’ (also included on this disc) at the Stiftfestival 2016, and having included his ‘Castillo Interior’ for violin and cello on recent disc ‘Pas de Deux’ alongside duo partner Maja Bogdanovic.
Daniel Rowland: The first piece by Peteris Vasks that I heard, about a decade ago, was his magnificent Violin Concerto ‘Distant light’, already a modern classic, and I was blown away by the deep emotional impact of this extraordinary music, that seemed to me both wonderfully mysterious, connected to ancient times, touched by a sublime spirituality and at the same time viscerally exciting and with moments of stunning virtuosity. Last summer, when Peteris accepted my invitation to come to the 15th edition of my Stiftfestival in Holland as Composer in Residence I was truly excited at the chance to work closely with him on several of his pieces. At the festival we performed many of Peteris’ works, solo, chamber and orchestral, with wonderful artists. The week culminated with the concert that you now hold in your hands, in the splendid, deeply atmospheric and acoustically wonderful 15th century Plechelmus Basiliek in Oldenzaal.
Daniel Rowland, violin
Maja Bogdanović, cello
Stift Festival Orchestra
Consensus Vocalis
Benjamin Goodson, conductor
Thomas Carroll, conductor 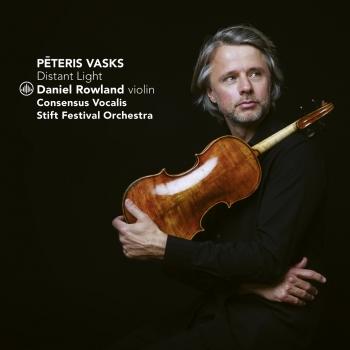 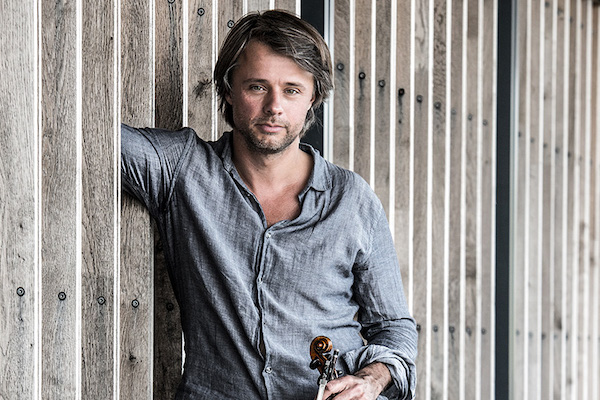 Daniel Rowland
Dutch/English violinist Daniel Rowland’s playing has been acclaimed as “wonderful, ravishing in its finesse” by The Guardian, “totally and truly charismatic” by Beeld, while The Herald praised his “astonishing sound and uniquely single-minded intensity”.
Daniel has established himself on the international scene as a highly versatile, charismatic and adventurous performer. Concerto performances in recent seasons have included Philip Glass with Orchestre de Picardie, Bernstein with the Princeton and Columbus Symphony Orchestras, Schnittke in Finland, Vivaldi/Piazzolla Seasons with the Ulster Orchestra and the world premiere of the Rogowsky Violin Concerto with the Dubrovnik Symphony Orchestra. Daniel will soon appear with the Guanajuato Symphony Orchestra in Mexico to give the very first performance of the Michel van der Aa Violin Concerto in that region. He also looks forward to returning to the USA to work with the Princeton Symphony Orchestra again in 2020.
He has performed in many of the world’s most prestigious concert halls, most notably the Concertgebouw in Amsterdam, New York’s Carnegie Hall, the Royal Albert Hall in London, the Glinka Hall in St. Petersburg and the Gulbenkian in Lisbon. He has collaborated with noted conductors such as Andrei Boreiko, Djanzug Khakidze, Viktor Liberman, Lawrence Foster, Heinz Holliger, Francois Xavier Roth, Rossen Milanov, Anthony Hermes and Jaap van Zweden.
A passionate chamber musician, Daniel has performed with artists as diverse as Ivry Gitlis, Polina Leschenko, Heinz Holliger, Dawn Upshaw, Gilles Apap, Alexander Lonquich, Marcelo Nisinman, Michael Collins, Nicolas Daniel, Lars Vogt, Willard White and Elvis Costello. He is a frequent guest at foremost international chamber music festivals such as Kuhmo, Stellenbosch, Risor, Sonoro, Beethoven Festival Chicago, Rio de Janeiro, Chiemgau and Osnabrück. The Stift International Music Festival, of which he is the founder and artistic director, saw its fifteenth edition in August 2019.
Daniel forms an acclaimed recital duo with pianist Natacha Kudritskaya. Their recording ‘Les années folles’ (Ravel, Debussy, Poulenc, Gershwin & Antheil) for Gutman Records was released in June ’15 and was followed by their disc of Enescu violin/piano works for Champs Hill Records in November ’16, with a new Franck/Chausson release coming shortly. Daniel and the superb Serbian/French cellist Maja Bogdanovic also perform together regularly as a duo, with engagements in the USA and at many of Europe’s leading festivals. Daniel is also a founding member of the contemporary tango quintet ‘ChamberJam’.
Until May 2019, Daniel was first violinist of the renowned Brodsky Quartet. During his twelve years with them they toured extensively worldwide and made many recordings, mostly for Chandos. In March 2016 the Brodsky Quartet recorded the complete Shostakovich quartets, live at the Muziekgebouw in Amsterdam, to rave reviews.
Daniel is professor of violin at the Royal College of Music in London and an International Visiting Artist at RIAM in Dublin. He plays the “Ex-Rode” Guarneri del Gesù violin (Cremona ca. 1736), kindly on loan from the Dutch Musical Instruments Foundation.
Daniel was born in London, and started his violin lessons in Enschede after his parents moved to Twente in the eastern Netherlands. He studied with Jan Repko, Davina van Wely, Herman Krebbers, Viktor Liberman and Igor Oistrakh. Meeting Ivry Gitlis in 1995 was of great significance, leading to lessons in Paris and, later, to musical collaborations. Daniel’s competition successes include first prize at the 1995 Oskar Back competition at the Concertgebouw in Amsterdam and the Brahms Prize in Baden-Baden.