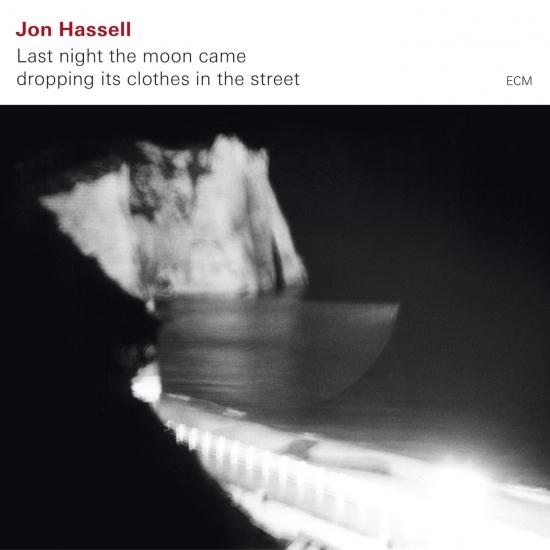 25 years after his highly influential “Power Spot” album, Jon Hassell returns to ECM with his collective Maarifa Street and some spacious Fourth World dub-montage music, his uniquely vocal trumpet sailing forth into mysterious soundscapes. Jon Hassell describes “Last night the moon” as “a continuous piece, almost symphonic, with a cinematic construction” and drifting “clouds made out of many motifs”. Core material is drawn from a session at Studios La Buissonne near Avignon in April 2008, with detail added in Los Angeles in November and December. Live recordings from Courtrais, Belgium and London, as well as a remix of a piece originally created for a Wim Wenders movie, are also integrated into the atmospheric, filmic flow, along with short samples snared throughout 2008.
Not only does Last night the moon came dropping its clothes in the street carry the most evocative title in the ECM catalogue, it also closes a 25-year gap between trumpeter-composer Jon Hassell’s first label date, 1986’s Power Spot. About said title, one need only know it comes from the poetry of 13th-century Sufi mystic Rumi to find insight into the music it indicates. Rumi’s embodiment of spiritual evolution is, much like Hassell’s artistry, a parthenogenetic organism: it nurtures itself, grows with and through itself over time.
Last night the moon came… is in many ways the ambient underbelly of Nils Petter Molvær’s Khmer and is sure to enchant fans of the same. The soupiness of his sound is in full effect here, opening to an attunement of the cosmos that uses sun flares as its ink and comet tails as is brushes—a sound honed over eons and realized through the breath of an artist whose own universalism speaks in cosmic, singing electricity. Yet the more we listen to this music, the more we realize it comes from a space within rather than without, a space found not through the telescope but through the microscope.
The presence of violin, for example—courtesy of Kheir Eddine M’Kachiche, whom Hassell encountered on SIWAN—is a deeply biological one. M’Kachiche’s ghostly mitochondria snake their way through an outer-to-inner progression that smoothes within earshot in the introductory “Aurora” and fades from it in the pale of “Light On Water.” At first, the trumpet is tucked safely away in some inter-dimensional pocket, making its first appearance only in the appropriately titled “Time And Place,” a fraternal tone to the violin’s sisterly wisdom. With the music’s x- and y-axes thus established, we have free fall.
Balance of the unplugged and the wired, of matter and ether, continues throughout. The sense of patience is nocturnal indeed, the song of Hassell’s instrument multifaceted and luminous. The overall effect is one of perpetual exhale. Tasteful applications of instruments mark the path with cohesive memories. Sections such as “Clairvoyance” trace their development by the same clock yet spin their tails in more subterranean designs, diurnal and flowering, while the bass of “Courtrais” throbs just overhead, yielding like a suspension bridge during an earthquake. Purely descriptive moments are rare. Rather, the flow proceeds by way of feel. “Blue Period” is perhaps the closest we get to a painterly aesthetic, the height of Hassell’s reach evoking a bird of prey surveying the territory below as if it were its own body, splayed and stretched to the span of a continent. Like the drumming in the album’s concluding steps, it makes fleeting contact with land, shifting from shadow to shadow, half here and half gone.
Jon Hassell, trumpet (1-4, 6, 8-10), keyboard (3, 6)
Peter Freeman, bass (1-6, 8-10), percussion (2), guitar (7), samples (9)
Jan Bang, live sampling
Rick Cox, guitar (1, 2, 4, 7, 9), strings (4)
Jamie Muhoberac, keyboard (1, 2, 4, 9), drums (4, 9)
Kheir Eddine M'Kacich, violin (2-5, 7)
Pete Lockett, drums (2)
Eivind Aarset, guitar (3, 8-10)
Helge Norbakken, drums (3, 8, 10)
Thomas Newman, strings (4)
Dino J. A. Deane, live sampling (6, 7)
Steve Shehan, percussion (6, 9)
Recorded April 2008, Studios La Buissonne, Pernes-les-Fontaines
Engineered by Gérard de Haro and Nicolas Bailla
“Courtrais” recorded live in Courtrais, Belgium
“Abu Gil,” “Northline,” and “Light On Water” recorded live at Kings Place, London, November 2008
Mixed by Peter Freeman in Los Angeles, Nov/Dec 2008
Produced by Manfred Eicher, Jon Hassell 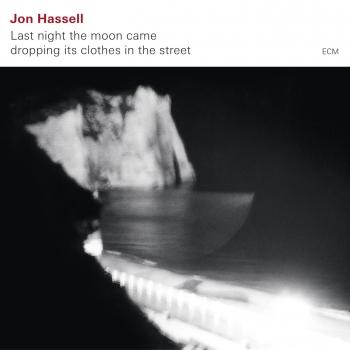 Last Night The Moon Came Dropping Its Clothes In The Street