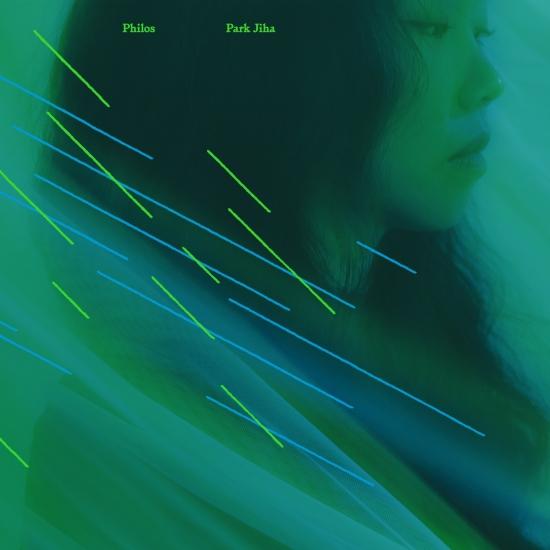 Park Jiha’s second album, [Philos], is a record of love for time, space and sound.
Park Jiha’s debut album “Communion” drew well deserved attention to the young Korean instrumentalist/composer’s vivid soundworld. The widely acclaimed album graced 2018 critics lists at The WIRE, Pop Matters and The Guardian. Her new album “Philos”– which she calls an evocation of her “love for time, space and sound” –is every bit as inventive, elegant and transcendent as her debut
While Park Jiha’s music is often contextualized by its kinship with minimalism, ambient and chamber jazz, her creative backbone is Korean traditional music. Jiha formally studied both its theory and practice and has mastered three of its most emblematic instruments:
“I play a traditional Korean instrument called piri which is like an oboe. Piri is a double reed bamboo flute so it can be quite loud. But I also choose saenghwang (mouth organ), yanggeum (hammered dulcimer), percussion or vocal according to the type of music I’m composing. Picking an instrument has to do with the voice in which I choose to talk. Just like human voice, every instrument has its own charm.”
On “Communion” Park Jiha wove these ancient instruments into an ensemble sound that included other musicians contributing on vibraphone, saxophone, bass clarinet and percussion. The effect felt revelatory. An admixture that brought together different epochs and cultures and yielded sonic possibilities that were more futurist than traditionalist. It seemed to naturally evoke Jon Hassell’s “Fourth World” ethos, a music that morphs across time and tradition.
Park Jiha, piri, saenghwang, yanggeum, voice, glockenspiel
Dima El Sayed, poem, reading (track 3) 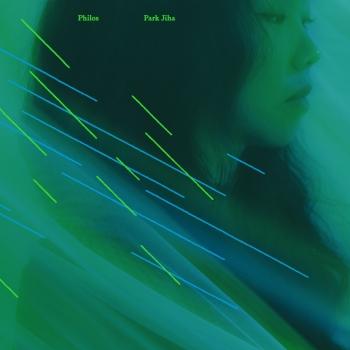 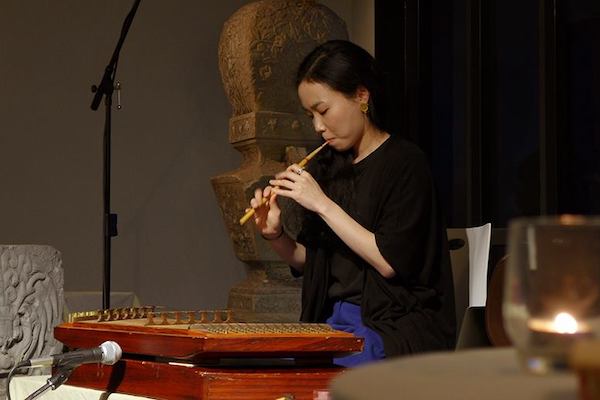 Park Jiha
grew up in a music friendly environment childhood. Music was the air she breathed in, a surrounding that her music-loving parents provided. Naturally, she had the opportunity be exposed to traditional Korean music and classical music. She learned flute earlier in the childhood and later piri, a traditional instrument as she went to Guk-ak school. From Guk-ak school to university, she got her education in traditional Korean music as well as majoring in piri and minoring in saenghwang.
Park Jiha officially started her career as a professional musician when she founded the group Sum after her graduation, wanting to form her own thoughts and sound into creative work. 숨[suːm]’s music, composed of various sounds found in traditional instruments and unorthodox musical structure, was an refreshing influence to Korean music scene. Those musics can be found in her first album ‘Rhythmic Space: A Pause for Breath’ in 2010, and second album ‘숨[suːm] 2nd’ in 2014. 숨[suːm] expanded its stage worldwide when it was selected as official showcase for a global music market, WOMEX. From 2013 to 2016, 숨[suːm] was invited to many music festival like WOMAD and SXSW and major European stage performances. Park Jiha became the up and coming Korean musician.
Outside 숨[suːm], Park Jiha has worked to expand her musical horizon. She was selected as a fellow for OneBeat program in the U.S. in 2013, experiencing different music and culture through musicians from various genres of music from different countries.
In 2015, Park Jiha held an autobiographical exhibition based on music and video of her own production which became the foundation of her EP album, ‘Park Jiha: A Record of Autobiographical Sounds’ that contains music and writings from the exhibition.
Park Jiha releases an solo debut album ‘Communion’ in her name in November 2016, leaving behind many years of working part of 숨[suːm] in pursue of new music. She collaborated with musicians from different genres like John Bell(vibraphone) and KimOki(bass clarinet, saxophone) to accomplish minimal, contemporary, and experimental music based on piri, saenghwang, and yanggeum. In the next year, Park Jiha was selected as a fellow for ‘RBMA Seoul(Red Bull Music Academy, Seoul)’ and as the official showcases of ‘Classical: NEXT’ and ‘WOMEX’ at the same time, proving to be an international artist who is receiving not only domestic but also international attention with her musical expansion.
Park Jiha have actively planned her next step on the global scene. Park Jiha signed a contract with Glitterbeat Records, a winner of the WOMEX 2017 Label Award. Thanks to the contract, her album Communion will celebrate its global distribution in March 2018.