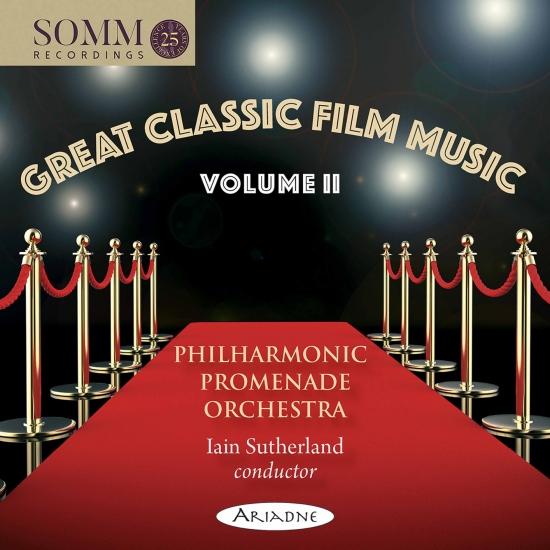 Lights, Camera, Action! as SOMM Recordings says Hooray for Hollywood with its second volume of Great Classic Film Music featuring the Scottish-born maestro Iain Sutherland directing the Philharmonic Promenade Orchestra of Hilversum. The first volume of Great Film Music (Ariadne 5006) was hailed by Classic FM for bringing together the finest music cinema has to offer and featured by John Brunning as his Drivetime Discovery. This second visit to the Golden Age of Hollywood and its unforgettable successors is taken from live and studio recordings from 1988-95. From the swashbuckling romance of Erich Wolfgang Korngolds The Sea Hawk to the sci-fi heroism of Jerry Goldsmiths Star Trek: The Next Generation. Cinema icons John Williams (Back to the Future), John Barry (You Only Live Twice), Maurice Jarre (Lawrence of Arabia) and Lalo Schifrin (The Eagle Has Landed) are heard alongside the late, great Ennio Morricones Gabriels Oboe (The Mission). Love and romance feature among the thrills and spills of Burton Lanes Finians Rainbow, Kurt Weills September Song, George Gershwins Funny Face, Robert Stolzs Spring Parade and Cole Porters sparkling songs in Evil Under the Sun. Two towering figures of the concert hall are also heard, with Elvira Madigans sublime borrowing from Mozarts Piano Concerto No.21 and rousing and lyrical themes befitting their Shakespearean settings by William Walton from the Laurence Olivier-starring and directed Richard III and Henry V.
“Sutherland plays the Richard III Prelude in particular with the sort of gravitas that it deserves – effectively, it’s a third Coronation March to match those Walton composed for George VI and Elizabeth II. The Death of Falstaff on the other hand, from the Henry V music, is suitably sentimental. After that and ‘Touch her soft lips and part’, also sentimental in the right way, we need to be sent off with a rousing tune – what better than the Lawrence of Arabia music which closes Volume II? Many of the performances on both these Somm albums were recorded live, but the quality of both live and studio sound is very good in these transfers.” (Brian Wilson, MusicWeb International)
Philharmonic Promenade Orchestra
Iain Sutherland, conductor 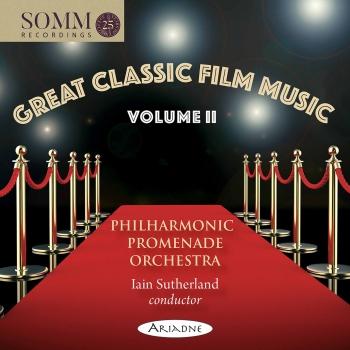 Iain Sutherland
has held the position of Principal Conductor with the BBC Radio Orchestra in London; City of Glasgow Philharmonic; BBC Scottish Radio Orchestra; National Symphony Orchestra of Scotland and the Midland Symphony Orchestra. From 1973 to 1987 he was the regular Guest Conductor of the BBC Concert Orchestra for BBC Radio 2's "Friday Night Is Music Night".
Iain Sutherland has worked with the London Symphony Orchestra, Royal Philharmonic Orchestra, Hallé Orchestra, English Chamber Orchestra, Royal Liverpool Philharmonic, Royal Scottish National Orchestra, National Symphony, Slovak Philharmonic, Graz Symphony, BRTN Philharmonic (Brussels), NDR Philharmonie (Hannover), Dessau Philharmonic, Brazilian National Symphony, Flemish Radio Philharmonic, Maribor Philharmonic and the Orchestras of BR (Munich), Münchner Rundfunk Orchester, SWF (Kaiserslautern), NRK (Oslo) and NOS (Hilversum) to name a few. His repertoire encompasses baroque, classical, romantic and contemporary works, as well as Viennese Operetta, Broadway and Hollywood and he has recorded numerous CDs.
Mr Sutherland is currently a director of the Performing Artists' Media Rights Association, has served as Warden of the Performers and Composers section of the ISM, on the Central Music Advisory Committee of the BBC, the Council of the British Academy of Composers and Songwriters and is on the Committee of the British Music Writers Council of the Musicians Union. He is a Companion of the Television and Radio Industries Club and a patron of the Young Person's Concert Foundation".