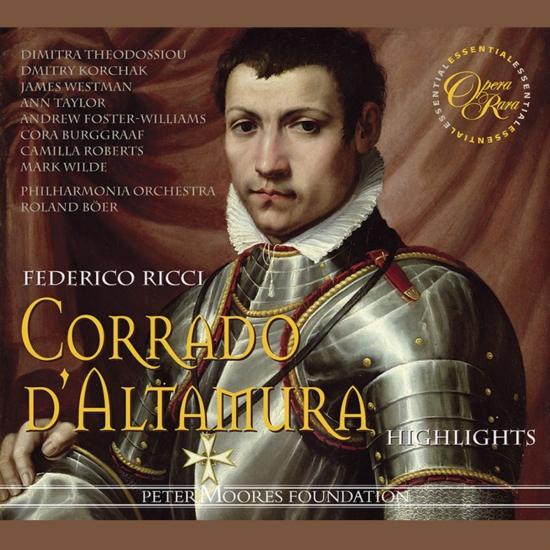 Frederico Ricci's Corrado d'Altamura is a dramma lirico that opened at La Scala in 1841. Set in 12-century Sicily, the highly dramatic plot tells of betrayal and then revenge between Roggero, the Duke of Agrigento and his former friend and tutor, Corrado, to whose daughter, Delizia, Roggero has promised marriage - only to break his vows. The great expert in 19th-century Italian opera Julian Budden thought Ricci's serious works 'are worthy to stand beside Mercadante's.' This is the sixth opera in the Essential Opera Rara series and, once again, a vivid impression of the work is captured on a single disc, accompanied by a complete libretto and article by the eminent 19th century scholar, Jeremy Commons.
„Still, this remains an exciting, unfairly neglected work, and on this disc of highlights it is very well served by Roland Böer’s sensitive conducting of the Philharmonia.“ (Opera, Eric Myers)
„The work's serious tone is indeed striking, from the dark, grave prelude to the spellbinding final scene. Ricci is capable of great complexity, including the interweaving of the voices with different instrumental lines in the orchestra and sophisticated large-scale structures. Jeremy Commons notes in his liner essay that the choice of ostinato figures in Ricci's score is unusually nuanced, as well as a sense of the theatrical. Listen to the trumpet blares, trombone scales and cymbal crashes at the start of the first-act finale to witness a composer with a forward-thinking attitude to vivid opera orchestration. There is such promise in the work that it's a shame that Ricci did not take his career further; all but one of his remaining operas, it seems, was unsuccessful at his premiere, and as we know, his works have all but sunk into oblivion.“
„Top marks here to Roland Böer and the Philharmonia Orchestra for providing a near-ideal accompaniment in this recording. There's such vitality about the playing that one would imagine the orchestra had the theatre in its blood, rather than spending most of its time in the concert hall. Böer's tempo choices tend to be sprightly but never rushed, and he breathes with his singers.“ (Musical Criticism, Dominic McHugh)
Dimitra Theodossiou, soprano
Dimitry Korchak, tenor
James Westman, baritone
Ann Taylor, mezzo-soprano
Andrew Foster-Williams, baritone
Cora Burggraaf, mezzo-soprano
Camilla Roberts, soprano
Mark Wilde, tenor
Geoffrey Mitchell Choir
Philharmonia Orchestra
Roland Böer, direction
Digitally remastered