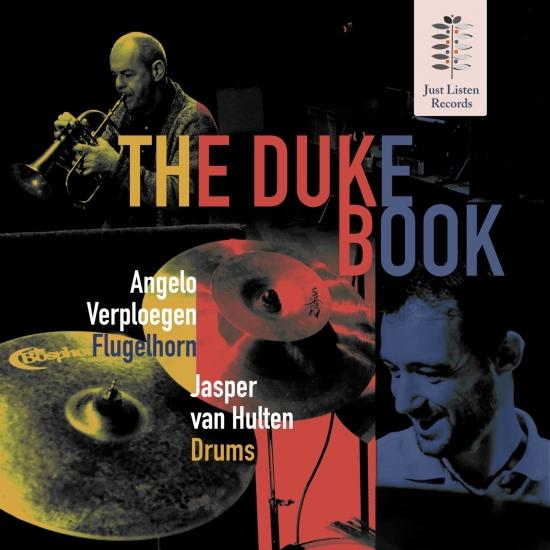 Info for The Duke Book

“The Duke Book” is an extensive dialogue between flugelhorn and drums, a configuration that as far as I know, is unique. The necessary duels have been fought between trumpet and percussion, but the tender flugelhorn has never entered this type of arena. In the hands of Verploegen it becomes a different instrument: the characteristic gentleness gets expanded with new fierceness.
Notice, for example, that perfectly placed high note in the beginning of the classic ‘Take The A Train’, a musical moment that sticks around for the entire song.
Wonderful to hear the musicians scan each other in the opener “Blues in Blueprint”. It is clear that a duo can dive into music a little deeper than a regular larger line-up. Van Hulten makes his percussion speak as if it is a melodic instrument. As a listener you are encouraged to play an active role: unnoticed you give your own musicality a place in between the game of the flugelhorn and the drums. Free as a bird you can spontaneously fantasize your own melodic lines.
The music of Duke Ellington and Billy Strayhorn is the theme of this production, with songs such as “Satin Doll”, “Come Sunday”, “Caravan”, “It Don’t Mean A Thing” and “Sophisticated Lady’. Well-known and appealing material that creates a framework for the improvisations by the duo.
Beautiful are also the “Interludes” between a number of tracks: more or less free pieces that form an organic connecting link. Ellington and Strayhorn are among the greatest tonal poets of the last century and their music has now become as established as Bach, Beethoven, Brahms and Debussy. Their themes with that typically romantic touch, form a recognizable handle for all listeners.
Until recently, the flugelhorn was more or less a poor child in jazz, but because of this new work, Verploegen and Van Hulten’s new album give the instrument an extra dimension: that from a not always gentle sky stormer. Verploegen says: “Jasper’s musical inception runs parallel to mine. Jasper is just like me a melodic thinker, someone who builds musical structures. We both like to take risks. Working with him is a delight. We recorded The Duke Book in Studio 1 in two days at Muziekcentrum van de Omroep, an almost ideal space with a natural reverb. The result felt good right away and actually everything went a lot easier than the last time at “The Sweetest Sound”. I also go on tour with Jasper, because many venues are interested in this project.”
The duo Angelo Verploegen & Jasper van Hulten has a golden future!
Angelo Verploegen, flugelhorn
Jasper van Hulten, drums 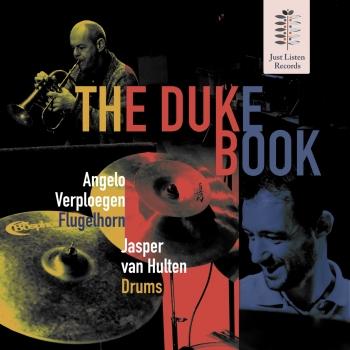 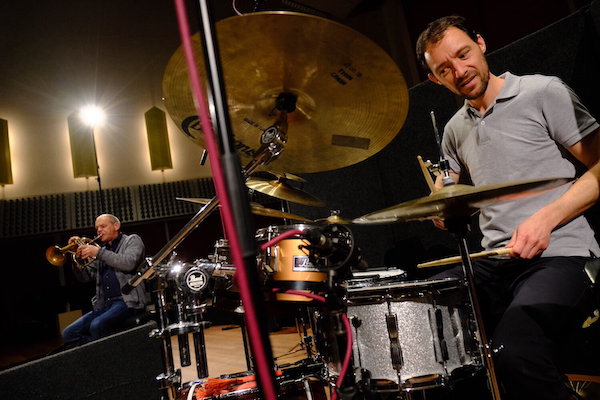 Angelo Verploegen
studied Musicology at the University of Amsterdam and trumpet at the Sweelinck Conservatory in Amsterdam. Since the end of the 80s, he has been very active with sextet The Houdini's (18 CDs; tours in Europe, USA, Canada, Australia; projects with Trijntje Oosterhuis, Amsterdam Sinfonietta, Schönberg Ensemble, Jacob ter Veldhuis). From the late 1990s onward, smaller groups were added, such as the trio Toïs (2 CDs; collaboration with Louis Andriesen, music for feature film Wilde Mossels) and the Amsterdam Jazz Trio (2 CDs; Japan tour). More recent solo projects are Executive Lounge (with Jeroen van Vliet, among others) and The Ballad Album, which was nominated for an Edison in 2012. He is also a frequent performer with the Metropole Orchestra and the Jazz Orchestra of the Concertgebouw and in smaller line-ups with Michiel Braam, Paul van Kemenade, Tony Overwater, Corrie van Binsbergen, Soo Cho and others. As a session musician, he has recorded with De Dijk, Frank Boeijen, Gino Vannelli, Venice, Stef Bos, Gerard van Maasakkers and many others. As a producer, Angelo worked with Benjamin Herman, Jesse van Ruller, Wolfert Brederode, Denise Jannah, Kenny Wheeler, Misha Mengelberg, Sven Ratzke. Photo Angelo by Cees van de Ven.
Jasper van Hulten
From an early age Jasper already showed a strong reaction to almost every sound, and he appeared to have a very good hearing. There was always a lot of music and instruments in the house. From the moment his dad gave him his first washing-powder-box-drumkit, his future was determined: from seven years old he starts taking drumlessons at the local music school.
Ten years later he is admitted to the Rotterdam Conservatory, where he graduates in 2002 as a bachelor in music. While studying drums and music, he starts building up his network on numerous jamsessions, and already plays frequently with numerous bands in various styles such as pop, jazz, latin-american, etc.
His professional career took off with a bands like “The Young Sinatras” and “Sensual”, playing on almost every jazz-festival in the Netherlands. Meanwhile, many other bands started to develop, giving Jasper the chance to gain a lot of experience and find his way in music. And also to grow as an all-round musician and record many albums, always approaching music with an open mind, looking for sound, harmony and unity.
Now his current bands include ‘Eric Vloeimans Gatecrash’ (electro-improvised music with one of Europe’s leading trumpetplayers) and Wouter Hamel, a dutch singer/songwriter. With these bands Jasper recorded award winning albums and is playing in clubs, theatres and festivals throughout the Netherlands and Europe, but also in Japan, south Korea, Indonesia, India, South-Africa, USA, etc.
Besides this, Jasper played with great musicians like Bert van den Brink, Harmen Fraanje, Michiel Borstlap, Jeroen van Vliet, Hein van de Geyn, Stefan Lievestro, Gulli Gudmundsson, Peter Tiehuis, Theo de Jong, Benjamin Herman, Anton Goudsmit, Ad Colen, Ilja Reijngoud, Fay Claassen, Jesse van Ruller, Angelo Verploegen, Colin Benders aka ‘Kyteman’, Dick de Graaf, Milan Bonger, Mete Erker, Tutu Puoane, Gino Vannelli, Wende Snijders, Denise Jannah, Edsilia Rombley, Deborah Carter, Lydia van Dam, Steve Swallow, Carla Bley, amongst many others

Booklet for The Duke Book