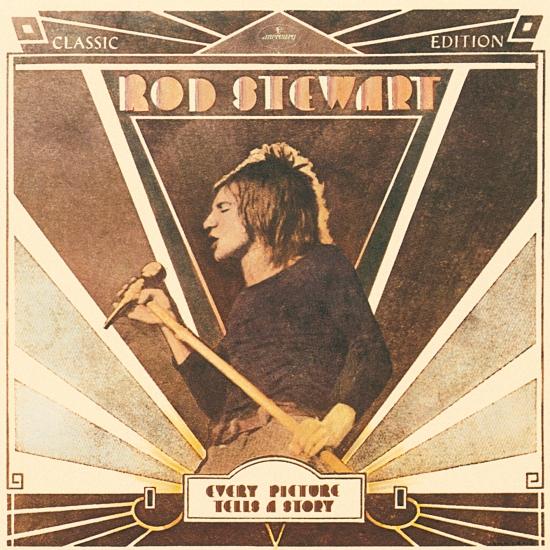 Info for Every Picture Tells A Story (Remastered)

The aesthetic Rod Stewart had been honing over his first three solo albums--an aesthetic that combined folk, hard rock, and R&B swagger--was perfected on „Every Picture Tells A Story“. The album's combination of strong, original songs and plum cover versions reveal the artist's range and versatility as he simultaneously paid tribute to mentors and declared his own craft.
Members of Stewart's regular group, the Faces, provide intuitive support, making nearly every track shine with passion and edge. Stewart's take-no-prisoners interpretation of the Temptations' '(I Know I'm) Losing You' brought new dimensions to a Tamla/Motown classic.
'Maggie May,' one of the great pop anthems, is the obvious standout, but the remaining selections, such as 'Mandolin Wind' and Tim Hardin's beautiful 'Reason To Believe,' have a similar sense of purpose. Through it all, of course, is Stewart's soulful, beautifully textured singing, which reaches its pinnacle on these performances, ensuring the artist's standing as one of rock's all-time greatest vocalists. If you buy only one Rod Stewart album, „Every Picture Tells A Story“ should be it.
'... he's got soul to spare... He's eloquent, literate, and moving: a superb writer... no better backing band in the biz at the moment...' (Rolling Stone)
'... the best thing he has... done on record...' (Rolling Stone)
Rod Stewart, vocals, acoustic guitar
Martin Quittenton, acoustic guitar
Ron Wood, guitar, pedal steel guitar, bass
Sam Mitchell, slide guitar
Dick Powell, violin
Pete Sears, piano
Ian McClagan, organ
Danny Thompson, organ
Andy Pyle, bass
Mick Waller, drums
Madeline Bell, background vocals
Mateus Rose, background vocals
John Baldry, background vocals
Digitally remastered
Ranked #172 on Rolling Stone's List of The 500 Greatest Albums of All Time

You're In My Heart: Rod Stewart (with The Royal Philharmonic Orchestra)

A Night On The Town

Every Picture Tells A Story (Remastered)

An Old Raincoat Won't Ever Let You Down

It Had To be You... The Great American Songbook