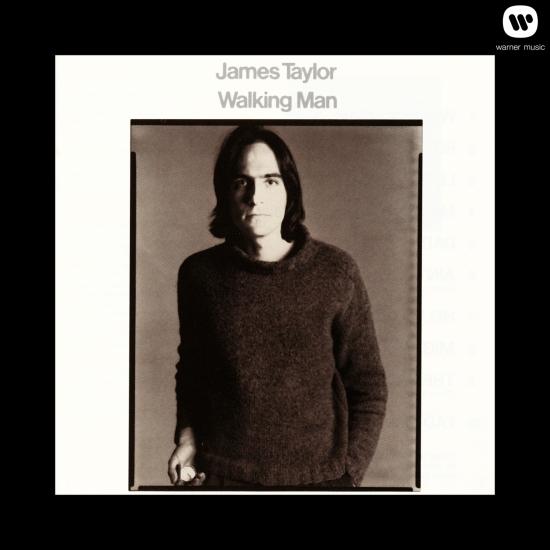 Walking Man, James Taylor's fifth album, released in 1974 finds him at a transitional period. This album is the first that has the contemporary JT feel to it, his sound and songwriting had matured. He still delivers the classic sound developed back in the Sweet Baby James era but the 'one man and his guitar' format has given way to heavier orchestration and use of a horn section that gives the general sound more of a bite. The production is precise and manicured and always features Taylor's unique guitar style and at the center of each song is Taylor's friendly, vulnerable voice.
James alternates between ballads with strings, ballads with horns and ballads with himself, as well as jazz and folk. There is a strong jazzy feeling on the whole album and sometimes, the jazz takes risky, surprising and beautiful turns. The title song 'Walking Man,' released as the album's first single stands today as an often reprised fan favorite. Also included is the tender lullaby 'Daddy's Baby,' written in honor of Taylor's newly born daughter. Taylor delivers Chuck Berry's 1964 hit, 'The Promised Land,' with understated fidelity and joining James on his most unabashed rock effort to date, 'Rock and Roll Is Music Now' is Carly Simon and Paul and Linda McCartney. Taylor has an understated way with a lyric but always hits his mark, which is the listener's heart.
'... an album of sure, truth-telling merit and no-apologies intensity.'
James Taylor, guitar, vocals
Kenny Ascher, keyboards
Don Grolnick, keyboards
Ralph Schuckett, keyboards
Paul McCartney, bass, backing vocals
Hugh McCracken, guitar, harmonica, backing vocals
Rick Marotta, drums
Ralph MacDonald, percussion
Andy Muson, bass
Linda McCartney, vocals
Gene Orloff, strings
George Marge, oboe
Kenny Berger, baritone saxophone
Michael Brecker, tenor saxophone
Randy Brecker, trumpet
Peter Gordon, french horn
Barry Rogers, trombone
Alan Rubin - trumpet
George Young, alto saxophone
Howard Johnson, tuba
Carly Simon, vocals
David Spinozza, guitar, music producer
Digitally remastered