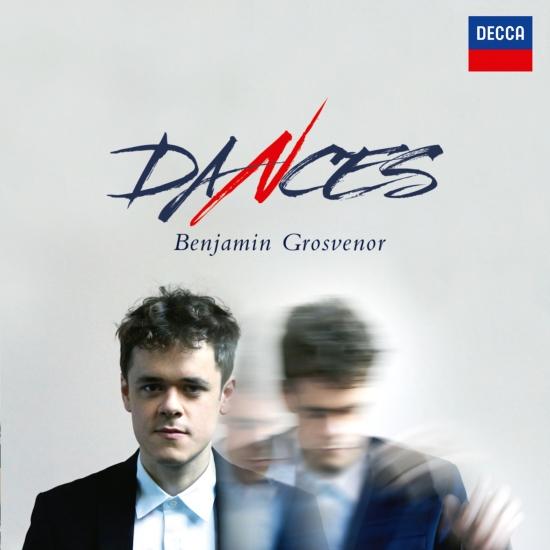 Dances is a dazzling display of solo works for piano from Bach to Boogie Woogie; via Chopin, Granados, Albeniz, Scriabin and the Blue Danube. For his second solo album on Decca, Benjamin Grosvenor has assembled a typically imaginative and appealing programme of piano music inspired by the dance form.
Shining the spotlight on the music of movement, this album was inspired by a letter from the great pianist-composer Ferruccio Busoni to his pupil Egon Petri proposing a “dance programme” as a theme for Petri’s recitals, a concept Grosvenor expanded on for his Queen Elizabeth Hall debut recital in 2012.
A former Gramophone Young Artist of the Year, Grosvenor will appearing at two BBC Proms in 2014 with a performance of Chopin’s First Piano Concerto with the BBC Philharmonic Orchestra (8th August), followed by a solo recital at Cadogan Hall (1st September). In 2011, he was awarded the honour of opening the BBC Proms Concerts season and was the youngest-ever soloist to perform on the ‘First Night’.
Benjamin Grosvenor, piano

Benjamin Grosvenor - Piano
Nineteen year old British pianist Benjamin Grosvenor is internationally recognized for his electrifying performances and penetrating interpretations. An exquisite technique and ingenious flair for tonal colour are the hallmarks which make Benjamin Grosvenor one of the most sought-after young pianists in the world. His virtuosic command over the most strenuous technical complexities never compromises the formidable depth and intelligence of his interpretations. Described by some as a ‘Golden Age’ pianist (American Record Guide) and one ‘almost from another age’ (The Times), Benjamin is renowned for his distinctive sound, described as ‘poetic and gently ironic, brilliant yet clear-minded, intelligent but not without humour, all translated through a beautifully clear and singing touch’ (The Independent).
Benjamin first came to prominence as the outstanding winner of the Keyboard Final of the 2004 BBC Young Musician Competition at the age of eleven. Since then, Benjamin has become an internationally regarded pianist performing concerti with orchestras including the London Philharmonic, Tokyo Symphony, and Brazilian Symphony in venues such as the Royal Festival Hall, Barbican, Muza Kawasaki and Carnegie Hall (at the age of thirteen). In 2011, having just turned nineteen, Benjamin performed with the BBC Symphony Orchestra on the First Night of the BBC Proms to a sold-out Royal Albert Hall. His performance of Liszt’s Piano Concerto No. 2 dazzled critics, with The Times commenting on ‘the clarity and poetry of his panache, the airy grace of his arpeggios, the lack of flash buckles and bows'. Benjamin works with numerous esteemed conductors including Vladimir Ashkenazy, Jiří Bělohlávek and Vladimir Jurowski.
An accomplished recitalist, Benjamin performs to acclaim across the world. A regular at the Wigmore Hall in London, he has also made recital debuts at venues including the Victoria Hall in Singapore and the Philia Hall in Tokyo. In the USA, Benjamin has appeared at the Gilmore Festival and is a favourite in Saint Paul at the Chopin Society in Minnesota. Benjamin has recently given a highly successful fifteen-concert tour across Germany, for which he was labelled a ‘piano visionary’ by the Süddeutschen Zeitung. Benjamin continues to work chamber music collaborations into his busy schedule and enjoys working with other members of the BBC New Generation Artists scheme, of which he is a member during 2010-2012. Highlights of this season include engagements with the RAI Torino and Semyon Bychkov, Singapore Symphony and Okko Kamu, an extensive tour to North America including appearances in Washington and New York, and recital debuts in Berlin and Prague. In 2011/12 Benjamin is Associate Artist with Orchestra of the Swan.
In 2011 Benjamin signed to Decca Classics, and in doing so has become the youngest British musician ever to sign to the label, and the first British pianist to sign to the label in almost 60 years. His first recording for Decca includes Chopin’s Four Scherzi and Ravel’s Gaspard de la Nuit. Critics have marvelled at Benjamin’s musical character as displayed in this recording; ‘Grosvenor, you can tell, is a Romantic pianist, almost from another age. He doesn't deconstruct, or stand at a distance. He jumps inside the music's soul’ (The Times) and ‘Grosvenor's balance of oratory and ornament, gesture and poetry – evident, too, in Ravel's Gaspard de la nuit – are moving as well as impressive’ (The Observer). Benjamin’s previous recordings include Chopin rarities for the 200th anniversary edition of Chopin’s complete works (EMI, 2010) in which he was lauded for his ‘sensitivity of touch, general musicality and affection for the music’ (BBC Music Magazine) and a debut solo recording ‘This and That’ (Bowers & Wilkins Society of Sound/EMI, 2008), in response to which Bryce Morrison remarked that ‘even the most outlandish difficulties are tossed aside not just as child’s play but with a seemingly endless poetic finesse and resource’ (Gramophone). During his brief but sensational career to date, Benjamin has been featured in two BBC television documentaries, and his performances have been broadcast widely across the world.
The youngest of five brothers, Benjamin Grosvenor began playing the piano aged 6. He currently studies with Christopher Elton at the Royal Academy of Music on an affiliated scholarship and has also studied with Leif Ove Andsnes, Stephen Hough, and Arnaldo Cohen amongst others.