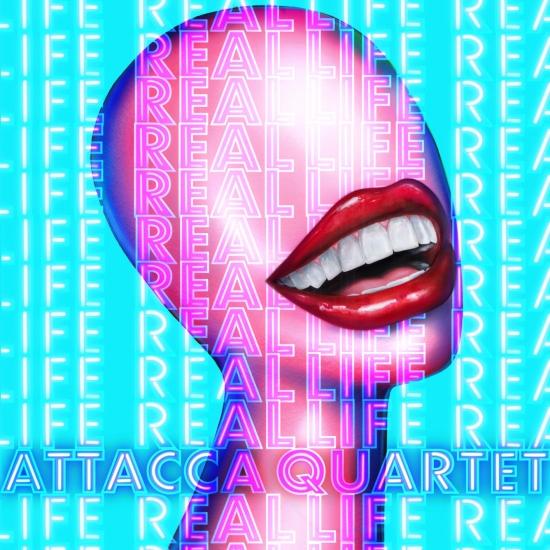 Sony Classical announce the exclusive signing of the bold, multi-genre, Grammy Award-winning string ensemble, ATTACCA QUARTET, with the release of two albums this year that embody their redefinition of what a string quartet can be. Real Life, a vibrant album that transcends musical boundaries, is out July 9th and available now for preorder. The group’s momentum will continue well into 2021, lining up a second album later this year featuring music by Philip Glass, Arvo Pärt as well as several Renaissance composers – details coming soon.
Melding the worlds of classical and electronic on the forthcoming album, REAL LIFE, today, the Attacca Quartet premiere the album’s lead single and video "Electric Pow Wow Drum.” A powerfully euphoric take on The Halluci Nation’s fan-favorite anthem, the string collective reimagines the track with regal strings wrapped around a tribal stomp – listen and watch the video here.
For Real Life, Attacca Quartet notably worked in the studio with Grammy Award-winning composer, multi-instrumentalist, producer, and Snarky Puppy bandleader Michael League. On the album, the group—Domenic Salerni [violinist], Amy Schroeder [violinist], Nathan Schram [violist], and Andrew Yee [cellist]—re-envision, reshape, and reimagine tracks originally recorded by some of today’s most influential artists in electronic music, including Flying Lotus, Squarepusher, Louis Cole, Anne Müller, Daedelus, and Mid-Air Thief. Many of these producers, as well as guest collaborator TOKiMONSTA, in turn, contributed new layers to Attacca Quartet’s interpretations. Emphasizing the ability to perform all the tracks live as a four-piece, they implemented distortion, plucked and scraped the strings, tapped, and went so far as to reverse the tape itself.
“We thought about what the dream album could be that we hadn’t been able to make until we got this opportunity” says Schram, “and this idea just started to flower; to bring all the different electronic music we listen to, into our string quartet world and to collaborate with a lot of different musicians, particularly Mike League, while using all the possibilities of music technology to make the biggest string quartet album we could. We all dug really deep into our interests and abilities and created an amazing, experimental, rocking, touching album that is Real Life.”
Attacca Quartet manage to perfect the confluence of classical and electronic with all of the magic of both respective halves intact on Real Life. The musicians intimately amplify the emotional resonances of Flying Lotus’s “Remind U” by weaving in cinematic violin as TOKiMONSTA adds her quintessential club beats and samples. Then, on “Drifting Circles,” they take Anne Müller’s template and widen the scope with wintry violin bouncing off the icy production. Additionally, they serve up two brand new bespoke tracks, namely “Xetaka 1” (feat. Squarepusher) written by Squarepusher and “Holding Breadth” (feat. Daedelus) by Daedelus. Full tracklist below.
“It’s a celebration of collaboration, and how technology can increase human connection,” says Salerni of Real Life.
“What with today’s opportunities for mixing art forms, mixing genres and expanding the horizons of classical music in composition and in playing - it’s a really exciting time to be a musician.” explains Schroeder.
“We never think: ‘Can we do it?’,” exclaims Yee. “We just want to do it, and so we give ourselves the goal.”
On Real Life, Attacca Quartet most certainly accomplish that goal of successfully blending musical worlds and breaking down barriers of genre, in the process creating an imitable sound all their own. For Attacca Quartet, they’re only just beginning their music exploration.
“The Attacca Quartet uniquely combine infinite creativity with uncompromising quality,” says Per Hauber, President of Sony Classical, of the exclusive signing. “The first two projects for this year already promise to be very exciting. Everyone at the label is extremely enthusiastic and, we look forward to working with them!”
“We’ve always loved to dream big and imagine the grandest expressions a string quartet can make,”says Attacca Quartet. “Partnering with Sony Classical has inspired us to think even bigger than before and to fully realize our dreams, both our most personal statements and most outlandish.”
Attacca Quartet 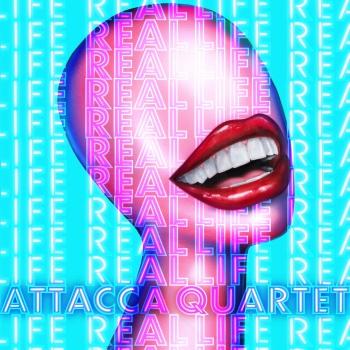 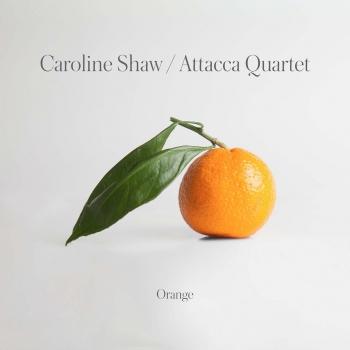 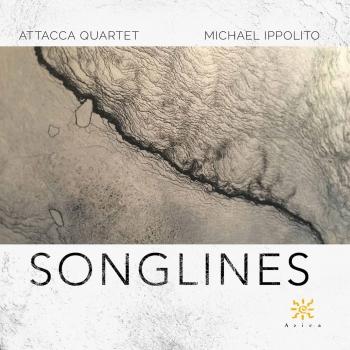 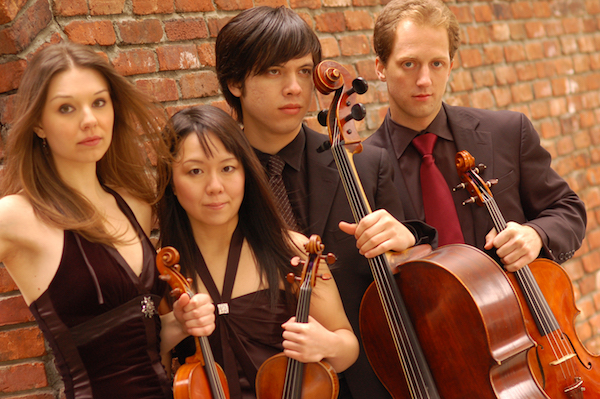 Attacca Quartet
First prize winners in the 7th Osaka International Chamber Music Competition in 2011, top prize winners and Listeners’ Choice award recipients in the 2011 Melbourne International Chamber Music Competition, and winners of the Alice Coleman Grand Prize in the 60th annual Coleman Chamber Ensemble Competition in 2006, the internationally acclaimed Attacca Quartet has become one of America’s premier young performing ensembles. Praised by The Strad for possessing “maturity beyond its members’ years,” they were formed at the Juilliard School in 2003 and made their professional debut in 2007 as part of the Artists International Winners Series in Carnegie Hall’s Weill Recital Hall. From 2011-2013 they served as the Juilliard Graduate Resident String Quartet, and for the 2014-2015 season they were selected as the Quartet in Residence by the Metropolitan Museum of Art in New York.
The Attacca Quartet recently completed a recording project of Haydn’s masterwork “The Seven Last Words of Christ on the Cross,” arranged by Andrew Yee and the Attacca Quartet. In his review for Gramophone, Donald Rosenberg wrote, “The Attacca Quartet explore the work’s range of expressive moods with utmost sensitivity to nuance and interplay .... They triumph in every respect, and are captured in such vivid sound that no telling Haydn detail is allowed to go unheard.” Thewholenote.com wrote, “It’s easily the most satisfying string version of the work that I’ve heard.”
In 2013, the quartet released the complete works for string quartet by John Adams on Azica Records. It was praised by Steve Smith of The New York Times as a “vivacious, compelling set,” describing the Attacca Quartet’s playing as “exuberant, funky, and … exactingly nuanced.” The Boston Globe also praised the release, stating, “Few [recent recordings] are as consequential as ‘Fellow Traveler,’ … superb performances.” The album was the recipient of the 2013 National Federation of Music Clubs Centennial Chamber Music Award. The quartet has been honored with both the Arthur Foote Award from the Harvard Musical Association and the Lotos Prize in the Arts from the Stecher and Horowitz Foundation.
The 2016-2017 season began with a bang as the Attacca Quartet opened for rock superstar Jeff Lynne’s ELO in two sold-out Radio City Music Hall performances. In addition, the quartet will be launching their new “Recently Added” series (first announced in a New York Times feature about the completion of their six-year traversal of all of Haydn’s 68 string quartets). The new project is dedicated to living composers who they feel have added significantly to the string quartet canon. The first season is taking place at Brooklyn's National Sawdust and features the music of Caroline Shaw, Michael Ippolito and John Adams. At the same time, the Attacca will present an ongoing series at Trinity Lutheran Church in Manhattan entitled “Based on Beethoven,” featuring performances of the complete Beethoven string quartets, paired with works inspired by Beethoven from the “Recently Added” series. The group will serve as the inaugural Ensemble-in-Residence at the School of Music at Texas State University during the 2016-2017 season and will appear in concerts and master classes throughout the United States and South America.
The Attacca Quartet has engaged in extensive educational and community outreach projects, serving as guest artists and teaching fellows at the Lincoln Center Institute, the Boston University Tanglewood Institute, Vivace String Camp in New York, the Woodlands ChamberFest in Texas, Virginia Arts Festival, Bravo! Vail Valley and Animato Summer Music Camp at Florida International University in Miami. Since 2006, they have performed in yearly benefit concerts supporting the Parkinson’s Disease Foundation’s efforts. The members of the Attacca Quartet currently reside in New York City. They are represented by Baker Artists, LLC.