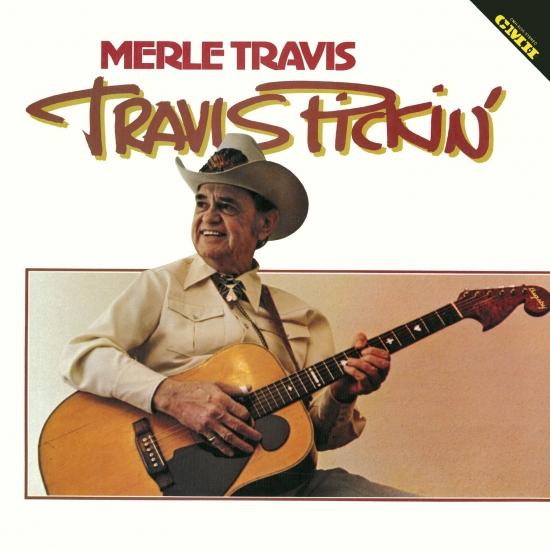 Though Merle Travis is known for his brilliant songwriting and fine singing, it is still his guitar playing that remains his most enduring contribution to American music. The syncopated ring of his signature fingerpicking style has gone far beyond the Kentucky coal country where he first heard it as a boy. His earliest recordings were much like the ones included on this album, simple solo acoustic instrumentals later termed, “Travis Pickin’”. It is with an acoustic guitar that the essence of Travis Pickin’ can best be appreciated. Unamplified and unaccompanied in the way Merle first heard the technique played. Every bit of music comes from the hands, the guitar, and the soul of the master, Merle Travis.
Merle Travis, guitar
Digitally remastered 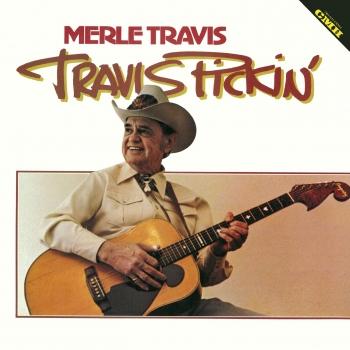 Merle Travis
A singer and songwriter of major proportions and guitar stylist of monumental influence, Merle Travis also proved himself adept as an actor, author and even cartoonist. A unique stylist, he was respected and prominent enough to have the instrumental style, ‘Travis picking,’ named after him. As a songwriter, he was just as successful and influential, being responsible for such classic songs as Sixteen Tons, Dark As A Dungeon, Divorce Me C.O.D., So Round, So Firm, So Fully Packed and Smoke! Smoke! Smoke! He was also highly regarded as a folklorist through his concept albums FOLK SONGS OF THE HILLS and SONGS OF THE COAL MINES. He is credited with devising the first solid body electric guitar, coming up with a model, which, when perfected by Leo Fender, would become a key element in early rock’n’roll. Along with a reputation as one of country music’s top guitarists, Travis also had a reputation for his wild behaviour, especially when he drank. He was arrested more than once for public intoxication and drunk driving on his motorcycle. In 1956 there was a highly publicised report of police surrounding his home after he assaulted his wife. Then, during the early 1960s, he was hospitalised briefly after being arrested while driving under the influence of narcotics.
Merle Robert Travis was born on November 29, 1917, in Rosewood, Muhlenberg County, Kentucky. His father was a coalminer, and the family lived on the bare edge of poverty. His very first instrument was a five-string banjo, but when he was twelve years old, his older brother gave him a homemade guitar. He learned the basics of his celebrated guitar style from Mose Rager, who played in a unique three-finger style he had picked up from black railroad worker, fiddle and guitarist Arnold Shultz. A near neighbour was Ike Everly, another proficient local guitarist and later the father of Don & Phil, The Everly Brothers. Merle adapted the finger-style to a degree of complexity in a repertoire that included blues, ragtime, and popular tunes. It wasn’t enough to earn a living, and he survived by working in the Civilian Conservation Corps as a teenager. While visiting his brother in Evansville, Indiana, in 1935, he entertained at a local dance, resulting in membership of local bands and a chance to appear on a local radio station. By 1937, he was a member of Clayton McMichen’s Georgia Wildcats, and a year later he had joined The Drifting Pioneers and was performing regularly on Cincinnati’s Boone County Jamboree radio show. It was also at this time that he started playing with Grandpa Jones and The Delmore Brothers in a gospel quartet called The Browns Ferry Four. A little later he teamed with Jones as The Shepherd Brothers, and they became the first act signed to the newly-founded King Records in 1943.
After a stint in the Marines, Travis returned to Cincinnati briefly before moving to Los Angeles, where he began making appearances in B-western movies and playing gigs with Ray Whitley’s Western Swing Band. He was signed to Capitol Records in 1946, making the top ten that summer with both No Vacancy and Cincinnati Lou. It was at this time that he put together a concept series of 78-rpm discs, FOLK SONGS OF THE HILLS, which was intended to cash-in on Burl Ives’ successful folk recordings. Released in 1947, the series failed to make an impact, though two of the songs, Dark As A Dungeon and Sixteen Tons, did receive some limited radio play. Travis was enjoying success though. In addition to writing the million selling hit Smoke! Smoke! Smoke! for Tex Williams, he had a half dozen top ten records himself, including Divorce Me C.O.D. and So Round, So Firm, So Fully Packed, which were both country chart-toppers for him. He failed to chart in the early 1950s, but his career was still on the upward trend. He was a regular on both the Hometown Jamboree and Town Hall Party television shows and he landed a starring role in the movie From Here To Eternity.
He released a series of influential guitar instrumental records and undertook a lot of session work, notably on Hank Thompson and Tex Ritter recordings. He was credited on the 1955 Hank Thompson hit of Wildwood Flower. That same year Tennessee Ernie Ford had a massive pop-country hit with Merle’s Sixteen Tons. Throughout the rest of the 1950s and early 1960s, fellow musicians such as Chet Atkins, Scotty Moore, The Everly Brothers all referred to Travis as a major influence, but few of the general public had ever heard of him. He was eventually ‘discovered’ by the urban folk revival of the early 1960s, and made several festival appearances. Capitol Records reissued several of his older classics and for a time he moved to Nashville. He did some recordings with Joe Maphis and Johnny Bond (a brilliant collection of Delmore Brothers songs), and made a brief return to the charts in 1966 with John Henry Jr. a track from his acclaimed SONGS OF THE COAL MINES album. In 1974 he got together with Chet Atkins for the ATKINS-TRAVIS TRAVELLING SHOW, which won a Grammy for Best Country Instrumental Performance. Throughout the 1970s, having moved to Oklahoma, he played the odd college folk dates and undertook occasional recordings for CMH Records, re-cutting many of his older tunes and also making a tribute album to Clayton McMichen with Mac Wiseman. By this time, he had settled down with wife number four, but his years of contentment were to be short-lived as he suffered a fatal heart attack on October 20, 1983. His son, multi-instrumentalist Thom Bresh, has continued to keep his father’s music alive. Both Doc Watson and Chet Atkins named sons after him. (alancackett.com)