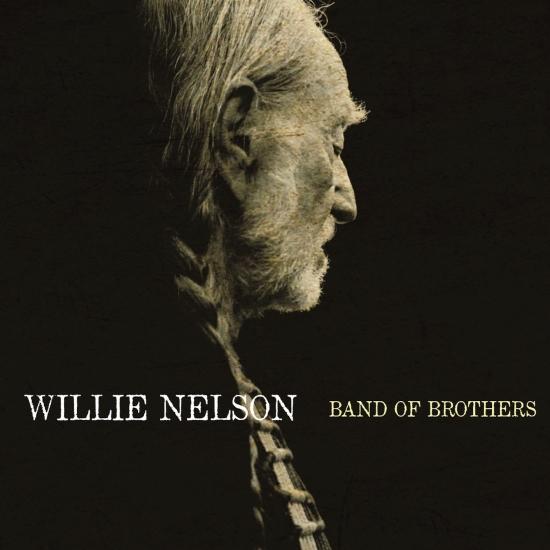 Info for Band of Brothers

Legacy Recordings is proud to announce the release of Band of Brothers, the new Willie Nelson studio album premiering 14 performances including nine brand-new songs composed by America’s quintessential pop/country songwriter.
The much-anticipated successor To All The Girls… (which became Willie’s first Top 10 album in more than three decades when it was released in October 2013) Band of Brothers is the artist’s first album of predominately new original material in nearly two decades, debuting the master tunesmith’s first major batch of newly-penned songs since his Spirit album in 1996. ”I got on kind of a writing kick,” Willie Nelson said recently, ”it’s good to be writing again.”
The influential songwriter–whose early successes brought pop and country together with unforgettable standards like “Crazy” (Patsy Cline), “Hello Walls” (Faron Young), “Funny How Time Slips Away” (Billy Walker), “Night Life” (Ray Price) and many others–has added nine new essential songs to his classic catalog. One of Willie’s most personal albums to-date, the songs onBand of Brothers range from the introspective (“The Wall” and “Send Me a Picture”) to the rollicking (“Wives and Girlfriends” and “Used To Her”).
A new video for “The Wall,” one of the key tracks on Band of Brothers, debuted exclusively on RollingStone.com. ”The Wall” audio track will be available at all digital stores beginning Tuesday, May 6 and will be available for immediate download for fans who pre-order Band of Brothers.
Rounding out the album are five songs, penned by others, which compliment and unite the album’s sonic textures and lyric themes. Included are Willie’s interpretations of Vince Gill’s Whenever You Come Around”, Billy Joe Shaver’s ”The Git Go” (a duet with Jamey Johnson) and the appropriately-titled “Songwriter,” written by Gordie Sampson and Bill Anderson.
All 14 tracks on Band of Brothers are new recordings and none of the songs have been previously recorded by Willie Nelson.
Working again with producer Buddy Cannon, who helmed Willie’s first three Legacy releases, and a band featuring Jim “Moose” Brown (keyboards), Eddie Bayers (drums), Kevin “Swine” Grantt (bass), Bobby Terry (guitar), Tommy White (steel guitar), Mickey Raphael (harmonica) and Trigger (Willie’s guitar), Willie Nelson recorded the bulk of Band of Brothers during sessions at Sound Emporium Studios in Nashville with additional recording at Pedernales Studio, Austin, Texas and The Hit Factory Criteria, Miami, Florida. Recording sessions took place between October 2013 and March 2014.
Produced by Buddy Cannon

Ride Me Back Home

The Sound In Your Mind (Remastered)

Country Willie - His Own Songs

Willie Nelson
With a six-decade career and a catalog of more than 200 albums to his credit, the iconic Texas singer-songwriter Willie Nelsonhas earned a permanent position in pop music’s pantheon with songs combining the sophistication of Tin Pan Alley with the rough-and-tumble grit and emotional honesty of country music. He brought pop and country together on the radio in the early 1960s with unforgettable songs like “Crazy” (Patsy Cline), “Hello Walls” (Faron Young), “Funny How Time Slips Away” (Billy Walker), “Night Life” (Ray Price) and others and, by the mid-1970s, had become a superstar in his own right as a prime mover of a revolutionary and thriving outlaw country music scene. The Red Headed Stranger, Willie’s first album for Columbia Records in 1975, catapulted the artist to the front ranks of popularity, making his a name familiar in country and city households across America and around-the-world.
A seven-time Grammy Award winner, Willie Nelson has received numerous accolades including American Music Awards, Academy of Country Music Awards, Country Music Association Awards and others. He is a co-founder of Farm Aid, an annual series of fundraising events which began as an all-star benefit concert in 1985 to raise money for American family farmers. He continues to lobby against horse slaughter and produces his own blend of biodiesel fuel. An old-school road-dog troubadour with new school wheels, Willie plays concerts year-round, tirelessly touring on Honeysuckle Rose III (he rode his first two buses into the ground), taking his music and fans to places that are always worth the ride.
The very first musician to perform on the premiere episode of Austin City Limits in 1974, Willie Nelson was inducted into the inaugural class of the Austin City Limits Hall of Fame by fellow Texan Matthew McConaughey on Saturday, April 26, 2014. “There would be no Austin City Limits without Willie Nelson,” McConaughey told the audience assembled at the University of Texas at Austin, the original home of what is now America’s longest-running televised music program.
Willie Nelson, who turned 81 on April 29/April 30, is an American original, a sublime singer, master tunesmith and outlaw country’s most enduring archetype.