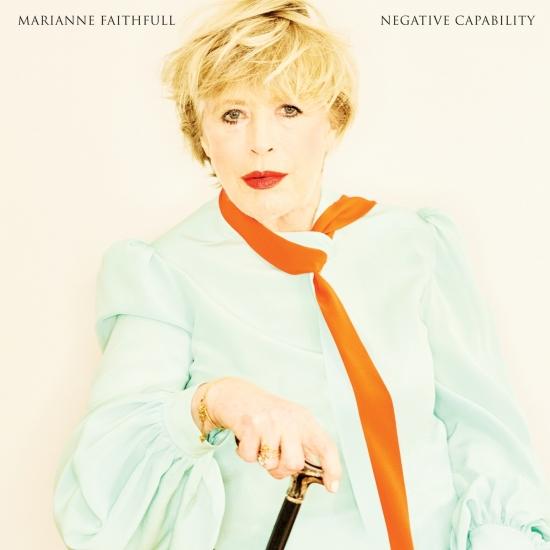 Negative Capability is Marianne Faithfull’s 21st album and the most emotionally powerful of her 54-year recording career. Facing down arthritis and bolstered by collaborators including Warren Ellis, Nick Cave, Rob Ellis, Ed Harcourt and Mark Lanegan, Negative Capability is charged with brutal honesty and autobiographical reflection as she addresses losing old friends, her loneliness living in her adopted city of Paris yet still hopes love can come around.
Marianne Faithfull is a great musical survivor. She went from pure-voiced chanteuse of "As Tears Go By" to emblem of 1960s drug excess before re-emerging in 1979 with "Broken English," a soul-baring blast of an album that still packs a punch.
Since then, Faithfull has matured into a diva of melancholy, her expressive voice roughened and deepened by time and life. "Negative Capability," the 71-year-old singer's 21st album, is a moving, quietly majestic collection of songs dwelling on aging, pain, loss and loneliness — hardly the usual rock 'n' roll fare.
Faithfull is chief lyricist, working with musical collaborators including Mark Lanegan, Ed Harcourt and Nick Cave, who co-wrote, plays piano and sings on the single "The Gypsy Faerie Queen," a midsummer night's meditation inspired by Shakespearean mysticism.
Faithfull and her producers, Rob Ellis and Warren Ellis (one of Cave's Bad Seeds), have crafted a suite of tuneful, autumnal, tentatively hopeful songs, with simple, effective arrangements driven by acoustic guitar, meditative piano and somber strings.
Collectively, they work a mournful magic. Faithfull brings an ominous touch to Bob Dylan's "It's All Over Now, Baby Blue" and revisits two of her own songs: the Rolling Stones-penned "As Tears Go By," which grows more poignant with age, and the mesmeric "Witches' Song" from "Broken English."
"Born to Live," written for the late Anita Pallenberg, wishes for "a good death," while "Don't Go" mourns another departed friend, Martin Stone.
"They Come at Night" is a bleak response to the 2015 attacks in Faithfull's adopted home city of Paris, while "No Moon in Paris" finds loneliness, rather than love, in the City of Light.
But it's not all darkness. Faithfull's indomitable spirit seeks more — more life, more hope, more love.
"In My Own Particular Way" offers a wry self-appraisal: "I know I'm not young and I'm damaged/But I'm still pretty, kind and funny." And, declares Faithfull: "I'm ready to love."
Marianne Faithfull, vocals
Produced by Rob Ellis, Warren Ellis 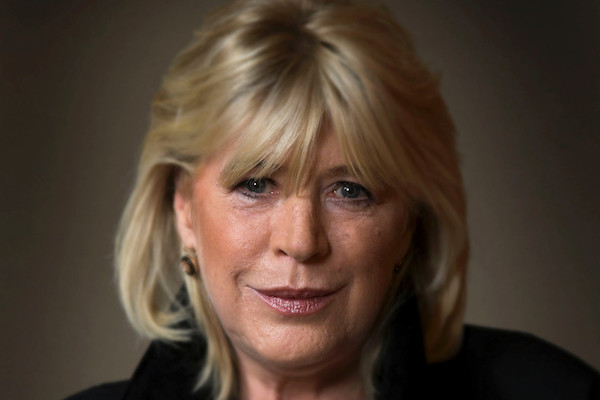 Marianne Faithfull
A beautiful and articulate individual in the London scene of the 1960s, Marianne Faithfull was the product of her unusual background as the convent school-educated daughter of an English MI6 spy father and dancer mother from the Austro-Hungarian von Sacher-Masoch family.
Spotted, in 1964 at the age of 17, by The Rolling Stones’ manager Andrew Loog Oldham and finding herself only three months later a Top 10 pop star with her evocative reading of Jagger/Richards’ As Tears Go By – she has lived a wholly eventful life and produced a wide and varied catalogue of albums.
Beginning with the wistful folk and baroque pop of her mid-1960s work, Marianne ventured into darker territory in 1969 with Sister Morphine, a classic collaboration with Jagger/Richards which (as the b-side of her Something Better single) caused something of a controversy. Misinterpreted as a pro-drug song – when in reality it imagined a man in hospital dying after a car crash – the record was pulled from record shop shelves after two days.
The incident was emblematic of the way the newspapers unfairly vilified Marianne after the infamous bust at Keith Richards’ Redlands home in 1967. Hounded and cornered by the media, she admits now that she took solace in heroin, mistaking William Burroughs’ The Naked Lunch as something of a guide for life. “I took it absolutely for real,” Marianne laughs. “Later William said to me, ‘Marianne…that was fiction. It was not meant to be taken as a textbook of life and certainly not by you.’ I said, ‘Oh…’”
After a painful 1970s in which Marianne’s career was derailed by her personal difficulties, the singer made a spectacular return with her post-punk masterpiece, Broken English in 1979. Veering from the heartbreaking The Ballad Of Lucy Jordan to the enraged neo-reggae outbursts of Why D’Ya Do It, it was an album which found Marianne painting herself entirely in her own light and seizing absolute control of her creativity. Broken English was also the first Marianne Faithfull album to showcase her changed voice, which was variously described as “whisky-soaked” and “nicotine-stained”. In the wake of Broken English there followed a series of albums with standouts almost too numerous to list: the torch songs of experience that made up Strange Weather (1987), the dreamlike sonic scapes of the Angelo Badalamenti-produced A Secret Life (1995), the dramatic, masterful tribute to Kurt Weill in The Seven Deadly Sins (1998). Post the millennium, Marianne has worked with a new generation of artists to achieve her creative vision, including Beck, Jarvis Cocker and Billy Corgan on 2002’s Kissin Time, Damon Albarn, Nick Cave and PJ Harvey on 2005’s Before The Poison, and Antony Hegarty and Rufus Wainwright on Easy Come Easy Go in 2008. 2011’s Horses And High Heels was a stirring set of songs overseen by her friend and longstanding collaborator, US producer Hal Willner.
In 2014, the 50th anniversary of the beginning of her recording career, Marianne released Give My Love To London. Produced by Rob Ellis and Dimitri Tikovoi and mixed by Flood, it featured an impressive roll call of studio collaborators including Adrian Utley (Portishead), Brian Eno, Ed Harcourt and Warren Ellis & Jim Sclavunos (The Bad Seeds). Songwriting contributors and co-conspirators – with Marianne penning the majority of the lyrics – include Nick Cave, Roger Waters, Steve Earle, Tom McRae and Anna Calvi.
Give My Love To London was all the more extraordinary given that it was written in the aftermath of an accident Marianne suffered in summer 2013 in Los Angeles, breaking her sacrum bone in four places. As a result, she found herself laid up for six months recovering in Paris, with little else to do but write songs, giving her the longest period of pre-production she has enjoyed for any of her albums. Once the album was recorded Marianne took a short holiday, during which she fractured her hip resulting in emergency surgery….and a prolonged recovery due to theatre-induced infection. Despite the health complications Marianne returned to the stage for a world tour and was the subject of a luxury photo book Marianne Faithfull: A Life On Record edited by herself and Francois Ravard, published by Rizzoli, featuring iconic images of the singer by major photographers including Helmut Newton, David Bailey, Ellen Von Unwerth, Bruce Weber, Cecil Beaton and Robert Mapplethorpe.
‘Negative Capability’ is Marianne Faithfull’s 21st album and the most emotionally powerful of her 54-year recording career. Facing down arthritis and bolstered by collaborators including Warren Ellis, Nick Cave, Rob Ellis, Ed Harcourt and Mark Lanegan, ‘Negative Capability’ is charged with brutal honesty and autobiographical reflection as she addresses losing old friends, her loneliness living in her adopted city of Paris, and love.
Driven by her supernatural reinterpretative skills, florid lyricism, battle against the pain she lives with, and realised with her stellar group of musicians at La Frette studios near Paris, ‘Negative Capability’ is Marianne’s unflinchingly honest and relentlessly beautiful late-life masterpiece. The stark emotional heft, exquisitely framed by ornately sensitive musical backdrops can only be likened to the late-life works by Johnny Cash or Leonard Cohen.
Remarkably, at the same time as her music career, down the years Marianne Faithfull has enjoyed a parallel career as an actress, stretching from her 1967 debut in Chekhov’s Three Sisters and her acclaimed and haunting portrayal of Ophelia in Hamlet, through films including The Girl On The Motorcycle, Lucifer Rising, Marie Antoinette and Irina Palm. In addition, she has produced two candid, riveting autobiographies, Faithfull and Memories, Dreams and Reflections.