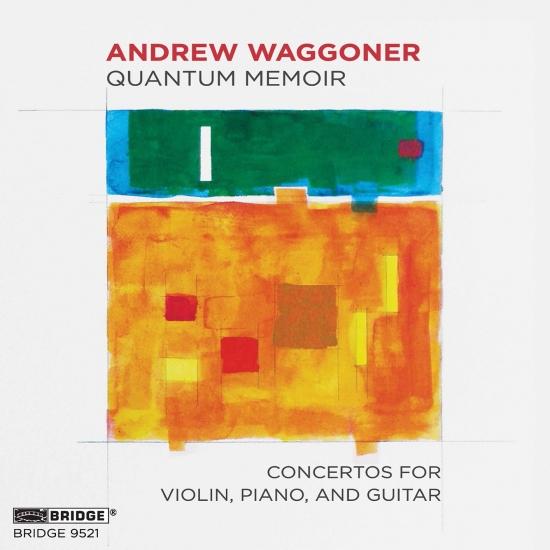 Quantum Memoir: Concertos for Violin, Piano & Guitar is now available from Bridge Records. Featuring soloists Michael Jinsoo Lim, violin; Gloria Cheng, piano; and Kenneth Meyer, guitar; and the Seattle Modern Orchestra, conducted by Julia Tai, the disc was recorded in Seattle in May of 2018, produced by Judy Sherman, with engineer David Sabee.
The three concertos are inter-related, virtuosic, highly dramatic, and emotionally wrenching. They constitute a multi-part musical diary spanning eight years, exploring multiple aspects of the sometimes fraught relationship between soloist and ensemble, and the different kinds of resonance that relationship can have in our own emotional lives.
Andrew Waggoner studied at the New Orleans Center for Creative Arts, the Eastman School of Music and Cornell University. Called the gifted practitioner of a complex but dramatic and vividly colored style by The New Yorker, his music has been commissioned and performed by the Academy of St. Martins-in-the-Fields; the Los Angeles Philharmonic; the Saint Louis, Denver, Syracuse, and Winnipeg Symphonies. The three concertos recorded on this program were composed between 2010 and 2013. his music has everything we have come to expect from the greatest of contemporary composersconfidence, originality, expressivity, and, above all, palpable meaning. highly original and compelling. (Fanfare Magazine)
Michael Lim, violin
Gloria Cheng, piano
Kenneth Meyer, guitar
Seattle Modern Orchestra
Julia Tai, conductor