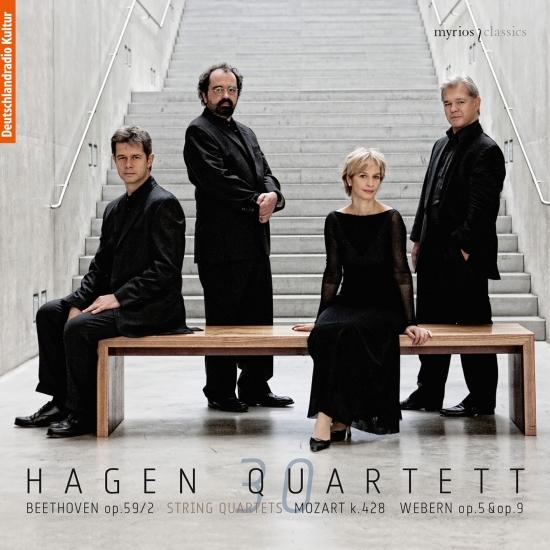 The Hagen Quartet unchallenged at the head of the international string quartet elite for 30 years captivates its listeners again and again. Five years have passed since the end of the group s exclusive contract with Deutsche Grammophon, and now the quartet presents its first recording with Myrios Classics. The anniversary album, produced in the historic Siemens Villa in Berlin, contains works by Beethoven, Mozart, and Webern three composers of central importance for the ensemble.
"Again and again, the four string players succeed in transforming the music into linguistic gestures and plastic expression: There's the unison beginning in Mozart that just wafts over the strings like an incredibly delicate breeze, there are the sforzati and chromatic sharpenings that stab with gentle pain into the gently swaying Andante. This new take on Mozart alone is breathtaking and can be addictive - but that's not all. The other pieces on the programme can also be experienced here in deeply haunting interpretations." (FonoForum)
Hagen-Quartet 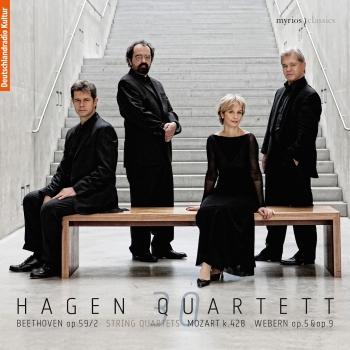 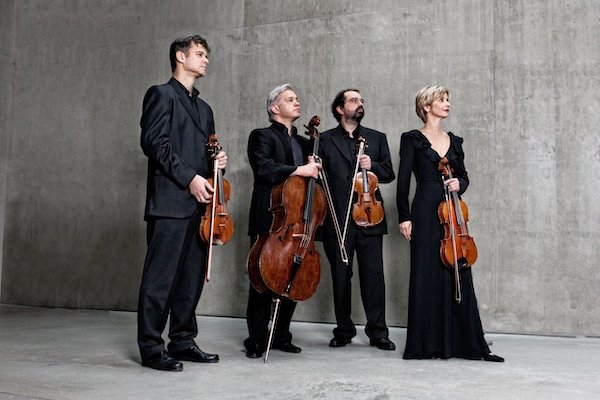 The Hagen Quartet
has been one of the world’s finest string quartets for many years and in 2021 celebrated its 40th anniversary.
Its most recent concert programmes have included Mozart’s ten great string quartets and Clarinet Quintet, the piano quintets of Shostakovich and Schumann, Schubert’s String Quintet and Jörg Widmann’s Clarinet Quintet. The Hagen Quartet’s concert series with guest artists at the Vienna Konzerthaus focussed particularly on Mozart’s quartets and quintets. The ensemble has toured to (among others) London, Brussels, Munich, Berlin, to the Elbphilharmonie in Hamburg, to Amsterdam, Wrocław, Barcelona, Madrid and Turin, to the Schubertiades in Hohenems and Schwarzenberg where they performed two concert programmes, to the Menuhin Festival in Gstaad, to the Salzburg Festival and to the Lucerne Festival, as well as to the USA and Japan.
The Hagen Quartet’s spectacular career began in 1981 in Salzburg. In its early years the Quartet had great success in competitions, and signed an exclusive contract with Deutsche Grammophon. Its decades-long collaboration with this label has resulted in numerous recordings, through which the ensemble has developed a vast repertoire and a unique profile.
Since 2011 the Hagen Quartet has worked with the record label myrios classics: its recordings of Brahms’s Clarinet Quintet with Jörg Widmann and Mozart’s string quartets received international acclaim from critics, and won prizes including the ECHO Klassik and the Diapason d’Or. In 2019 a recording of Brahms’s Third String Quartet and Piano Quintet with Kirill Gerstein followed.
The Hagen Quartet has been an honorary member of the Vienna Konzerthaus since 2012 and in 2019 won the Concertgebouw Prize for its charismatic artistic contribution to the organization over many years. The Quartet’s attractive and intelligently devised concert programmes cover repertoire from early epochs to Haydn to Kurtág, exploring the entire history of the string quartet. The Hagen Quartet has maintained and intensified its contacts with contemporary composers, both through performing existing repertoire and by giving premieres of new works. Working with artistic personalities such as György Kurtág and the late Nikolaus Harnoncourt has been as important to the Quartet as their joint appearances with fellow performers including Maurizio Pollini, Mitsuko Uchida, Krystian Zimerman, the late Heinrich Schiff, Jörg Widmann, Kirill Gerstein, Sol Gabetta, Gautier Capuçon and Igor Levit.
For many young string quartets, the Hagen Quartet is an important role model in terms of sound quality, stylistic diversity, ensemble playing and serious analysis of works and composers in their genre. As teachers and mentors at the Salzburg Mozarteum and the Hochschule für Musik in Basel, and in international masterclasses, the Quartet’s members take pride in passing on their vast experience to their younger colleagues.
The Hagen Quartet’s members perform on early Italian master instruments.