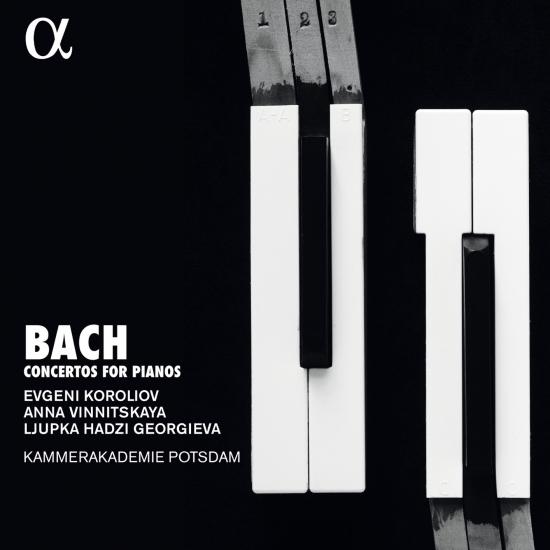 Info for Bach: Concertos for Pianos

Over the past five years, pianist Anna Vinnitskaya has made three Alpha recordings dedicated to Shostakovitch, Brahms et Rachmaninov.
Evgeni Koroliov is a great master of the piano, a great Bach specialist, whose recordings of Bach are an acclaimed benchmark. His piano duo with his wife, Ljupka Hadzi-Georgieva, has made its mark over the past few years in all the major international concert venues. Also a highly reputed teacher, Koroliov was Anna Vinnitskaya’s professor at Hamburg.
‘Though I no longer study with him, I still meet and talk with him several times a week,’ she confides. ‘That helps me further in my development, not just as a pianist but as a human being…Now that I am myself a professor at the same university, I try to carry it on, to pass his experience on to others.’
These three Slavonic pianists, who for some time have been aiming to record the Bach concertos as a team, decided to invite a German ensemble that is itself highly expert in Bach interpretation, the Potsdam Chamber Orchestra; they recorded this double album in a legendary venue where some of the greatest artists have recorded: the Jesus-Christus-Kirche in Berlin.
Evgeni Koroliov, piano
Anna Vinnitskaya, piano
Ljupka Hadzi-Georgieva, piano
Kammerakademie Potsdam 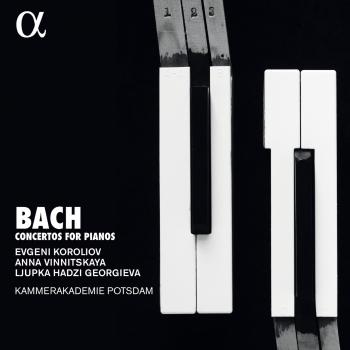 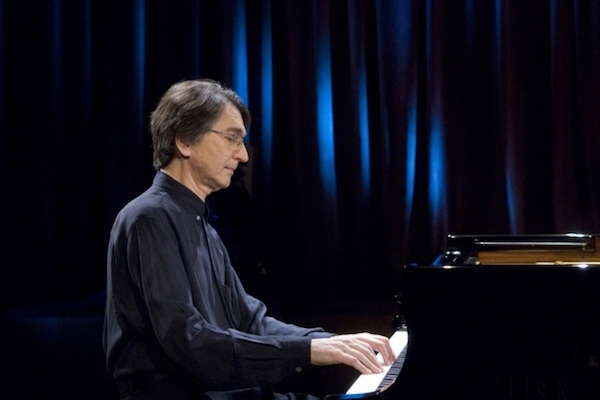 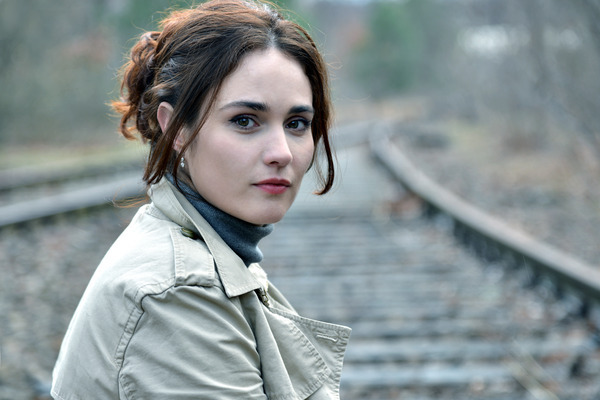 Evgeni Koroliov
born in Moscow in 1949, is known to have an extraordinary presence in the international piano scene. Far from displaying any kind of showmanship, Koroliov fascinates his public through deep intellectual understanding of the works he performs and in whose service he puts the wide range of his artistic and interpretatory abilities.
Koroliov studied piano at the renowned Moscow Tchaikovsky Conservatory. Among his teachers were Heinrich Neuhaus, Maria Judina, Lew Oborin and Lew Naumow. He won the Grand Prix Clara Haskil (Vevey, 1977) as well as several other prizes: International Bach Competition (Leipzig, 1968), Van Cliburn Competition (Fort Worth, 1973) and International Bach Piano Competition (Toronto, 1985). He resides in Hamburg since 1978 and has worked as a Professor at the Hamburg University of Music and Theatre until 2015.
His wide repertoire ranges from Baroque through Viennese Classic and Impressionism up to Ligeti and Kurtág, also having a special affinity to Bach.
Evgeni Koroliov has performed at many internationally renowned venues, including: Konzerthaus Berlin, Laeiszhalle Hamburg, Gewandhaus Leipzig, Herkulessaal Munich, Alte Oper Frankfurt, Konzerthaus Vienna, Conservatorio Verdi Milan, Teatro Olimpico Rome, Concertgebouw Amsterdam, Gulbenkian Foundation Lisbon, Palais des Beaux Arts Brussels, Palau de la Musica Barcelona, Théâtre des Champs-Elysées Paris.
He has given guest perfomances at festivals such as Montreux and Salzburg, the International Bach Academy Stuttgart, Rheingau and Schleswig-Holstein, at the Chopin Festival Warsaw, Bachfest Montréal, Settembre Musica Turin and the Festival La Roque dAnthéron. He is also a regular guest at Ferrara Musica and the Liszt Academy Budapest.
Together with Helmuth Rilling and the Bach-Collegium Stuttgart he toured Germany in 2011 performing piano concerts by Bach. In 2012 he played Mozart concertos under Valery Gergiev and the Orchestra of the Mariinsky-Theatre in St. Petersburg. He has repeatedly performed with Gidon Kremers Kremerata Baltica and András Keller’s Concerto Budapest.
In the Piano Cycle of the Berlin Philharmonic Orchestra Evgeni Koroliov was acclaimed for his rendition of Bachs "The Art of Fugue" in 2014.
Recently ago he played a Bach-cycle at the Budapest Liszt Academy, has returned for a recital in the Vienna Konzerthaus and has toured in South Korea.
Being a passionate chamber musician, Koroliov has played with colleagues such as Natalia Gutman and Mischa Maisky, the Keller Quartet and the Prazák Quartet. He performs regularly with his wife, pianist Ljupka Hadzigeorgieva, forming the Duo Koroliov.
Evgeni Koroliov has recorded for TACET, Hänssler Classic, Profil and the label of the Hessischer Rundfunk. His performance of the "Goldberg Variations"at the Bachfest Leipzig 2008 was published by EuroArts on DVD. Koroliov has received many awards for his recordings, most recently the German Record Critics Award for a CD with solo and duo works by Bach together with Ljupka Hadzigeorgieva, and the International Classical Music Awards (ICMA) Solo Prize for his latest Schubert CD.
Anna Vinnitskaya
Whoever witnesses Anna Vinnitskaya in concert is inevitably enthralled by the aura of this artist. Audiences and critics alike celebrate her ability to paint grand canvases, aside from sparking spectacular fireworks. Her technical splendor is not a virtuosic means in itself, but blends with a natural, always colorful sound. Anna Vinnitskaya is a major pianist of our time who tells stories with her music.
Vinnitskaya’s repertoire spans from Johann Sebastian Bach to Sofia Gubaidulina. Her particular emphasis lies on the great Russian piano composers such as Rachmaninov, Prokofiev or Shostakovich, as well as the colourful piano works of Ravel, Debussy and Chopin. In the past few years, her readings of Brahms and Bartók have caused a stir.
The first prize at the Concours Reine Elisabeth in Brussels in 2007 marked the beginning of Anna Vinnitskaya’s international career. Among the conductors with whom she has collaborated are stars of the younger generation such as Andris Nelsons, Kirill Petrenko or Krzysztof Urbanski, as well as seasoned masters such as Vladimir Fedoseyev and Marek Janowski.
Highlights of the 2018-19 season include Vinnitskaya‘s debuts withSächsische Staatskapelle Dresden and the Danish National Symphony Orchestra. She returns to the Elbphilharmonie Hamburg for three major projects - with the Schleswig-Holstein Festival Orchestra, the Deutsche Kammerphilharmonie Bremen and the NDR Elbphilharmonie Orchester. Other season highlights are her concerts with the Rundfunk-Sinfonieorchester Berlin, WDR Sinfonieorchester Köln, SWR Symphonieorchester and City of Birmingham Symphony Orchestra.
Anna Vinnitskaya’s recordings have been recognised with numerous awards, such as the Diapason d’Or, the Gramophone Editor’s Choice and the ECHO Klassik. On her latest album she presents Rachmaninov’s Piano Concerto No. 2 and Paganini Rhapsody, with theNDR Elbphilharmonie Orchester and Krzysztof Urbański.
Born in the Russian city of Novorossijsk, Vinnitskaya has called Hamburg her home since 2002. A former master student of Evgenyi Koroliov at the Hamburg conservatoire, she now is a professor there herself – that is, when she’s not touring the stages of the wide musical world.