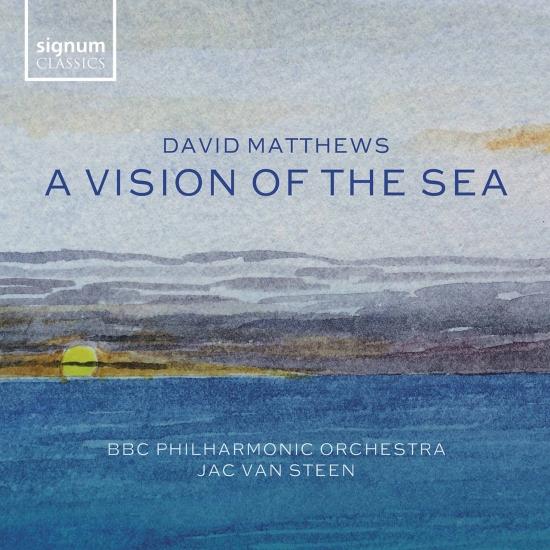 Info for David Matthews: A Vision of the Sea

A frequent collaborator with both the BBC Philharmonic Orchestra and Jac van Steen, David Matthews’ new recording explores both the natural world and the symphonic idea, the second of which has, in his words, “obsessed me since I started composing at the age of 16”.
As well the Sinfonia and Symphony No. 8, the programme includes Toward Sunrise; inspired by the sound of the sun (a rising fourth of C-F), as recorded by scientists at Sheffield University, and A Vision of the Sea; drawn from the sights and sounds of English Channel near the composers’ home in Deal, Kent.
With a singular body of work spanning almost 60 years, David Matthews has established an international reputation as one of the leading symphonists of our time. Born in London in 1943, he began composing at the age of sixteen. He read Classics at the University of Nottingham – where he has more recently been made an Honorary Doctor of Music – and afterwards studied composition privately with Anthony Milner. He was also helped by the advice and encouragement of Nicholas Maw and spent three years as an assistant to Benjamin Britten in the late 1960s. In the 1970s a friendship with the Australian composer Peter Sculthorpe (leading to collaboration and numerous trips to Sydney) helped Matthews find his own distinctive voice.
BBC Philharmonic Orchestra
Jac van Steen, conductor 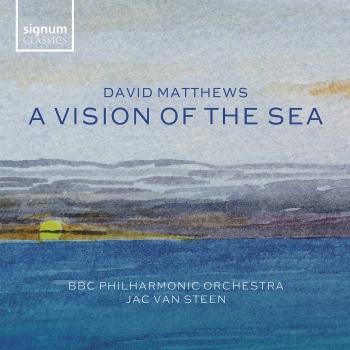 David Matthews: A Vision of the Sea

Jac van Steen
was born in Eindhoven, The Netherlands and studied conducting at the Brabants Conservatory of Music. In September 1985 his participation in the BBC European Conductor's seminar resulted in guest engagements with the BBC Philharmonic Orchestra.
From 1986 to 1990 he was conductor and music director of the Bach Choir in Nijmegen. He was also Music Director of the National Ballet, Amsterdam, a post which he held up until the end of the 1993-94 season. The Bochumer Symfoniker in Germany appointed him in the 1992-93 Season as their permanent guest conductor, a position which he held until September 1994.
In September 1997, Jac van Steen was appointed chief conductor of the Nuerenberg Symphony Orchestra in Germany and in September 1999 was also appointed Chief Conductor and Music Director of the New Berlin Chamber Orchestra.
In August 2002 Jac van Steen became Music Director of the Deutsches National Theater Weimar and chief conductor of the Staatskapelle Weimar (up to August 2005) and in that same year he took up the position of chief conductor of the Musikkollegium Winterthur, Switzerland.
As per August 2007, Jac van Steen has been appointed General Music Director of the Dortmund Philharmonic Orchestra and Opera Theatre Dortmund, a position he held for 5 seasons.
His first visit to the BBC Symphony Orchestra in London in 1997 lead to immediate return engagements, CD recordings and his Proms debut. In August 2005 he returned to the Proms with the BBC National Orchestra of Wales, which also marked the formal start of his appointment as Principal Guest conductor with this orchestra. Besides his BBC engagements, he works both in concert and recordings with various orchestras and ensembles in the U.K., such as the London Sinfonietta, the Royal Scottish Orchestra, the Halle Orchestra, the CBSO Birmingham, CBSO Youth Orchestra, Royal Philharmonic London, Philharmonia London, BBC Philharmonic Manchester , Bournemouth Symphony Orchestra. He is a regular guest conductor with the finest Dutch, Swiss and German orchestras and made his debut in Japan in 2017 with the New Japan Philharmonic.
At present he is Principal Guest conductor of the Ulster Orchestra (Belfast) and the Prague Symphony Orchestra (CSSR).
Jac van Steen has built up a large opera repertoire, working extensively with acclaimed opera houses such as Weimar and Dortmund, as well as with Opera North and the Garsington Opera in the UK and the Volksoper in Vienna. In 2018-19 he will make his debut with the Oslo Opera with two productions.
Beside his activities as a conductor, Jac van Steen also teaches conducting at the Royal Conservatory of Music in The Hague. Working with young musicians and students are of great importance to him and he is one of the initiators of the ‘National Masters’ of the Royal Conservatory of The Hague, an initiative which offers a selected group of young conducting students to work with various Duch professional orchestras as part of their education. Orchestras such as the The Hague Philharmonic, the Netherlands Philharmonic and several of the provincial orchestras have joined and offer these master students a chance to prepare and work in concert with them. He also frequently works with the Chetham School of Music, the Royal Northern College of Music in Manchester as well as the Royal Academy of Music and the Royal College of Music, both in London. In the Summer of 2011, Jac van Steen participated in the Summer Tour of the ECYO (European Community Youth Orchestra), conducting concerts in Austria and in the Amsterdam Concertgebouw, and has conducted the CBSO Birmingham Youth Orchestra on several occasions. In May - July 2018 he will lead the Jette Parker Young Artists Showcase organised by the Royal Opera House Covent Garden London.

Booklet for David Matthews: A Vision of the Sea