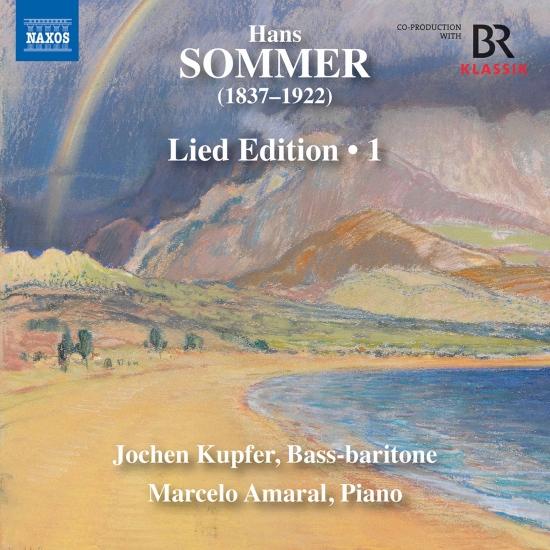 Hans Sommer was a respected composer in his day and achieved widespread popularity with his songs, especially the melodic and catchy pieces in Op. 4 and Op. 5. One biographer described him as ‘a direct predecessor of Hugo Wolf… the lines that start out with Schumann and Liszt meet in Sommer’, and his friend Richard Strauss considered him ‘an outstanding artist’. Quirks of publishing resulted in Sommer’s work being forgotten for a century, with the sensitive light and shade of his songs Op. 30 and Op. 40 remaining virtually unknown. As a result, this album includes mostly world premiere recordings.
"A prolific German Lieder composer, Hans Sommer had long fallen into oblivion when the bass-baritone, Jochen Kupfer, and pianist, Marco Amaral, discovered him.
It is an unusual story that the accompanying booklet relates, Sommer having been born in Germany in 1837, he became a hugely successful scientist, and was now the Director of the highly regarded Technical University in the town of Brunswick. It was the seeds that had been sown in his teenage years that would, in his mid-forties, germinate to lead him into the totally different life as a composer of some repute. His desire to erase his name as a scientist brought about a move to Berlin to start life all over again. That fell short of his expectations, and instead he chose Weimar, already a venue for artists of all persuasions. There he met Richard Strauss, the two, of vastly differing age, striking up a friendship. It was the influences of Wagner, from his ‘student’ days, that could then be married to the personal and outgoing Strauss influences. Having achieved a status in the musical world, in his later years he tried to follow the path of modernism, but his own descent into obscurity was already predestined. He must have been well-versed in literature having chosen the suitable texts for over 300 sings, and here Kupfer and Amaral resurrect his Lieder over the period 1876 to 1901. They have discovered music of enviable quality that has been submerged by the woks of famous named composers of that era. So at last Sommer is now fortunate in having Kupfer as a champion, his beautiful and ideally fresh sounding voice phrasing each song with obvious affection, Amaral moving in perfect accord. This is the first disc in a projected series, the Bavarian Radio recording absolutely ideal in its warmth and clarity." (David’s Review Corner)
Jochen Kupfer, bass-baritone
Marcelo Amaral, piano 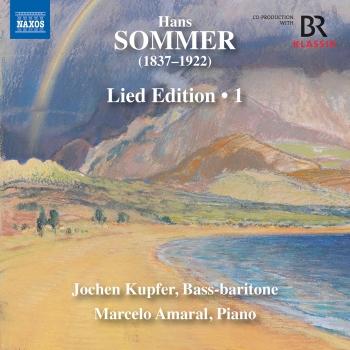 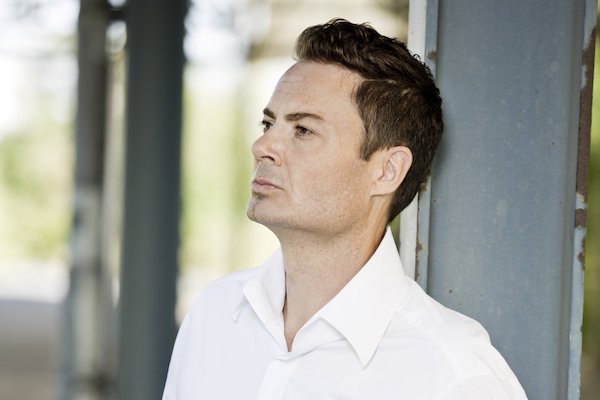 Jochen Kupfer
is one of Germany’s most sought-after singers. His guest appearances in the world’s concert halls and opera houses have been internationally celebrated.
In addition to his engagements at the Staatstheater Nürnberg and the Semperoper Dresden guest appearances have taken Jochen Kupfer to the opera houses in Tokyo, Beijing, Strasbourg, Zürich and to the Teatro Colón in Buenos Aires, to the Vienna Volksoper, the opera house and styriarte Graz, to Staatsoper Hamburg, Komische Oper Berlin, Oper Leipzig, Staatsoper Unter den Linden in Berlin and Bayerische Staatsoper München.
Highly acclaimed role debuts in preceding seasons included Wozzeck in Berg's opera of the same name, Andrej Bolkonski ( Prokofiev War and Peace), Stolzius (Zimmermann, Die Soldaten), Gunther (Götterdämmerung), Mandryka (Arabella), Kurwenal (Tristan und Isolde) as well as Orest (Elektra), the broom-maker (Hänsel und Gretel), the Bad Guys (The Tales of Hoffmann), Escamillo (Carmen), the title role in Rossini's Guillaume Tell, Giorgio Germont (La Traviata) and Pizarro (Fidelio).
His debut as Beckmesser in Die Meistersinger von Nürnberg (Staatstheater Nürnberg) in 2011 was described as "just brilliant" (Opernwelt) in the press.
Jochen Kupfer's debut at the Glyndebourne Opera Festival 2016 as Beckmesser was acclaimed as "Beckmesser sings gloriously…" (Daily Express).
He has given recitals and concert performances throughout Europe, in Japan, Mexico, Brazil, Hong Kong, Israel and the United States and at international festivals as well. His repertoire includes Johann Sebastian Bach's passions and Haydn's Schöpfung as well as the romantic oratorios, Orff's Carmina burana and also the famous Lied cycles and Lieder from the late romantic period up to classical modernism.
In 2018 he sang for the first time his scenic Lied recital WANDERER at Staatstheater Nürnberg.
Jochen Kupfer has appeared with famous conductors including Giuseppe Sinopoli, Kurt Masur, Riccardo Chailly, Krzysztof Urbanski, Dirk Kaftan, Constantin Trinks, Raphael Frühbeck de Burgos, RenéJacobs, Philippe Herreweghe, Jeffrey Tate, Enoch zu Guttenberg, Christof Prick, Kent Nagano, Fabio Luisi, Yuri Temirkanov, Paavo Järvi and Herbert Blomstedt.
The first-rate releases of Schubert’s Winterreise (CD, MeisterKlang) and Wagner’s Die Meistersinger von Nürnberg on DVD have added to his numerous other recordings in the recital and concert repertoire.
In 2016 Jochen Kupfer has been awarded the honorary title Bayerischer Kammersänger. Since 2019 he has been professor for singing at Hochschule für Musik Würzburg.
When he was only nine years old, he got his first singing lessons at the music school of his native town of Grimma. He studied with Helga Forner (Musikhochschule Leipzig) and attended Master Classes with Theo Adam, Elisabeth Schwarzkopf and Dietrich Fischer-Dieskau, completing his studies with Rudolf Piernay, Harald Stamm and Dale Fundling.