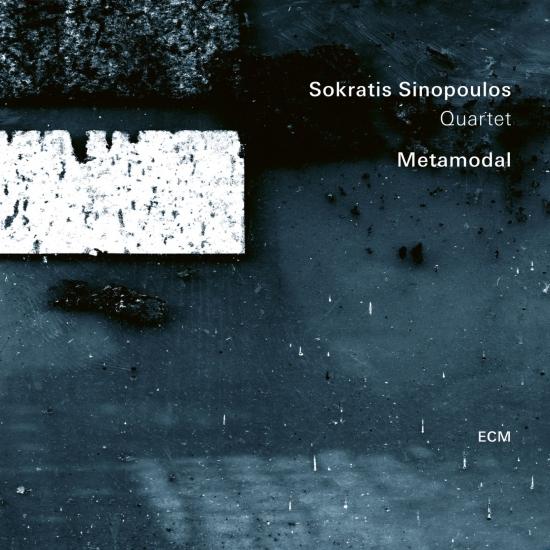 Four years after the critically lauded Eight Winds the Athens-based Sokratis Sinopolous Quartet returns with the aptly-named Metamodal. A unique band, the quartet subtly sifts a vast pool of influence, its music informed by the players’ experience of folk forms, Byzantine and classical music, and many modes of improvising, including jazz. The combination of Sinopoulos’s lyra, with its yearning, ancient tones, and the sensitive, modern piano of Yann Keerim is particularly beguiling, and the group as a whole has made giant steps since its debut. Metamodal, featuring new pieces by Sokratis and a concluding group improvisation, was recorded at Sierra Studios in Athens, and produced by Manfred Eicher.
Of the quartet and its progress, Sokratis says: “We are four people who continue to meet and exchange music and thoughts, braver now in experimenting with new concepts, and with the interaction between us. For me the quartet is the ideal group for exploring compositional ideas and new forms, and I really like the fact that we are able to keep the spark and the fire burning like it’s the first time we meet every time we play.”
The album begins with Sokratis playing his aching “Lament”, outlining troubled beauty against poignant chords in the piano from Keerim. The lyra at once embodies the qualities that Charles Lloyd has spoken of: “When Sokratis Sinopoulos plays, I can see all the history vibrating with the ancient sounds of the strings.”
The history of the lyra reaches back to the Byzantine era. “I’m very conscious of it,” says Sokratis, “and glad to play an instrument with such a long tradition. Of course, the history can also be a weight, a responsibility to carry. Especially where I live in Greece there are expectations of how the lyra should sound in traditional contexts, in folk music. I respect the history but seek to use it as a base from which to move forward, hoping to mirror the past and the future in my writing and improvising.”
The most forward-looking pieces on the present recording may be the three “Metamodal” pieces here, subtitled “Liquid”, “Illusions” and “Dimensions”. Sinopoulos: “From the compositional point of view these pieces are the core of the album to me. Starting from the modal system I know best, the medieval approach, I tried to create new dimensions and systems and bring them into what we understand as modality here in the Eastern Mediterranean region. In other words, creating new modes and developing them melodically, using the knowledge that we have of all the idioms we admire, including of course jazz, as well as contemporary composition. Sometimes the pieces were developed until I arrived at the point where the music became quite abstract, which I liked in this case.” The album title has open-ended significance for Sinopoulos. Metamodal could be interpreted as “post-modal” but Sokratis reminds us that the Greek root meta also translates as among, between, behind and in the midst of and carries the idea of changed and altered as well. “I’m interested in all the meanings that can be implied by Metamodal.”
Most of Metamodal was recorded, Sokratis notes, in a single day. On the second day, experiments were broached: “Manfred Eicher suggested we might record an improvised piece. At this point we had the whole album in our ears, so I asked the musicians to use material from ‘Metamodal II’, as well as material from the rest of the album as a basis for new music.” The result was “Mnemosyne”, the concluding piece on the album: “This improvisation is like a memory, or an echo, of the whole recording session.”
Sokratis Sinopoulos, lyra
Yann Keerim, piano
Dimitris Tsekouras, double bass
Dimitris Emmanouil, drums 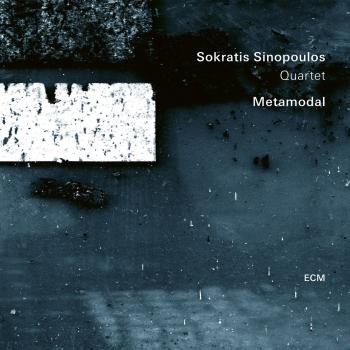 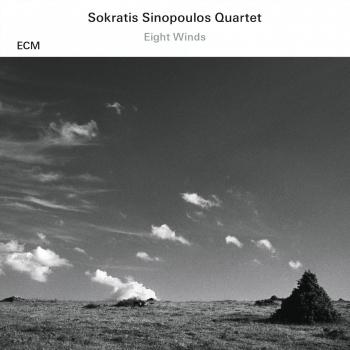 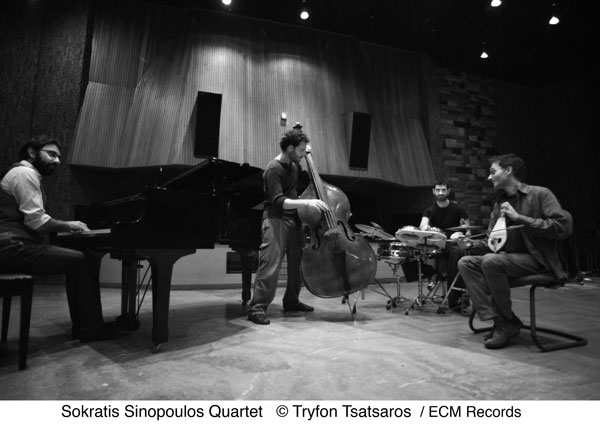 Sokratis Sinopoulos
Born in Athens in 1974, Sokratis Sinopoulos studied classical guitar, Byzantine music and folk song before taking up the lyra at age 14. Within a year he was playing with mentor Ross Daly’s group, and over the last two decades has collaborated with composers, musicians and singers from Greece and abroad. Along the way he has found his own voice as a creative musician. “I play an instrument associated with a specific tradition and live in a place where the tradition is really strong. There are many advantages to a strong tradition. It’s like having a time machine, almost, which can take you back to the medieval era or on journeys through the history of Greece, the Balkans, many countries. And I have loved all the years I have spent supporting the traditions, including the folk music traditions of the Eastern Mediterranean. But recently something else has been developing, bringing together all of my background with something, let’s say, ‘universal’.”
An encounter with pianist Yann Keerim (born Yannis Kirimkiridis in 1979 in Ionnina), a similarly open-minded musician, led to the founding of the Sokratis Sinopoulos Quartet in 2011: “With Yannis, I felt there was a connection that was about more than the instruments we played. It was more of a personal connection, and similar sensibilities.”
As pianist he has performed with jazz and ‘world music’ artists including Ara Dinkjian, Manos Achinotopoulos, and Haig Yazdjian. Dimitris Tsekouras (born 1985 in Athens) comes from a musical family. He played piano, violin, guitar and drums before settling on the bass, which he studied at the Conservatory of Athens.
Dimitris Emmanuel graduated from the Music High School of Pallini, specialized in Greek traditional percussion and Latin percussion. He won the Greek Young Artist Award in 1997 and since then has worked with many groups of traditional Greek music and dance companies.