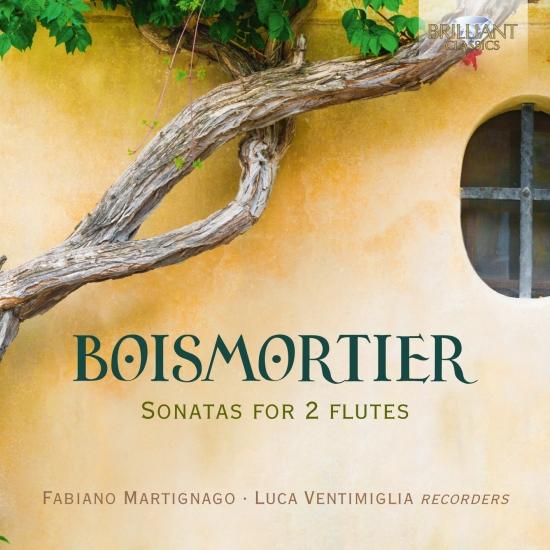 Info for Boismortier: Sonatas for 2 Flutes

Composing came easily to Joseph Bodin de Boismortier (1689–1755). Having arrived in Paris in 1724, he embarked on writing what would become a vast catalogue of instrumental music focused on the flute (or recorder), which so tickled the palates of his bourgeois and aristocratic audiences and amateur performers, and of which he was himself a considerable practitioner. In particular the works for paired flutes reveal a fluency of style that speaks eloquently for Boismortier’s fluency as a composer. The six duets collected here are first and foremost music to enjoy, both in the playing and the listening.
Boismortier’s duets reflect the rhetorical principle of elegant and refined conversation, a musical translation of intimate dialogue between two equals, neither of which is ever reduced to the role of mere accompaniment. The prevailing rule is imitation or agreement: when a theme is stated by one player it is taken over by the other and developed, never challenged or opposed. Even the three duets in his first published collection, Op.1, provide ample proof of Boismortier’s lively creative spirit as well as his skill in counterpoint, designed to attract professional players keen to show off their technical and expressive expertise.
The movement titles within each duet may encapsulate French dance forms – Gavotte, Allemande, Courante and so on – but Boismortier was far too cultivated and cosmopolitan a musician not to absorb influences from farther afield. His contrapuntal style makes him the French equivalent of Telemann, and the busy passagework recall the violin writing of Italian Baroque masters such as Corelli and Geminiani.
From the Op.8 collection of sonatas, Fabiano Martignago and Luca Ventimiglia include an example which demonstrates the composer’s mastery of long, languid forms as well as his typically concise and sunny pieces. They have also transcribed a sonata from Boismortier’s Op.40 collection originally devised for lower-pitched melody instruments such as bassoons and cellos; in their hands it speaks with no less courtly elegance as the summation of the French Baroque instrumental idiom.
Fabiano Martignago and Luca Ventimiglia are a pair of Italian early-music specialists who have contributed to several Brilliant Classics albums between them and worked with many of the luminaries in their field such as Stefano Bagliano, Manuel Staropoli and Lorenzo Casavanti, names familiar from many other Brilliant collections of Baroque-era rarities.
Joseph Bodin de Boismortier (1689-1755) was a highly successful French composer of instrumental and vocal music, the first independent composer without patron, publisher of his own works (which made him extremely wealthy).
Boismortier’s flute sonatas are a harmonious blend of the French and Italian style, pleasing to the ear, light-footed and tuneful, aimed to entertain.
The two flutists Luca Ventimiglia and Fabiano Martignago use a variety of instruments that allows them to savor the different nuances that Boismortier was able to infuse within his music, and gives the listener the opportunity to learn about different timbres that two flutes can create if played together.
Fabiano Martignago, recorder
Luca Ventimiglia, recorder 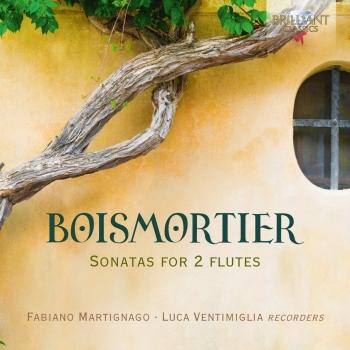 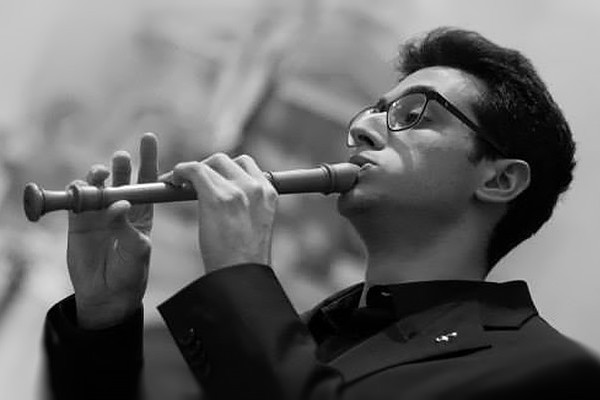 Fabiano Martignago
was born in Montebelluna (Italy) in 1994 and earned his Diploma in recorder with honours in 2012 at the A. Steffani Conservatory in Castelfranco Veneto (Treviso). In 2015 he earned his Doctor of Music Degree in Music Disciplines – recorder with honours at the A. Pedrollo Conservatory in Vicenza.
In 2009 he took first place at the National Recorder Contest organised by the European Recorder Teachers’ Association (ERTA) in Padua.
In 2011, as a soloist, he won the 8th Edition of the National Arts Award organised by the Italian Conservatories in the “Music with ancient instruments” section in Benevento.
He has also attended masterclasses, courses and ancient and Baroque music laboratories specialising with Dan Laurin, Kees Boeke, Han Tol, Stefano Bagliano, Lorenzo Cavasanti, Manuel Staropoli, Alfredo Bernardini.
He has executed many concerts in Italy and abroad (Austria, France, Switzerland, Spain, Albania) with chamber music ensembles and as a soloist, both with ancient and Baroque music repertoires; he has taken part in important concert series, National and International Music Festivals including “Steirisches Kammermusik Festival” in Graz (Austria), the XVth Edition of the “Musique de Chambre” Festival in Beausoleil (France), “Ghislierimusica” in Pavia, “L’Orecchio di Giano” in Rome, “Monteverdi Festival” in Mantova, ecc.
In 2013 he executed a concert broadcast live by the VaticanRadio from the Assunta Hall and as a flutist participated to the recording by the Italian Broadcasting Company (RAI) of the television show “Enquiry into Giorgione” at the Museo Casa Giorgione in Castelfranco Veneto (TV).
He collaborates with several groups including the “Il Pomo D’Oro” Orchestra, the “Collegium Pro Musica” Ensemble, “Arco Antiqua” and “Venice Music Project”.
He has taken part in CD recordings for Brilliant Classics, Warner Classics & Erato, Glossa and La Bottega Discantica.
In 2019 he recorded with Luca Ventimiglia a cd of duets by the author Josef Bodin de Boismortier published for Brilliant Classics; together they also founded the ensemble “La Mirandola”.
He teaches recorder at the “G. Braga” Conservatory in Teramo.

Booklet for Boismortier: Sonatas for 2 Flutes