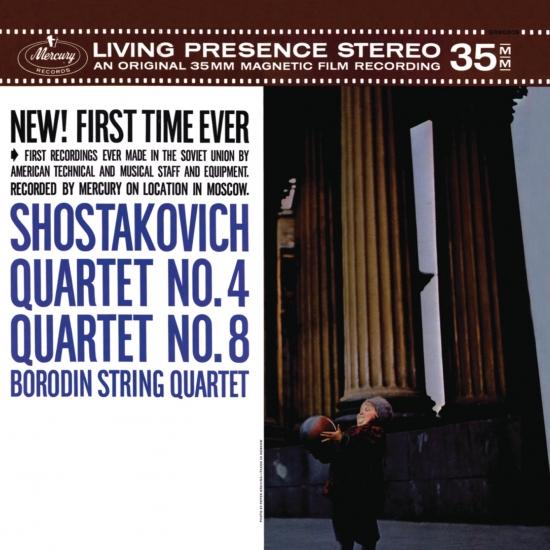 The stony path towards artistic freedom which led through the thicket of the Soviet dictatorship appeared to have become somewhat smoother for Shostakovich with this recording. It was something of a small sensation that a recording team from the West was permitted to travel to Moscow to tape and thus preserve music by a contemporary composer for the western market. And that the Mercury team brought back a recording (along with other tapes) that would stand on an exalted platform even in times of a political thaw is a stroke of luck.
The Borodin String Quartet approaches Shostakovich’s modernistic, personal style methodically and with great expression, bedded as it is in romantic musical tradition. Although it isn’t done to draw attention to the performance of one player over the remaining three, one really must mention the cellist Berlinski who plays his part in the Quartet No. 4 with breathtaking cantabile and assurance.
The Quartet No. 8 is special for a quite different reason: Shostakovich dedicated this piece to himself as a sort of personal requiem by working his initials DSCH (D, E flat, C, B natural in German notation) into the score and also included numerous citations from earlier works such as the First Symphony and Clarinet Trio op. 67. In this way both the music and the recording guarantee a very personal confrontation with the composer.
Borodin String Quartet
Recorded June 1962 in Bolshoi Hall of the Tchaikovsky Conservatory, Moscow, Russia
Engineered by C.R. Fine, Robert Eberenz
Produced by Wilma Cozart
Digitally remastered 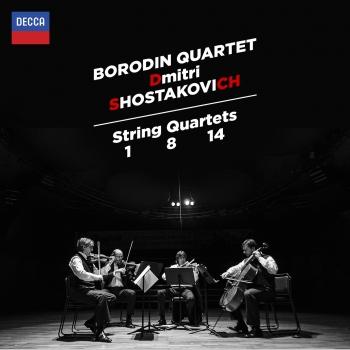 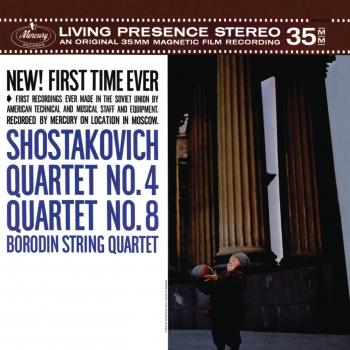 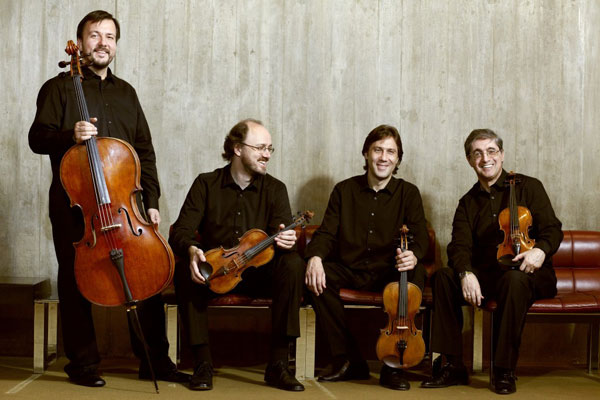 Borodin String Quartet
For more than sixty-five years, the Borodin Quartet has been celebrated for its insight and authority in the chamber music repertoire. Revered for its searching performances of Beethoven and Shostakovich, the Quartet is equally at home in music ranging from Mozart to Stravinsky.
The Borodin Quartet’s particular affinity with Russian repertoire was stimulated by a close relationship with Shostakovich, who personally supervised its study of each of his quartets. Widely regarded as definitive interpretations, the Quartet’s cycles of the complete Shostakovich quartets have been performed all over the world, including Vienna, Zurich, Frankfurt, Madrid, Lisbon, Seville, London, Paris and New York. In recent seasons the ensemble has returned to a broader repertoire, including works by Schubert, Prokofiev, Borodin and Tchaikovsky, while continuing to be welcomed and acclaimed at major venues throughout the world.
The Borodin Quartet was formed in 1945 by four students from the Moscow Conservatory. Ten years later, it changed its name from the Moscow Philharmonic Quartet to the Borodin Quartet. The current members of the Quartet are Ruben Aharonian, Sergey Lomovsky, Igor Naidin and Vladimir Balshin.
In addition to performing quartets, the members of the Borodin Quartet regularly join forces with other distinguished musicians to further explore the chamber music repertoire. Their partners have included Boris Berezovsky, Yuri Bashmet, Christoph Eschenbach, Elisabeth Leonskaja, Andras Schiff, Michael Collins, Menahem Pressler, Nikolai Lugansky, Sabina Meyer, Mario Brunello and Ludmila Berlinskaya. The Quartet also regularly gives master-classes.
The Borodin Quartet will be celebrating their 70th anniversary in 2015. Their anniversary sees them perform all over the world with dates in Moscow, Rotterdam, Tokyo, Istanbul, Montreal, Vancouver, St. Petersburg, Amsterdam, Warsaw, London, Frankfurt, Hong Kong, Berlin and Vienna to name a few. They will play the Quartet’s milestone works by Brahms, Beethoven, Schubert, Tchaikovsky, Shostakovich – and of course Borodin.
The Quartet’s first release on the Onyx label, featuring Borodin, Schubert, Webern and Rachmaninov, was nominated for a Grammy in the 2005 “Best Chamber Performance” category. The Borodin Quartet has produced a rich heritage of recordings over several decades, for labels including EMI, RCA Virgin Classics and Teldec.
The CD label Chandos recorded and released the complete Beethoven quartets as part of the sixtieth anniversary celebration.