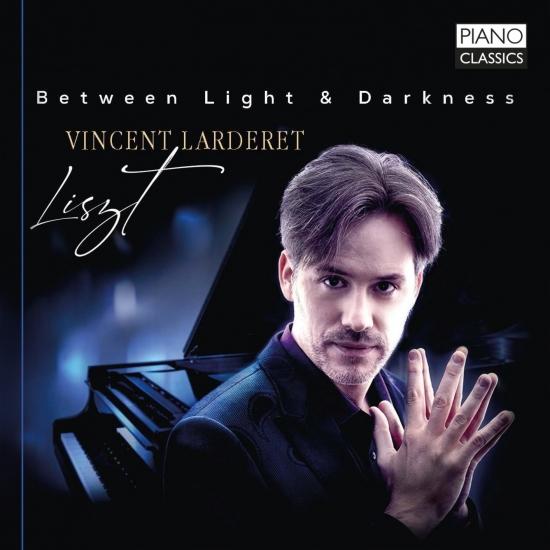 Info for Liszt: Between Light & Darkness

Vincent Larderet is a Steinway Artist who has given solo recitals at many of the world’s premier piano festivals and concert halls. He has played chamber music with the likes of Sol Gabetta, Emmanuelle Bertrand and Michel Dalberto, and the present release marks his debut on Piano Classics.
His previous albums have explored the hot-house world of Impressionism and late Romanticism, making the intoxicating world of late Liszt a natural progression. Pieces on the edge of silence and tonality such as Nuages gris and Unstern! demand at least as much refined nuance of touch and colour as the major cycles of Debussy and Ravel which Larderet has often performed in public.
In his own booklet introduction, the pianist explains that the aim of the album is to capture the unrivalled rainbow of emotions that span Liszt’s protean oeuvre for the piano. His genius in creating the genre of programme music, almost from scratch (with help from Beethoven and Berlioz), is celebrated by the inclusion of the Dante Sonata of 1849, which condenses and transfigures the narrative arc of the entire Divine Comedy within a single 17-minute span.
From four years later, the Second Ballade tells a Gothic tale of a night-ride, perhaps also the ancient Greek myth of Hero and Leander in which the hero drowns while attempting to swim across the Hellespont to visit his beloved, with the pianist called upon literally to produce wave upon wave of sound from his instrument in a masterpiece of tone-painting. The Funerailles anticipate the stern and enigmatic utterances of his very late period, condensing his rich harmonies and multi-layered voices to leave an ever-more imposing musical canvas which imbues each single note with significance and the overwhelming presence of mortality. The ‘sleepless’ vision of Schlaflos! Seems to come from another world; Larderet concludes his unique love-letter to Liszt with En rêve, which paints a more consoling dreamscape.
Between Light and Darkness evokes the varied emotions that run through Liszt’s work, expressing the struggle that symbolized the profound duality of the composer.
Franz Liszt (1811-1886) was one of the most famous musicians of the 19-th century. A traveling virtuoso, a man of the world, a dandy with (according the standard of the day) questionable morals. On the other hand Liszt took minor holy orders in his old age and strove for purity and spirituality.
The works on this recording present opposing aspects of the same person: the Dante Sonata, Ballade No. 2, Funérailles, La Notte, and a series of late works: Unstern, Nuages gris, Schlaflos, R.W. Venezia, La Lugubre Gondola, En rêve, a fascinating juxtaposition of the saint and the devil.
Played by one of the most remarkable French pianists of his generation: Vincent Larderet, whose previous recordings for Naxos and Ars Productions received many awards and 5-star reviews in Crescendo, Classica, Musica, Fanfare, Fono Forum and others.
Vincent Larderet, piano 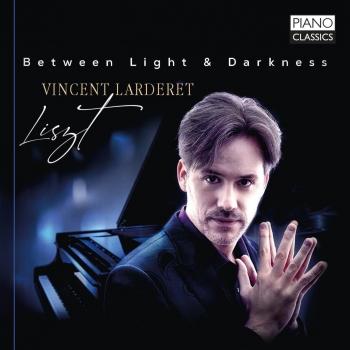 Vincent Larderet
Praised as an “impressive pianist” (MusicWeb International, UK) for his “very lyrical playing” (Crescendo Magazine, Belgium) and his “multi-timbred” sound (Fanfare, USA), he “makes the piano equal to an orchestra” (Classica, France) with a wide range of “fascinating pianistic colors” (PIANO News, Germany). His very personal and deeply inspired interpretations are often compared to the piano legends such as Michelangeli, Pollini, Zimerman and Argerich. The MUSICA magazine in Italy hailed “the ghost of Claudio Arrau” while the Toronto Star in Canada described : “his playing is remarkable for its ease as well as style. Larderet overcomes with panache”. Nominated for the "International Classical Music Awards" and "Classical Revelation" by Adami winner at MIDEM in Cannes, he is considered as one of the leading French pianists of his generation.
Vincent Larderet’s eclectic repertoire stretches from Scarlatti to Boulez, who played an important role in the romantic period, French music and during the 20th century. He also ardently favors lesser-performed composers such as Berg, Falla, Schmitt, Scriabin and Szymanowski. In 2007 he performed a series of recitals dedicated to Beethoven and especially distinguished himself with the "Hammerklavier" Opus 106 and Opus 111 Sonatas. He also participated in the complete live recording of Beethoven's 32 Sonatas, notably alongside Stephen Kovacevich for the prestigious DVD set released by Piano Passion. Internationally renowned as a Ravel specialist, he worked in Paris with Carlos Cebro who passed on to him the stylistic and musical tradition of Vlado Perlemuter and studied Ravel’s works on Perlemuter’s personal scores annotated during his collaboration with the composer. Mr. Larderet is also used to performing both the 2 Ravel Concertos during the same concert. He completed his training at the National Conservatory of Music in Rueil Malmaison where he won the “Virtuosity Prize” and perfected his art at Lübeck’s Musikhochschule in Germany with the famous pianist Bruno-Leonardo Gelber. At the same time, Vincent was a prize-winner in several international piano competitions including Maria Canals in Barcelona, A.M.A. Calabria (in Italy under the jury chairman of Lazar Berman) and Brest (France). He was also laureate of the “Orpheum Foundation for the Advancement of Young Soloists” in Switzerland. When it comes to shaping his interpretations, he is committed to a musicological approach studying and analyzing music history. He has written some essays including for the booklets of his own recordings.
Vincent Larderet has performed worldwide in recital and concerto at prestigious venues such as Zurich’s Tonhalle, Barcelona’s Palau de la Musica, Leipzig Gewandhaus, Washington Kennedy Center, Hong Kong Cultural Centre (Ravel’s Concerto in G), Tokyo Toppan Hall & Hakuju Hall, Potton Hall (UK); and major concert halls in France including the Salle Pleyel, Salle Gaveau, Cité de la Musique, Nice Opera (Beethoven's Triple Concerto), Saint-Eustache church (Beethoven’s Concerto nº4), Parc du Château de Florans (the 2 Ravel Piano Concertos), Cannes Palais des Festivals and Juan les Pins Palais des Congrès (Prokofiev’s Concerto n°3). Invited to perform at renowned international festivals and concert series (including Schleswig Holstein Musik Festival, Orpheum Music Festival, Festival Pianistico Busoni, Fantastic Pianist Series, Piano Texas, Le French May, Berlioz Festival, Besançon Festival, Boulez Festival, La Roque d’Anthéron and La Folle Journée), he also devoted himself intensively to chamber music with distinguished artists including Emmanuelle Bertrand, Yi-Bing Chu, Marc Coppey, Michel Dalberto, Nicolas Dautricourt, Sol Gabetta, Pavel Sporcl, the Debussy Quartet as well as the West Side Quartet, his group for 2 pianos and percussion. Among the esteemed conductors and orchestras with whom he has recently collaborated include Salvador Brotons, Giuseppe Cataldo, Daniel Kawka, Eric Lederhandler, Grigor Palikarov, György G. Ráth, Robert Trevino, Pierre-André Valade, the Royal Philharmonic Orchestra, the Sinfonia Varsovia, the Orchestre Philharmonique de Nice, the Orchestra Simfonica del Valles, the Czech Virtuosi Symphonic Orchestra, the Ose Symphonic Orchestra, the Orchestra Sinfonica di Sanremo and the City Chamber Orchestra of Hong Kong.
Moreover, he has served as a member of the jury at various international piano competitions, in addition to several Masterclasses worldwide. A truly dedicated artist, he has given several benefit concerts for humanitarian causes such as Amnesty International and Combating Cystic Fibrosis. His performances have been broadcasted on major radio and TV channels such as France 3, France 2, France Musique, Radio Classique, Radio Suisse Romande, SRF (Switzerland), Kultur Radio RBB, MDR, WDR, HR2 Kultur, BR-klassik (Germany), Radio Nacional d’Espanya, Civil Radio (Hungary), Radio Paris-La Paz (Bolivia), QBS (Quatar), Radio Canada, ABC Classic FM (Australia), Radio UNAM (Mexico) and Radio New Zealand. Furthermore his recordings released by ARS Produktion, NAXOS, Chandos and INTEGRAL Classic have achieved outstanding international critical acclaim as well as winning many prestigious Awards including the Classica “CHOC”, Diapason 5, Télérama 4 f, Resmusica “CLEF” (France), MusicWeb International “recording of the month” (UK), Klassik Heute “Empfehlung” (Germany), Crescendo Magazine “JOKER” (Belgium), RITMO 4 stars (Spain), MUSICA 5 stars (Italy) and Pizzicato “SUPERSONIC” (Luxembourg). He is also responsible for the major world premieres of Debussy, Ravel and Schmitt works. In 2019 he performed in the US the American Premiere of Ravel's Daphnis et Chloé Suite. The SACD-CD of the 2 Ravel Piano Concertos is praised by Fanfare magazine (USA) among “the best recordings of the year” and “the only relevant performance which could exist alongside the reference recordings of Michelangeli and Zimerman” (Klassik Heute). His album devoted to Debussy stands out as one of the recording events of 2018 in tribute to the centenary of the composer's death. A new Liszt 2 CD-Set will be released in October 2020. Mr. Larderet is also the co-founder of the Piano au Musée Würth international festival in France, which he managed as Artistic Director until 2017.

Booklet for Liszt: Between Light & Darkness