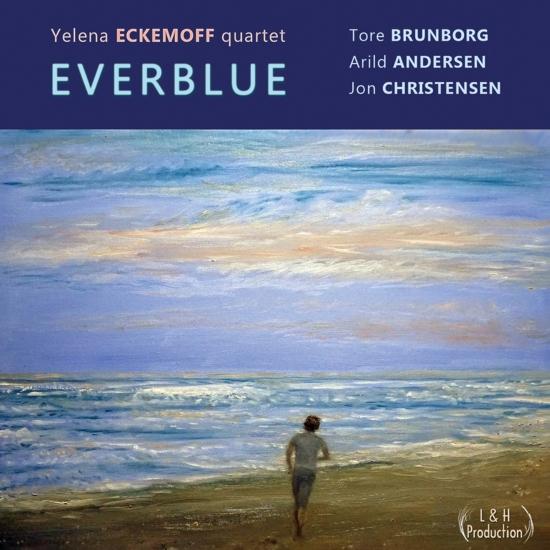 When pianist Yelena Eckemoff released Cold Sun (L & H Production, 2010) - a trio date with drumming legend Peter Erskine and Danish bass whiz Mads Vinding - the jazz world was introduced to a startlingly fresh voice destined for great things. Over the course of the six albums that followed, Eckemoff lived up to that promise, delivering organically crafted music reflective of her classical background, fascination with the natural world, poetic soul, communicative spirit, and overall open-mindedness. Now, Eckemoff is poised to make even more waves with the spellbinding Everblue, her third in-studio encounter with Norwegian bass icon Arild Andersen and her first musical meeting with two other Norwegians of note - drummer Jon Christensen and saxophonist Tore Brunborg. (from Press Release by Dan Bilawsky, AAJ)
Over the course of the past five years, Eckemoff has managed to evolve into one of the most uniquely expressive artists operating in jazz. But the last five years don t tell the whole story. Yelena Eckemoff was born and raised in Moscow, Russia, where she excelled early on at the piano. She furthered her studies at the Moscow Conservatory, where she received extensive classical training, but she eventually put her artistic ambitions aside to focus on raising her children. After a move to the United States and a period of relative artistic silence, she came roaring back to music, recording more than a dozen albums works that touch on classical music, Russian songs, and original compositions between 1993 and 2009. While her interest in jazz grew during those years, it was only a private pursuit. In 2010, however, she took her jazz ambitions public, releasing Cold Sun. That got the ball rolling and a flurry of incredible musical activity followed. Six more albums arrived in short succession, each managing to turn more heads as the critics and listening public took note. Now, with the coming of Everblue, Yelena Eckemoff is set to win over a larger audience. (Dan Bilawsky)
Yelena Eckemoff, piano
Tore Brunborg, saxophones
Arild Andersen, bass
Jon Chistensen, drums