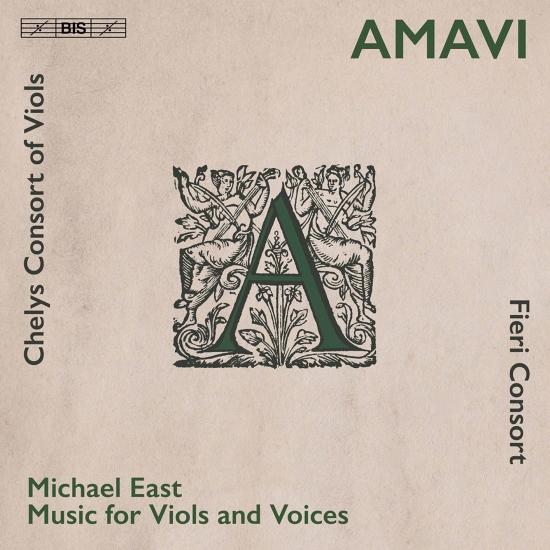 Info for Amavi: Music for Viols & Voices by Michael East

The eight fantasias for five viols, interspersed with anthems and madrigals, concluding with Now are my thoughts at peace, a newly-commissioned work by Jill Jarman.
Running through this album is a path from despair and sin through revelation, repentance and belief, to life, triumph and finally love. The stations on the way are eight five-part fantasias for viols by Michael East (1580–1648), unusual in that each of them has a Latin title – from Desperavi to Amavi. In his time, East was one of England’s most published composers with seven books of his compositions in print, all of them containing music for viols and voices. The fantasias are here performed by the five members of Chelys Consort of Viols, who together with the singers in Fieri Consort have selected vocal items by East to complement each of the instrumental pieces. Regretting the lack of modern repertoire for this combination the performers have also commissioned a new piece by the composer Jill Jarman. Setting a verse by Sir Henry Wotton, a contemporary of East, Now are my thoughts at peace sums up the journey of the fantasias from Desperavi to Amavi, 400 years after they were written.
Chelys Consort of Viols
Fieri Consort 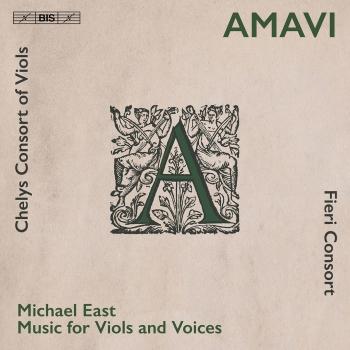 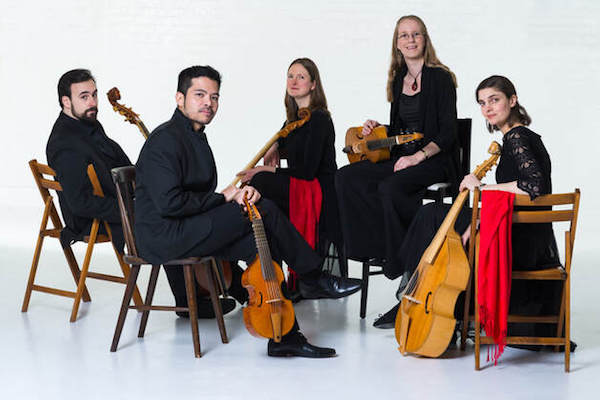 Fieri Consort
In 2017, Fieri Consort were awarded the Cambridge Prize at the York Early Music Festival. The Consort have released three albums to critical acclaim with their first disc – Tears of a Lover – being awarded ‘Choral Choice’ of the month by BBC Music Magazine. Fieri are looking forward to the release of a fourth recording – a collaboration with the Chelys consort of viols on the music of Michael East on the BIS label in December 2020. In 2019 Fieri performed at the Wigmore Hall as part of Dame Emma Kirkby’s 70th birthday celebrations.
2014, The Brighton Early Music Festival selected the Fieri Consort to participate in their prestigious Young Artist’s Programme, Bremf Live!, and in the same year, the group embarked on its first international tour to Australia, working with local singers and performing in Adelaide, Sydney and Brisbane. In 2017 they returned for a second tour and are planning a third trip for 2021. Fieri has featured on BBC Radio 3 several times, performing in their lunchtime concert series and live on ‘In Tune’ and ‘The Choir’.
Fierce, proud, and fiery. Exquisite blend quickly emerges as a touchstone for the intense programme… a group that gives some of the best in the business a run for their scudi. (BBC Music Magazine 2017)
Chelys Consort of Viols
Described by Gramophone as having released 'unquestionably the most beautiful recording of the Lachrimae', Chelys have garnered a reputation for their faithful yet fresh interpretations of the consort repertoire. They take their name from an ancient Greek word which referred to a bowed lyre, said to have been invented by the god Hermes. The word was borrowed by the English violist Christopher Simpson on the title page of his treatise 'The Division Viol' when he translated the work into Latin. Perhaps this is what inspired their world premiere recording of Simpson's Airs for two trebles and two basses, a disc described as ‘wonderfully supple, propulsive and alive’ by the Guardian.
The members of Chelys are among the UK’s leading exponents of the viol, particularly as a consort instrument, and their consort viols are strung entirely in gut (not strings overwound with metal), which lends them a particularly distinctive sound. They frequently collaborate with other period instrumentalists and singers, particularly enjoying repertoire for voices and viols. A recent highlight has been a project with vocal consort Fieri, performing and recording the complete 5-part viol fantasias of Michael East alongside some of East’s compositions for voices and viols. The two ensembles also commissioned a piece from award winning composer Jill Jarman, to celebrate writing for voices and viols 400 years after East published his pieces. Chelys were delighted to join Dame Emma Kirkby for her 70th birthday celebration concert at the Wigmore Hall last year, and their performances and recording of Dowland with Emma and lutenist Jamie Akers have been beautifully melancholic!
The consort record for the BIS label. Most recently they have been performing and recording the music of Henry Purcell, some of the latest, and many would say best music written for the viol consort. Their discs have received considerable critical acclaim, being praised by BBC Music Magazine for their 'light as gossamer' sound, and the Guardian.
The members of Chelys can be found in all sorts of other places in the wider Early Music world: playing with ensembles such as the Rose Consort of Viols, Fretwork, Musica Secreta and Ceruleo, teaching on courses including the Benslow Trust, NORVIS, Dartington, the Irish Recorder and Viol Summer School, the Easter Early Music Course, and coaching viol consorts at the Royal College of Music and Oxford University.

Booklet for Amavi: Music for Viols & Voices by Michael East