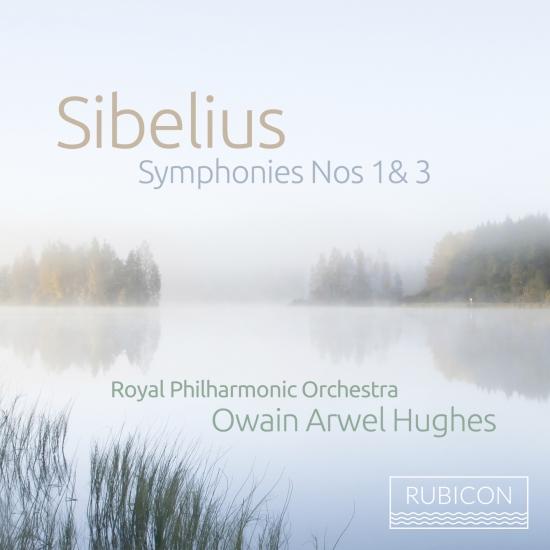 The first in a cycle of all seven of Sibelius’s symphonies sees the first dating from 1899 coupled with the third from 1907.
No.1, although bound by classical conventions and the influence of Tchaikovsky, displays a remarkable and striking independence of thought.
No.3 shows the composer making the transition from the large-scale symphonic structures of the first two symphonies to the more compact, tightly argued symphonies to follow.
Like the 5th, the C major work is in three movements and the clean, highly individual instrumentation marks it as the first of the symphonies in his mature style.
The sunny brisk nature of the Third belies its importance among the seven symphonies.
Royal Philharmonic Orchestra
Owain Arwel Hughes, conductor 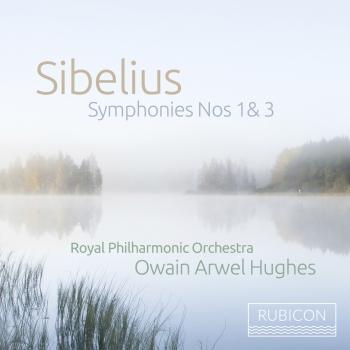 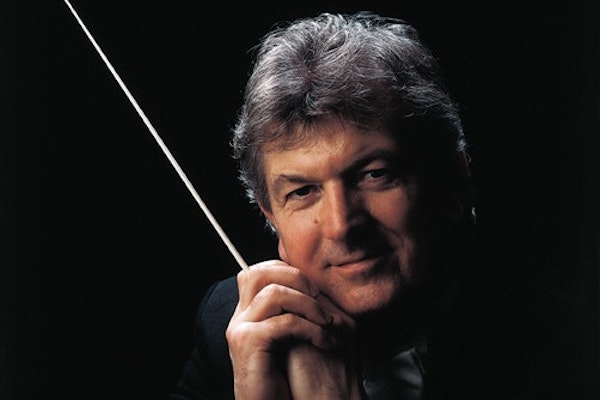 Owain Arwel Hughes
is one of the busiest and most popular British conductors. He has enjoyed great success as assistant conductor of the BBC Welsh Symphony Orchestra and the Philharmonia Orchestra, and works today with all the major British orchestras In 1995 he was appointed Principal Conductor of the Aalborg Symphony Orchestra, but has continued to work as a guest conductor for European orchestras. In 1992 he made his debut in Japan with the Osaka Symphony Orchestra. Owain Arwel Hughes has wide experience of the symphonic repertoire and of British music in particular, and enjoys great recognition for his interpretations of the great works of choral literature. He has performed many times on TV and has made recordings, including two for EMI which brought him gold records. He has now concluded his series of recordings of all Vagn Holmboe's symphonies with the Aarhus Symphony Orchestra. In 1986 he launched the Welsh Proms in Cardiff, where, as Artistic Director, he has created a very successful annual event.
Royal Philharmonic Orchestra (RPO)
As the Royal Philharmonic Orchestra (RPO) approaches its seventy-fifth anniversary in 2021, its mission to enrich lives through orchestral experiences that are uncompromising in their excellence and inclusive in their appeal, places the RPO at the forefront of music-making in the UK. Performing approximately 200 concerts each season and with a worldwide audience of more than half-a-million people, the Orchestra embraces a broad repertoire that enables it to reach the most diverse audience of any British symphony orchestra. Whilst artistic integrity remains paramount, the RPO is unafraid to push boundaries and is equally at home recording video game, film and television soundtracks and working with pop stars, as it is performing the great symphonic repertoire.
The RPO collaborates with the most inspiring artists and looks forward to welcoming its new Music Director, Vasily Petrenko, in September 2021. Vasily Petrenko will join a roster of titled conductors that includes Pinchas Zukerman (Principal Guest Conductor), Alexander Shelley (Principal Associate Conductor) and Grzegorz Nowak (Permanent Associate Conductor).
Cadogan Hall in London has been the Royal Philharmonic Orchestra’s home since 2004. Here it performs an annual season of concerts, many of which are subsequently toured to its seven principal residency venues. In addition, the Orchestra promotes more than forty-five concerts each season at partnership venues across the country, several of which are in areas where access to live orchestral music is very limited. In London, the Orchestra also promotes a season of symphonic concerts at the Southbank Centre’s Royal Festival Hall and a popular series at the iconic Royal Albert Hall, where it has recently been appointed as the Hall’s Associate Orchestra.
As a respected cultural ambassador, the RPO enjoys a busy schedule of international touring, performing in the world’s great concerts halls and at prestigious international festivals. This season’s touring highlights include visits to Belarus, Slovakia and a three-week tour of the USA.
The RPO is recognised as being the UK’s most in-demand orchestra, an accolade that would have pleased Sir Thomas Beecham, who founded the RPO in 1946. His mission was to lead a vital revival of UK orchestras after World War II and form an ensemble that comprised the finest musicians in the country. The Orchestra has since attracted a glittering list of principal conductors, including Rudolf Kempe, Antal Doráti, Walter Weller, André Previn, Vladimir Ashkenazy, Yuri Temirkanov, Daniele Gatti and Charles Dutoit.
The RPO aims to place orchestral music at the heart of contemporary society, collaborating with creative partners to foster a deeper engagement with communities to ensure that live orchestral music is accessible to as inclusive and diverse an audience as possible. To achieve this, in 1993 the Orchestra launched RPO Resound, which has grown to become the most innovative and respected orchestral community and education programme in the UK and internationally. The programme delivers bespoke, pioneering education, community and talent development projects to a wide range of participant groups, including homeless people, children, young people and stroke survivors, always with the overarching objective to leave a lasting legacy.
The Royal Philharmonic Orchestra has always been entrepreneurial and in 1986 it was the first UK orchestra to launch its own record label. The RPO has gone on to embrace advances in digital technology and now achieves nearly thirty million downloads of its recorded music each year. The Orchestra is increasingly active online (www.rpo.co.uk) and on social media (@rpoonline) providing audiences with the opportunity to engage with the RPO and enjoy ‘behind-the-scenes’ film clips and photographs.
Passion, versatility and uncompromising artistic standards are the Royal Philharmonic Orchestra’s hallmarks, and as it looks forward to an exciting future with its new Music Director, Vasily Petrenko, it will continue to be recognised as one of the world’s most open-minded, forward-thinking and accessible symphony orchestras.